Birthday girls give up presents to help people battered by hurricanes 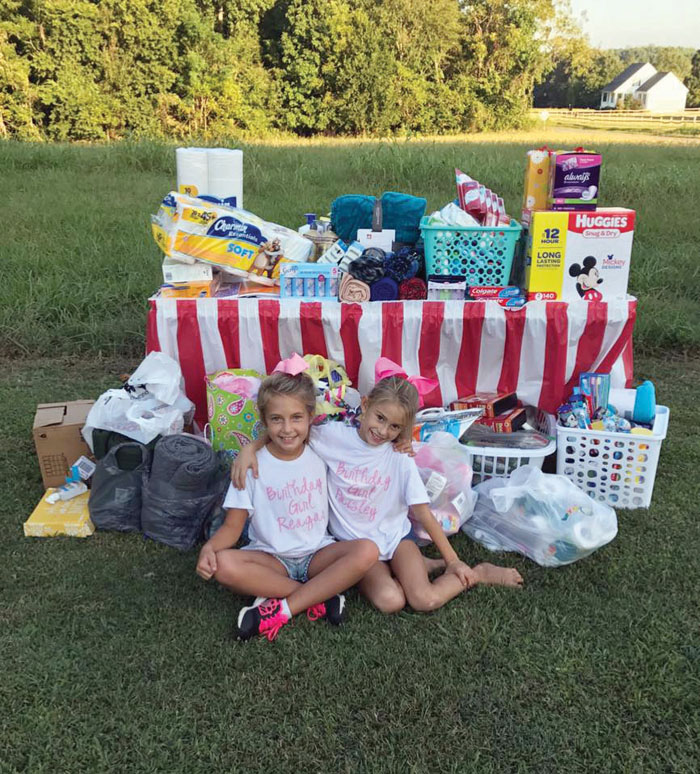 Reagan Helmbold and Paisley Miller with items collected for hurricane relief at their joint birthday party.

SALISBURY — Two good friends recently celebrated their September birthdays together with a carnival-themed party — but no gifts.

Their moms told Reagan Helmbold and Paisley Miller that they already had plenty of stuff.

“Our friends brought cards to us,” added Paisley, who turned 8 on Sept. 9 — the very day of the party at Reagan’s house.

Reagan said, “We remembered that the hurricanes were going on, so we wanted to give stuff to people who were in the hurricanes, to help them.”

Callie Miller and Kristen Helmbold thought that was a great idea and suggested their girls ask for toiletry items or blankets.

And one pair of shoes.

“It was a really good variety,” Callie said.

“It made us feel good,” Reagan said.

Callie, who owns Posh Salon and Nail Bar in China Grove, met one of her clients the Sunday after the party, and the client took a car full of the donations to Texas.

“I thought we’d only fill up a Food Lion cart,” Paisley said, “but it filled up the whole vehicle.”

“Their friends were generous,” Callie said.

One woman’s husband told her to purchase $100 worth of supplies. Others brought laundry baskets of boxes full of items.

“It feels better than getting presents,” Paisley said of the duo’s efforts.

“It makes people feel like somebody actually cares about them,” Reagan added.

The two met in preschool at Christ United Methodist Church. When the girls aren’t busy doing good, they go to Millbridge Elementary School — Reagan is in fourth grade and Paisley is in second — and dance clases four days at week at Center Stage Dance Company in China Grove.

Reagan is the daughter of Andy and Kristen Helmbold. She has an older brother, Andrew, 11, and says they don’t get along very well, and that it was perfectly fine to put that in the paper.

Paisley is the daughter of Brandon and Callie Miller. She’s big sister to Kenley, 5, and Jack, 2. (“That’s J-A-C-K,” she says helpfully, after spelling her sister’s name.)

She has cows, Chihuahuas and chickens at her house. She had a cat, but it got run over.

She hopes to pass along the joy of giving to her younger siblings.

“It makes me more happy,” she said. “I’d rather do that than get a present from Santa. I hope my sister wants to do that. I know my brother will want to.”

Makes you wonder what Reagan and Paisley will come up with next.