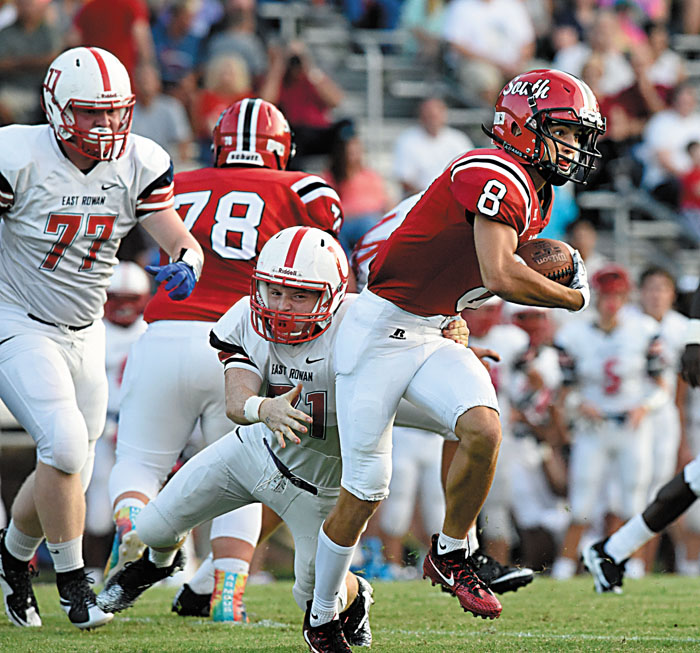 Wayne Hinshaw/for the Salisbury Post This week’s Friday Night Hero, South Rowan’s Kory Sellers (8) tries to get away from East Rowan’s Coy Ketchie (71) during a game on Sept. 4. Sellers doubles as the Raiders’ slot back and punter and sometimes plays on defense, too.

LANDIS — South Rowan senior Kory Sellers is averaging 28 yards per rushing attempt, a figure so absurd that he’s third in the county rushing stats, right up there behind East Rowan’s Sam Wall and North Rowan’s Jaleel Webster, despite having just 10 carries.

Receiving is what Sellers, a slotback who weighs 157 pounds, soaking west, is supposed to be doing most of the time, and he’s doing it well. He leads the county with 17 receptions in three games. He’s second in the county with 286 receiving yards. He doesn’t lead the county in receiving yards only because West Rowan sophomore Jalen Houston has been fantastic the past two weeks.

Sellers has come out of nowhere, absolutely from nowhere, and he’s injected a South team that needed a lift with some speed, some excitement — and some hope.

“Did I see this coming? No, not really,” South coach Daniel Yow said. “But we did know the potential was there for Kory to do some good things for us if he could just stay healthy. He’s got speed, but he’s had a lot of injuries.”

Sellers went to Landis’ Corriher-Lipe Middle School. When he arrived at South as a freshman, he didn’t know many football players,  so he didn’t go out for the team. When that happens, when a year of development goes by the wayside, it’s easy to get lost in the shuffle.

“By my sophomore year, I ‘d become good friends with (lineman) Patrick Brooks, and he talked me into going out,” Sellers said. “But I was only at practice for about a week. My physical expired, and I didn’t get it renewed.”

Brooks is a constant recruiter for South football, and he had Sellers back out for the squad as a junior. This time Sellers was fully committed to the program. Opening night, Sellers caught a 16-yard touchdown pass thrown by Austin Chrismon. That would be his only TD of the season.

“I got a concussion that kept me out for weeks,” Sellers said. “When I got back from the concussion, I sprained my ankle pretty bad. By the time I got over the ankle injury, it was late in the season and the team had kind of moved on.”

Turn the page to last winter, South’s basketball season, and it was easy to see that Sellers had a lot of quickness, but not a lot of experience. He didn’t put the ball in the hole very often, but his fast feet served him well whenever the Raiders were on defense. He could stay in front of people that no one else could stay in front of.

When Sellers’ senior football season opened with a close loss to Carson, he impacted a game for the first time. He was South’s main weapon with 52 rushing yards and seven catches for 65 yards.

“I’ve developed some chemistry and good timing with (QB) Brett Amburn,” Sellers said. “We’re good friends, and that helps. He started looking for me a lot.”

When South was pummeled by East Rowan on Labor Day, Sellers was the bright spot. There were 91 receiving yards, including a late TD on a 20-yard catch. He also piled up 86 rushing yards on three carries.

When South journeyed to East Davidson on Friday for its first Central Carolina Conference game, its first ever game ever in a 2A league, things did not go well. The Raiders fell behind, 14-0, and then their offense was stopped again at the South 24. Sellers is the punter for the Raiders,  so he stepped back in punt formation on fourth-and-13.

“We’ve got different fake punts to take advantage of Kory being the punter — one to the left, one to the right, and he can run or he can throw,” Yow said. “He’s good at the rugby punt on the move if the defense comes up to get him. If the defense doesn’t come up, then he’s got the green light.  We didn’t call for a faked punt on Friday, we weren’t going to call it that early in the game on our 24-yard line, but if  he sees it’s wide open, he’s got the option to go.”

Sellers was looking at a left side of the field that was nothing but grass, so he rolled the dice. He verbally alerted his teammates that he was taking off.

“We’d already fumbled twice, we were down two touchdowns and we needed to do something,” Sellers said. “I knew I had to be sure of making the first down in that situation, but it was just so open. Then I got good blocks from Brooks and Mohammed Dolley, and I was running by myself.”

In the final seconds of the first half, the Raiders tricked East Davidson with a hitch-and-pitch. Amburn flipped a short pass to Frankie Caraccio, and Carracio attracted a host of tacklers. That’s when he lateraled to a sprinting Sellers, and Sellers was almost gone again.

“I really should’ve scored, and I’m mad at myself that I didn’t,” Sellers said. “I thought I’d out-run everyone, and I didn’t see a guy coming from the side. He shoved me out of bounds near the 1-yard line.”

South was down big going to the fourth quarter, and two Amburn-to-Sellers touchdown passes only made the score look more respectable. Sellers beat the Golden Eagles on a vertical route for an 80-yard score and also made a 25-yard scoring reception.

He finished with 279 rushing and receiving  yards and went over 300 all-purpose yards, counting his return yards. He scored all three South TDs.

Still, it’s not like he was happy about what happened.

“We lost, and it really makes me mad when we lose,” Sellers said.

There are obvious challenges for South going forward. South has to stop turning it over four or five times and has to start giving itself a chance.

If that can be accomplished, the next challenge will be for Amburn and Sellers to work their magic against first-string defenses while the Raiders are still in games.

But there’s a lot to like about Sellers, Amburn, Brooks, and the rest of them. They’re fighting down to the last whistle, even in hopeless situations, and there’s no doubt Sellers wants to win a whole lot more than he wants to pile up stats.

“I really wish I’d gotten started sooner with football,” he said. “I wish now that I’d gone out as a freshman and I wish I’d played every year. If I’d done that, I’d be a better player right now, and maybe everyone would know who I am.”