Livingstone travels to Hampton this week 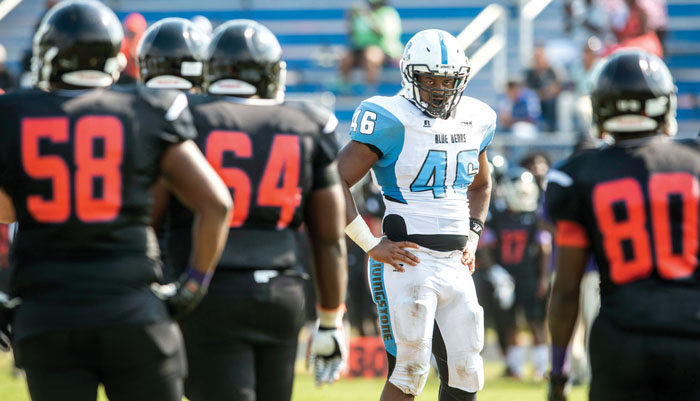 SALISBURY — It may be bad timing, but Livingstone’s football team will play up a level this week, a “money” game against FCS Hampton University.

The Blue Bears have started 0-2 again this season and a different opponent on Saturday would be nice. But you can’t change the schedule now.

“We’ve got to go up into this storm called Hampton,” said Livingstone head coach Daryl Williams on Monday. “But it’s good exposure for our players. I just want to go up to Hampton and play solid, fundamental football for two halves. We’ve played well in spots but that’s not consistently at all.”

Hampton is 1-1, winning its home opener over Delaware State, 28-15, last Friday. The Pirates played up a level themselves in the season opener, losing at FBS Ohio University, 59-0.

Game time on Saturday at Armstrong Stadium is 6 p.m.

Livingstone dropped its season opener at Benedict on Sept. 2 and then lost last Saturday, 33-13, to Kentucky Wesleyan.

The Blue Bears actually grabbed an early 7-3 lead last week in Kentucky, but things quickly went downhill from there.

“We improved on tackling from the first game, but we’re still concerned about the penalties and turnovers,” said Williams. “The officiating is what it is, but the false starts and illegal procedures, that’s on us and we need to clean it up.

“The timing of the penalties is crucial to the flow of the game and momentum,” continued Williams. “We make a stop, but get an unsportsmanlike for standing over a guy. We can’t do that.”

There were some questionable calls that went against the Blue Bears, including a 62-yard double pass play that was called back. In a 10-7 game in the second quarter, instead of having the ball at the KWC 31-yard line, the ball was brought back to the Livingstone 5. The Blue Bears were soon punting from their own end zone.

Livingstone also had two interceptions overturned by penalties, one a pick-six TD from Gregory Hines.

The Blue Bears did have some positives: Sophomore quarterback Thaddeus Bell, starting because first-week starter Xavier Longerbeam suffered a concussion, completed 25 of 37 passes for 167 yards and no interceptions. Bell was also the team’s leading rusher with 41 yards.

A newcomer at running back, Art’Kevious Nelson, gained 65 yards before losses and had a pair of 6-yard scoring runs.

Williams said the offense lacked consistency in blocking and drives would stall.

“Bell threw the ball better and our new running backs did well, but our receivers need to block better on the edge,” said Williams. “We talked about it on Sunday and if you don’t block, you don’t play. The defense is trying to do its job, so we’ve got to keep them off the field for more than three plays and a punt.”

Williams said that Bell will start against this week at Hampton.

“Thad is coming along,” added Williams. “He’s got to help the OL out and not hold the ball so long, but he’s improving and he is punting the ball for us very well, too. He doesn’t know yet how good he can be. Thad can be a great athlete at the quarterback position. He’s finally buying in. He came by last week and we just sat and talked about playing the position.”

“I feel more comfortable than last year,” said Bell. “I feel that I’ve cut down on my mistakes, and I know better now when to ‘eat it’ and when to try to make a play. But I know that I can still get better, take some coaching and stop making plays out of the system, every now and then.”

Bell also felt like the Kentucky Wesleyan game was there for the taking.

“A couple of plays that didn’t go our way really changed the momentum of the game,” added Bell. “From those plays and penalties, the tables just kind of turned on us.”

Still, Bell had his best statistical day as a collegian. “I maybe could have gone downfield a little more, but I was taking what was open and trying to stay within the game plan,” he said.

Despite the rough start, Williams is still positive.

“It’s not so bad being 0-2 because this is the first time we’ve played this tough of a non-conference schedule,” said Williams. “I know we’ll be ready when conference time comes. I explained to the team on Sunday, we’ve got to clean up some things before we get to conference play, but that’s our main objective, to be ready for CIAA play.”

After Hampton, Livingstone travels to Chowan on Sept. 23, for its CIAA opener. The Blue Bears don’t make their home debut until Sept. 30, hosting Virginia State in the West End Classic.

NOTE: Two former West Rowan Falcons play for Hampton on the offensive line — Derrick Moreland and Keldrick Wilson, both sophomores. Moreland played on the defensive line last year but has moved to offense.