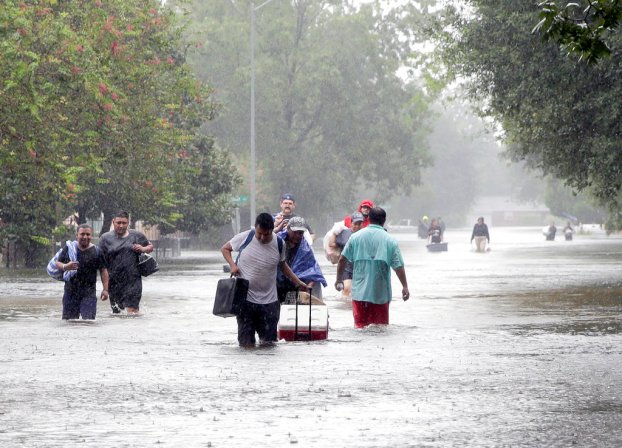 Houston residents walk through flooded streets with their belongings as Tropical Storm Harvey makes its way through the area recently. (Elizabeth Conley/Houston Chronicle via AP)

Leonard Pitts: Nickel prophets are a dime a dozen

“Be still and know that I am God.”

It’s an admonition some of us struggle to obey.

Indeed, some of God’s self-appointed spokespersons seem to find it especially difficult. Thus, before the first raindrop fell, the first palm tree bowed, or the first transformer blew, they came out to tell us what He meant by pointing a monster hurricane at Florida.

Actually, humility would require not presuming to know the mind of God (“For my thoughts are not your thoughts, neither are your ways my ways” — Isaiah 55:8) but leave that aside. The point is, this sort of thing is common. To the scornful derision of non-believers and the mortified embarrassment of those people of faith who strive to be also people of thought and compassion, every disaster seems to bring out some nickel prophet who claims to have divined the motives of the Almighty as surely as if God had asked his advice in advance.

This penchant for ascribing disaster to a peeved deity does not stop at international borders. As Haiti struggled to dig out from a devastating earthquake, TV preacher Pat Robertson said the impoverished island nation was suffering under a curse from God.

Nor is the aforementioned penchant limited to natural disasters. Jerry Falwell notoriously diagnosed the Sept. 11 terrorist attacks as God’s verdict on the ACLU, among others.

It is telling that the God such people conceive is always so perfectly in sync with their own politics and biases. It never seems to occur to them, for instance, that these calamities might be God’s way of providing an opportunity for someone to be a better human, to reach a helping hand to someone else in need, to “love one another as I have loved you.”

For that matter, it never seems to occur to them to just shut up. But it should.

As much as or more than it is anything, faith is surrender, an acceptance of one’s own smallness and limitation, a willingness to believe that whatever comes — whatever God brings, no matter how painful — will redound, in the end, to love. That can be difficult to maintain in the best of times, but in the test of times, when the wind howls or the ground heaves, it becomes exponentially harder.

That is what you are seeing demonstrated when these nickel prophets prophesize. The palm trees shred, the rain slants sideways, the ocean rises like a wall, and they speak with a pontifical certitude about What God is Trying to Say. They fill awed silence with babble that only sounds like confidence.

It is, yes, human nature to seek answers. It’s a way of asserting order upon an unruly universe. But that order is only an illusion. It doesn’t matter how loudly you blame the ACLU or the LGBTQ community, there still comes a moment when you must contemplate how small you are, how uncertain life is, as measured against the angry and capricious storm. And this is where the truth is told. After all, it’s easy to find scapegoats and call it God’s will.

What’s hard is to feel the storm rise and yet, obey that hard admonition. Be still, and know.

Other Voices: The failure of the NC lottery

If we want to know why North Carolina schools haven’t improved anywhere near as much as we need them to,... read more