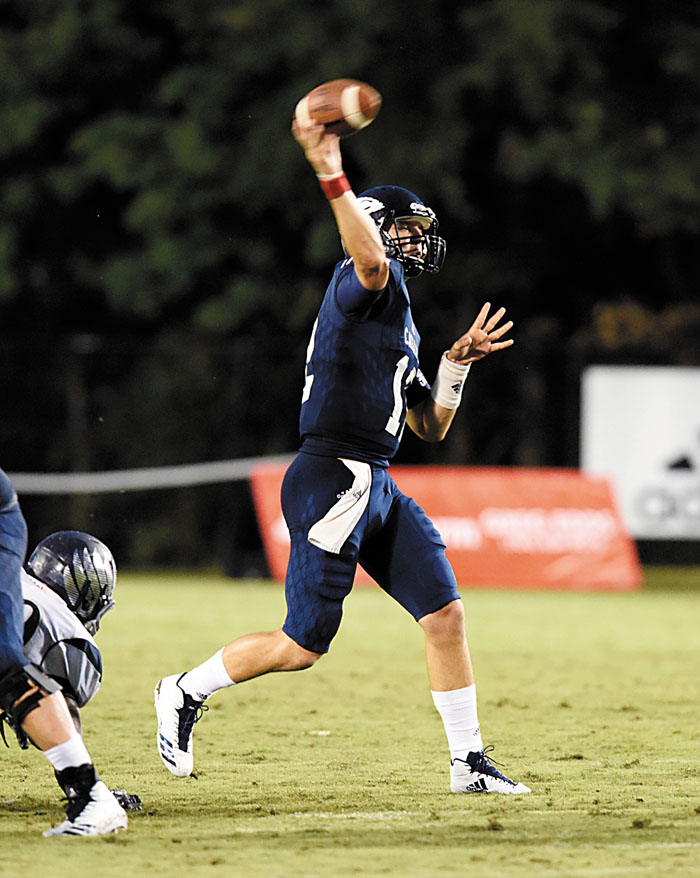 Those who went to Catawba’s Tuesday press conference expecting to find a kid with his heart racing about the Hollywood-ish adventure of leading his present school and current teammates on the road against his former school (UNC Pembroke) and a lot of old teammates on Saturday, left the room disappointed. O’Brien is not that guy.

“I’m not adding any pressure on myself this week because of who we’re playing,” O’Brien said. “This is just the next game, and it’s not going to be as hard as some people think it will be for me to play it. There will be a lot of family and friends there, sure, but there’s no extra stress on me. There’s really not.”

O’Brien will be Catawba’s starting quarterback on Saturday night at 7 p.m. at UNC Pembroke’s Johnson Stadium. Reid Carlton (foot) isn’t 100 percent, so that made it an easy decision for the coaching staff. Head coach Curtis Walker said Carlton, who was brilliant on opening night in the romp against St. Augustine’s, will make the trip, but there’s full confidence that O’Brien, who had 231 passing yards in the second half of  Saturday’s comeback win against VMI, can keep rolling.

O’Brien talks about the disappointment of Mooresville High’s 38-35 loss to Sun Valley in the first round of the 4A state playoffs in his last high school game like it took place last week, but that was a long time ago in football terms. It happened  in 2010.

That high school loss in 2010 still motivates him to find postseason success and is at least a small part of the reason he’s at Catawba now.

In 2009, as a junior at Mooresville, O’Brien was a good player, but the Blue Devils were an 0-11 team, overmatched playing 4A ball against the Charlotte schools. Then legendary coach Hal Capps turned it around the next year. O’Brien threw for more than 1,700 yards as a senior, and the Blue Devils were 8-3 and the feel-good story of the year before they ran into Sun Valley.

O’Brien was a good athlete, also playing basketball and golf for the Blue Devils, but he wasn’t overwhelmed with recruiting offers.

He headed to UNC Pembroke in the fall of 2011, 40 pounds lighter than he is now, and still trying to figure things out. He got buried on the depth chart. He redshirted in 2011.

Charlotte was starting its football program in those days, and O’Brien was excited about the idea of not only transferring closer to home, but transferring to a program that would be playing Division I. About 100 candidates attended a walk-on tryout for the 49ers. O’Brien was one of five players invited to join the team.

He actually played in Charlotte’s first-ever football game in 2013 against Campbell, but then he got buried on the depth chart again. So he transferred back to Pembroke and sat out the 2014 season as dictated by NCAA transfer rules.

Opportunity for regular playing time finally came for the patient O’Brien in 2015. He made the most of his chance, throwing for 2,380 yards and 18 touchdowns as UNCP’s starter. He was at his best against Catawba in a 38-21 loss.

O’Brien’s development continued in 2016. He ranked 27th nationally with 2,999 passing yards and threw for 22 touchdowns. He threw for 390 yards and four TDs in a 41-31 win against Catawba. He passed for over 500 yards in UNCP’s two playoff games — a win at Valdosta State and a loss to North Alabama.

O’Brien still had a year of football eligibility left, but he made the decision to transfer to Catawba. As a college graduate, he could play immediately at Catawba, but it was still surprising because he’d had two outstanding seasons at UNC Pembroke and because Catawba had a returning starting quarterback in Carlton.

“The closeness of Catawba definitely was part of it, and I’d even attended Catawba’s basketball camps growing up,” O’Brien said. “Part of it was that I’d always liked what I saw from Catawba when we played them. I liked the talent they had, and I knew they were capable of a great season. But the biggest thing was the chance to compete for a conference championship in my last year of college football. UNC Pembroke is an independent in football, and they don’t have that opportunity. Catawba gives me a chance to go after a conference championship ring, and hopefully for rings beyond the conference. I’m here mostly for that chase.”

When O’Brien explored the possibility of transferring to Catawba, Walker was enthusiastic.

“The guy had thrown for about 400 yards against us twice,” Walker said with a laugh. “But more than the stats, we liked what we’d seen of him as a person and as a leader. He was recommended by people whose opinion we respect. He has a winning mindset. We knew he could fit in with our guys.”

O’Brien’s presence brought fierce competition to Catawba’s quarterback position, but no animosity. Carlton started the first two games. O’Brien came on in relief in both games. Now O’Brien is the starter, but Carlton won’t be conceding anything.

“Reid’s been a great teammate, and he’s helped me learn the offense,” O’Brien said. “We compete hard and we play a position where only one of us can play at a time. Having two starting quarterbacks  is a good/bad problem to have, I guess,  but we’ve gotten along well on and off the field. Long after I’m through playing football Reid and I will still be friends.”

Academically, O’ Brien is taking courses in sports communication at Catawba. His career goal is to become a coach.

In 2013, another quarterback with the last name of O’Brien, Danny, transferred to Catawba after stints at Maryland and Wisconsin, and did a lot to rescue that season. He’s now playing in the CFL with Edmonton.

Maybe the new O’Brien will be remembered one day as fondly as Danny is.

O’Brien’s winning touchdown pass to Keyon West, who made a great catch, at FCS foe VMI on Saturday created a lot of excitement and momentum for Catawba football. The Indians (2-0) will try to sustain it against a quality D-II opponent on Saturday. A win might put Catawba in the national top 25.

“There has been some trash talk, but it’s all been friendly,” O’Brien said. “Everyone is looking forward to the game.”