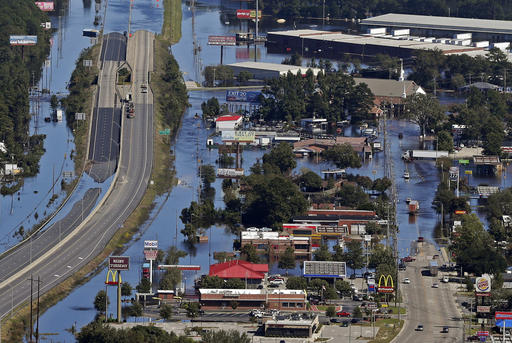 Nearly a year after floodwaters from Hurricane Matthew covered southeastern North Caroline, including Interstate 95 and homes and businesses in Lumberton, above, many homeowners and businesses are still waiting for help. Between $450 million and $500 million in unfunded recovery needs remain, according to state officials. Associated Press

RALEIGH — While the nation focuses on Hurricane Irma and Hurricane Harvey, North Carolina still doesn’t have the money it needs to rebuild from Hurricane Matthew.

Yes, it’s been nearly a year since widespread flooding hit the eastern part of our state. Yes, federal and state politicians have touted multiple rounds of recovery funding. But after 11 months, many homeowners and businesses are still waiting for help to get life back to normal.

Fair Bluff Mayor Billy Hammond, whose small town along the South Carolina line was underwater for days, told me the latest timeline for aid money is “after the first of the year.” Residents, he said, are “getting a little bit upset, but I tried to tell them that’s the way the government works and my hands are tied.”

The delays are unacceptable. For the money that’s already allocated, government agencies just need to write the damn checks. Fair Bluff has been promised funding for a new apartment complex to make up for storm-damaged housing, and construction should be under way. It’s not.

And the storm victims who have been promised help are the lucky ones. Thousands of people have been told that even though they meet the qualifications, there’s not enough state and federal money to assist them.

Gov. Roy Cooper’s point guy on Matthew recovery, Dempsey Benton, says the state still has between $450 million and $500 million in unfunded recovery needs. That includes nearly 2,000 people who want the government to buy out their flood-prone homes and about 10,000 people who need help repairing damaged homes. “We hope that gap will be becoming less as we work to secure other resources,” he said.

Benton says the Small Business Adminstration has only provided $31 million in loans in North Carolina. In Fair Bluff, only three of about 18 active downtown storefronts have reopened since the storm, Hammond said.

In past storms, North Carolina has leaned heavily on the Federal Emergency Management Agency, or FEMA, to handle the majority of recovery needs. FEMA isn’t providing enough support for Matthew, and a few more months of asking likely won’t open a magical treasure chest full of money.

State leaders, this is your problem now. Harvey and Irma are going to stretch FEMA’s resources thin, even with an infusion of cash from Congress. Already, some federal grants from Matthew are being put on hold. FEMA is delaying a $760,000 grant to help rebuild a pier on Oak Island and it’s now unclear when — or if — the money will arrive, The State Port Pilot of Southport reported.

North Carolina will now have to compete with more recent storm victims for limited federal resources. And there’s no way that Fair Bluff, Princeville and Kinston have anywhere near the political clout that Houston and Miami have.

The legislature will likely need to find the roughly $500 million to help homeowners still struggling from Matthew. So far, the legislature has chipped in $200 million in December and $100 million in the budget it approved in June. To put the need into perspective, $500 million is about 2 percent of the state’s $23 billion annual budget.

But the good news is that Republican leaders have amassed a large “rainy day” fund of nearly $2 billion. They’ve been reluctant to spend much of it, but if Matthew’s flooding doesn’t qualify as a “rainy day,” I’m not sure what does.