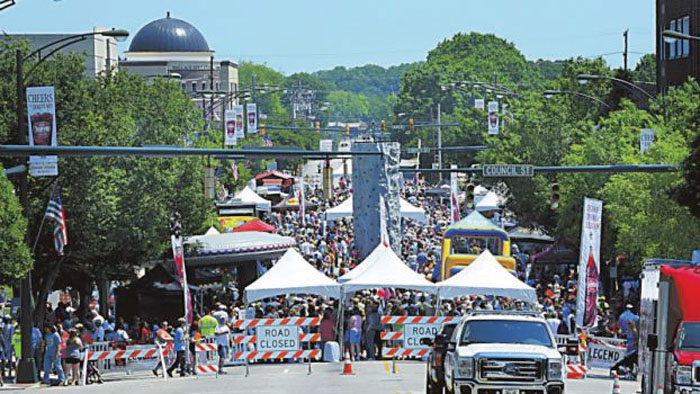 The Cheerwine Centennial last spring is the kind of special event that can bring thousands of people downtown.

SALISBURY – Special events like parades and festivals are one of the things that make Salisbury vibrant, Police Chief Jerry Stokes said.

But “everything costs money,” he added, including putting on community gatherings.

For the past three decades, he said, event organizers have had fairly relaxed guidelines from the city.

“That doesn’t work for us now because the events are larger. They require mobilization of a lot of city resources,” Stokes said. “We’re talking about policemen to block a street to do a road race. We talk about at the end of a race, people usually have food, and that means that you’ve got to have a trashcan. You’ve got to have port-a-potties. Just lots of things that people I don’t think quite recognize go into holding a special event.”

The city’s current ordinance, which was adopted in 1980, has gaps that allow organizers to give the Police Department three days’ notice before an event and paying off-duty officers “under the table” rather than paying them through the city.

Stokes said not paying officers through the city could be hazardous for his staff. That’s because if an officer were to be injured while covering an event and he was not being paid by the city, he would not be eligible for workers’ compensation.

“We want our officers to have that coverage,” said City Councilman Brian Miller during an Aug. 29 meeting about the ordinance. “So we want everything to go through the Police Department.”

Miller, along with Councilman David Post, has been working on a City Council special committee for the past 10 months trying to update the three-decade-old ordinance in a way that will best utilize city resources while also not putting too large a burden on event organizers.

“The point is we’re here to solve for the common good. … What we’re trying to find is a compromise,” Miller said during the meeting.

Event organizers like David Freeze, president of the Salisbury-Rowan Runners Club, have been concerned about some of the proposed changes to the ordinance, including the idea of having to pay each officer a set city rate.

Freeze said that if the city charges $30 per hour and requires a certain number of officers per hundreds of people, the 11 5K races that he hosts annually in Salisbury could lose a good portion of their profits.

“And these are, at least my events, nonprofit events. Every single one of them,” Freeze said.

The balance between adequately compensating officers and helping nonprofit groups maximize their donations has been one of the biggest sticking points as the committee has tried to update the ordinance, said David Post.

It’s a difficult question of what deserves money most, he said.

“If you need to take dollars away from (fundraisers for) homelessness, cancer … what do you decide to take money from in order to fund the city?” Post said.

What other cities do

Even cities and towns that are similar in size to Salisbury handle special events differently.

Kannapolis city spokeswoman Annette Privette Keller said that until three years ago, the city had “no good process” for organizing special events.

But as requests continued to increase, the city staff decided to set up a special events committee to help “streamline” the process, Keller said.

The committee has a representative from each city department, which Keller said prevents residents from having to go to multiple departments to plan one event.

The Parks and Recreation Department is in charge of the committee.

“We have 300 events per year, on average. So not having a process was killing us from a staffing (and) personnel costs perspective,” Keller said. “So I think this helps us all.”

Statesville also has its Parks and Recreation Department in charge of special event services, according to department Director Brent Cornelison.

“That way, there’s one way in and one way out, and we don’t have people asking 10 things to 10 people in 10 places,” Cornelison said.

He said most of the city’s largest events are co-sponsored by the city and are run by organizations that the city has been working with for years. Co-sponsored event organizers are not required to pay for officers or to have a certain number of officers based on attendance.

“The ones (the City Council) co-sponsors, there’s already a relationship. We’re going to look at, ‘What’s the benefit to the city?’” Cornelison said.

He said that in 2009, the Statesville City Council had to ask a similar question about how much money should go to the city versus area nonprofit groups.

“5Ks had gotten real big a few years ago. There were basically two per weekend. The big thing was time consumption and officers. So we proposed a $2-per-person road race fee,” Cornelison said.

He said the proposal was met with some opposition and that, in the end, the council decided not to implement it. But he said that part of the community was for it.

“All of the money was going to go back to a greenway development fund,” Cornelison said. “Those, though, with nonprofits thought it would be taking money out of their pocket.”

Lt. Brian Vaughan of the Huntersville Police Department said that in almost all of Mecklenburg County, event organizers are charged $31 per hour per officer for a minimum of three hours.

“On top of that … if officers are out in traffic, we charge per hour for the car as well to offset long-term wear and tear of the vehicle,” Vaughan said.

Vaughan said that while Huntersville does not mandate a certain number of officers per event goer, it does require that one supervisor to be present for every four officers.

“It completely coincides with what the event is. We have a food truck event that attracts a thousand people, and we’ve only ever had two officers,” he said. “It’s never been an issue.”

The Aug. 29 meeting of the Salisbury City Council special committee was its last.

Brian Miller said that although the proposed updates to the ordinance are not perfect, they make the ordinance “far better than it was when we started.”

Freeze – who said he was the only resident to attend every special committee meeting – said he has faith that all the kinks will be worked out in time.

“I think I’m optimistic about it. City services in general have been very good for us over the years,” Freeze said. “I think that, if things do work out and the City Council does accept that proposal, I believe everybody will be happy in the long run.”

The proposed changes will likely be brought before the City Council in October.

Before the council votes, there will be time for residents to voice either their opinions on the changes.