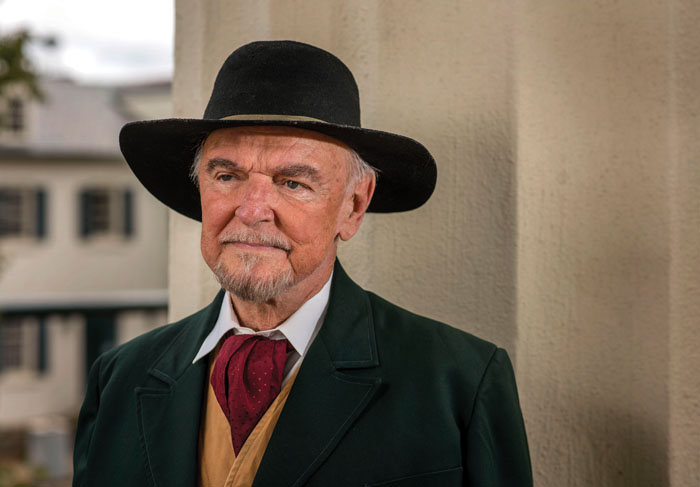 This coming Saturday, John Holshouser — the retired judge, attorney and FBI special agent — will call on his considerable theatrical talents and play the role of Buerbaum. You can catch him all day at Germanfest at the Old Stone House near Granite Quarry.

“I’ll try to make certain everybody has as much fun as I do,” Holshouser says.

Something to keep in mind: Holshouser’s resemblance to Buerbaum is striking, but more on that later.

The real Theo Buerbaum was a man of many talents — bookstore owner, newspaper publisher, business executive, a vestryman for St. Luke’s Episcopal Church, an “immigrant agent” for new German citizens, a Royal Arcanum member, a photographer and a custom framer.

He was one of the founders of Chestnut Hill Cemetery, where he is buried. He was a charter member of the Old Hickory Club and one of the organizers of the Rowan Historical Society. He was on the city’s first census committee.

And you might consider Buerbaum as Salisbury’s first librarian. At his bookstore in 1885, he established a circulating library of 5,000 books. You paid $2 to be a member. With a paid subscription to his newspaper, the North Carolina Herald (1885-89), a reader received a free book.

But Buerbaum’s lasting legacy was his photographs, many of which he sent to printers in Germany who would make them into postcards and send them back to Buerbaum’s bookstore for sale.

The Buerbaum photographs chronicled daily life — scenes such as people in wagons coming out of the mountains to sell apples, residents rocking on porches, men carrying a casket at a funeral or others having picnics by the river.

As the late 1800s gave way to the 20th century, Buerbaum also took picture after picture of Salisbury street scenes and individual buildings. His camera recorded much of the construction of the ill-fated Whitney Dam in Stanly County and the development of Livingstone College and Spencer Shops.

Sides personally owns 17 publications that include images of Buerbaum’s work. The important thing is that most of Buerbaum’s photographs have survived. Sides herself has published two postcard books, and each relies heavily on Buerbaum pictures.

When the city of Salisbury installed its first marker on the downtown History and Art Trail, the one chosen related to Buerbaum. It was placed in front of his bookstore location at 106 S. Main St., the home of today’s Salisbury Wine Shop.

Over the past month in getting ready for Germanfest, Holshouser has learned pretty much all of what he knows about Buerbaum from Sides. He is fascinated with a lot of the Buerbaum photographs he has seen, such as one showing the rooftops of downtown Salisbury from more than a century ago.

Holshouser says it’s wonderful to be able to locate the buildings that still exist.

Holshouser is impressed, too, by what kind of businessman Buerbaum must have been. “He was a real merchant,” Holshouser says.

In addition, Holshouser came to learn Buerbaum taught English to new German settlers, helped them establish homes and find jobs. “He was instrumental in helping them become naturalized,” Holshouser said.

From his research, it became evident to Holshouser that Buerbaum was religious, patriotic and “very enthusiastic about Salisbury.”

The Buerbaum family lived in at house at 414 S. Main St. that remains standing.

Holshouser’s own German roots in Rowan County go back to 1724 and Andrew Holshouser.

But why was Holshouser chosen as the man to play Buerbaum this Saturday at the Rowan Museum-sponsored Germanfest?

Give Randy Lassiter the credit. Lassister has been the enthusiastic person in charge of this year’s Germanfest, and he has left no stone for the Old Stone House event unturned.

Lassiter noticed the resemblance of Buerbaum to Holshouser, who serves on the Rowan Museum board. At a board meeting, Lassister told fellow members one of his ideas for Germanfest was to have someone play the role of Theo Buerbaum — and he knew the perfect person.

Meanwhile, he made sure a photograph of Buerbaum was being circulated among board members. By the time the photo reached chairwoman Betty Mickle and finally Holshouser, they all knew who Lassister had in mind.

Holshouser couldn’t refuse, and he recited one of his favorite German phrases as confirmation he would do it. Clyde, the local artist, has helped Holshouser come up with a hat, tie and several other suggestions for his Buerbaum attire.

His frock coat is courtesy of Eastern Costume Co. “I think I’m in uniform,” Holshouser says.

Holshouser promises he will stay in character all day at Germanfest, and he intends to use his best guttural German accent in talking with folks.

“I think I will just enjoy seeing everybody at Germanfest,” he says, then breaks into his Buerbaum voice. “If it happens there’s a beer for sale, I will get a beer for sale.”