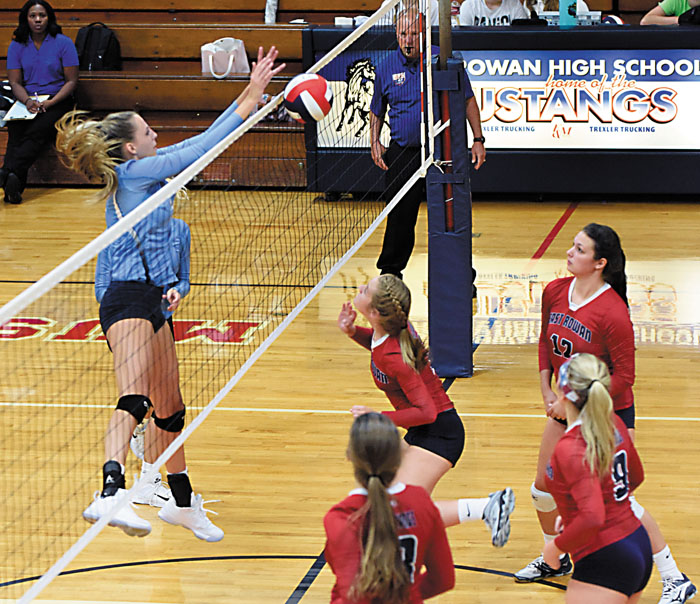 East battled, but the taller, longer — and still undefeated — Falcons overpowered the home team, 25-13, 25-12 and 25-13 in Tuesday’s North Piedmont Conference opener for both teams.

“We had a pretty good team last year,” Hester said. “But we’ve put in a lot of work since then. We’ve all gotten better.”

While it’s basically the same bunch of West girls who were excited about squeaking out the program’s first winning season  in a decade in 2016, they do look different. More confident, more aggressive, more everything.

“All our hitters are really athletic,” Link said. “But the biggest differences from last year are our volleyball knowledge and our chemistry. We know what we’re doing — and we know each other.”

West coach Jan Dowling has been around a while. She  coached many good teams at South Rowan and sent a lot of players to college programs. She’s elevated West’s program pretty quickly.

“We’ve got a group of girls who want to change this program, and they’re working hard at it six months a year instead of three months, and that makes all the difference,” Dowling said. “This is my third year at West, but this is the first time we’ve had everyone on the team on the same page, everyone rooting for each other whether they’re playing a lot or not. It’s pretty simple. It’s just playing as a team. If you play as a team, if you have that great group effort, it works.”

It’s working for West, which has a really special player in sophomore outside hitter Hester, a sometimes dominant player in 6-foot senior middle hitter Faust, a smart junior setter in Link, and a junior libero, Hannah Pratt, who isn’t flashy, but scrapes a lot of balls off the hardwood.

“They’ve got some height, they’ve got some experience, and they’ve got some players,” impressed East coach Sandy Lytton said. “We didn’t expect it to be just the Tori Hester Show, and it certainly wasn’t. Tori is really good, but West can go to a lot of people. As a team, they do a lot of good things.”

After taking the first set, West never gave the Mustangs a chance in the second one, breezing out to an 8-1 lead. East got back as close as 13-8, but Link set up Hewitt for a kill and then scored herself on a dink. With West leading 19-11, Hester put away three straight kills, Link racked up an ace, and Hester finished a sensational flurry with a block.

Gusler got West going with two quick kills in the third set, and Faust became a major factor.

“She really came on and manned the net,” Dowling said. “When she plays well, she’s a spark plug for the whole team.”

East’s last chance to make comeback in the third set came after Paige Butler and Caroline Johnson combined for the block that whittled what had been a six-point West lead down to 12-9. But West answered with a kill by Faust, a point by Lindsey VonCanon, a kill by Gusler and nice digs by Rachel Campbell, who jumped off the bench, and it was all over.

“We came together well and played hard, but we needed to talk more and communicate better,” said East’s dynamic junior libero Baleigh Hill, who had 26 digs. “West is just really consistent with their hitting, and consistency is something every team can use.”
East (4-6, 0-1 NPC) was led in kills by Leah Wyrick (six) and Olivia Wright (five). Wright attacked all day, whether things were going well or badly for the Mustangs.

“We’ve got a young team and we’re still figuring things out,”  Wright said. “But we’re learning and we’ll keep working.”

West was ranked 27th in the state by MaxPreps going into the match. Next week, the Falcons take on three teams ranked in the top 11 — No. 2 Davie, No. 4 North Iredell and No. 11 Carson. So the Falcons will find out if they’re good, great, or somewhere in between.

Dowling is making no predictions, but she firmly believes her team is capable of a breakthrough season.

“We beat awesome teams from North and South Carolina and won a gold-bracket championship at camp,” Dowling said. “These girls have been working for months, working hard just about every day at conditioning or weight lifting or volleyball. They’ve done everything I’ve asked them to do.”