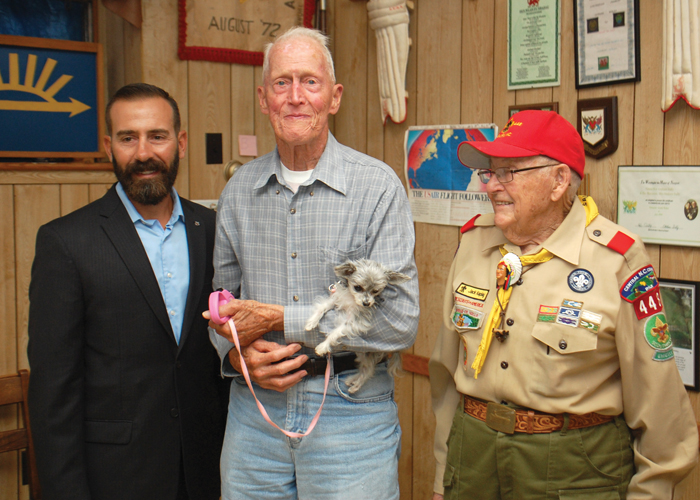 Rink has been affiliated with the troop for 65 years, and Assistant Scoutmaster Mark Eagle said “dedicated” best describes the man Rink has been to the troop and community at large.

Rink worked for 50 years at the Salisbury Post, starting out as a paper boy and eventually becoming the newspaper’s longtime business manager. He has been a member of the Salisbury Lions Club for 55 years.

“And in reference to the Scout Oath — ‘to do my duty to God and my country’ — John served Coburn United Methodist Church as trustee chairman for at least 30 years and served our country in the U.S. Navy,” Eagle said.

Rink joined 41 others in receiving benchmark service-pin recognitions from Troop 448 on Saturday during its 85th anniversary program.

Scoutmaster Alfred Wilson, the main force behind construction of the brick and granite sign marking the Rink activity area, also provided a hollow space to include a time capsule with items provided by Scouts and leaders.

The Rev. John Cook, pastor of the Presbyterian Church on the campus of the University of South Carolina, served as the anniversary program’s guest speaker. Cook joined Cub Pack 448 at the Webelos rank before advancing to Troop 448 in 1981. He went on to earn his Eagle Scout award in 1984 and serve two years as senior patrol leader.

Also, Randy Chandler spoke during the program on behalf of his son Justin.

Justin Chandler, who attended West Rowan High School, earned his Eagle Scout with Troop 448 in 1998. He went on to graduate from the Air Force Academy, was trained in piloting C-130s and was deployed three times.

Justin Chandler later trained on the KC10 aircraft and was employed in support of Operation Enduring Freedom.

Today, after graduating from the Air Command and Staff College, Justin is a student in the School of Advanced Air and Space Studies at the Pentagon.

Over his 65 years connected to Troop 448, Rink served a large chunk of that time as the troop’s treasurer.

“When I was a Boy Scout,” Eagle said, “John made sure we didn’t spend all our money on candy or fireworks.”

Eagle said Rink’s love and devotion to his family and extended family of Scouts are well known. “I have been on the receiving end and claim John as one of my other dads,” Eagle said.

One meaning of “dedication” is “to address or inscribe to someone or something as a sign of honor or affection,” Eagle told the dedication crowd Saturday.

“To you, John Rink, for your years of service and dedication — and most important, your love for so many — we dedicate this John Rink Scout Activity Area in your honor,” Eagle said.

Rink was on hand for the dedication and the rest of the anniversary program that followed.

Wilson said the time capsule includes things such as his letter to future Scouts of Troop 448; programs from 60-, 70- and 80-year anniversary programs; a Troop 448 neckerchief; a vial of pure honey that already is 50 years old; a rock from Linville Gorge that was picked up during the first backpacking trip there in 1970; action photographs supplied by today’s Scouts;  a copy of the Salisbury Post; a copy of Salisbury the Magazine; an edition of the newspaper’s TimeOut section; a flash drive with troop pictures and information; and a photo of everyone at the dedication.

The magazine issue going into the time capsule includes a story on Troop 448 Scoutmaster Emeritus Jack Kepley, who has been associated with the troop for 80 years.

Cook remembered his first summer stay at Camp Barnhardt as a homesick 12-year-old when Kepley was his Scoutmaster. At Barnhardt, located in Stanly County, Cook went repelling for the first time.

“If you had the courage to get to the top,” Cook said, “Jack made sure you stayed there. I was going to repel down no matter what.”

After that camp, Cook was never homesick again, and he recalled many of the hiking, camping, skiing and service trips the troop went on, such as helping in the cleanup after a tornado hit the town of Red Springs.

There were other Scout trips for Cook — to New York City, Tidewater, Virginia, the Yorktown battleship in Charleston, South Carolina, and the National Jamboree in 1985.

What he enjoyed most, Cook said, was being with his friends in Scouts and growing up together.

The Central N.C. Council named Cook its Outstanding Senior Patrol Leader in 1985, the same year he received the Leadership Award and was chosen to present the council’s annual report to the N.C. governor.

Cook was president of the student body at Salisbury High School. He graduated from Davidson College and went on to conduct Western tours for youth and worked as a back-country guide for the National Parks Service for several years.

He attended seminary at Emory University in Atlanta.

“I owe a debt of gratitude to Troop 448,” Cook said. One of the things Scouts taught him, Cook said, was to look each day for a way to help someone else — to look beyond self to be of service.

Leaders with the troop, such as Kepley, taught him how to do things the right way and be a leader himself, Cook added. “The greatest lessons I learned from Troop 448 were about leadership,” Cook said.

Since the troop was founded, it has had 139 Eagle Scouts and more than 700 boys have participated in the program.