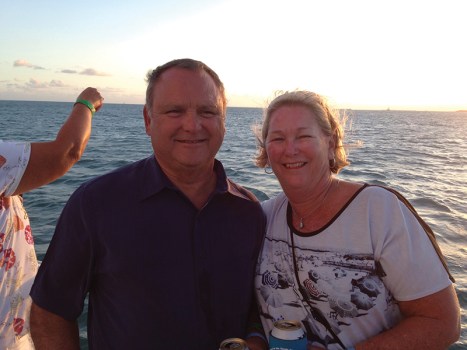 Submitted photo - Alex Dandison, left, and Phyllis Dandison, right pose for a picture. Alex and Phyllis recently took a trip to Saint Martin, an island in the Carribean. During their vacation, Hurricane Irma struck the island. 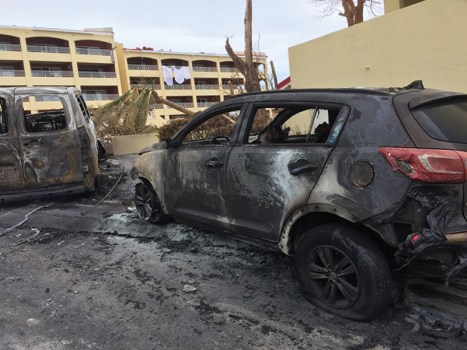 Submitted photo - A burned car on the streets of Saint Martin, an island in the Carribean, following Hurricane Irma. Salisbury natives Alex and Phyllis Dandison recently traveled to the island and hunkered down in their hotel bathroom during the storm. 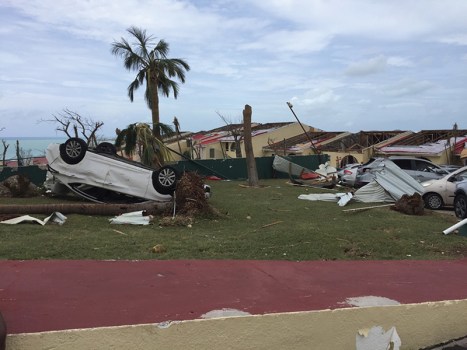 Submitted photo - Cars sit flipped over and building lost roofs after Hurricane Irma struck the Carribean island of Saint Martin. Salisbury natives Alex and Phyllis Dandison were on vacation when the storm struck. 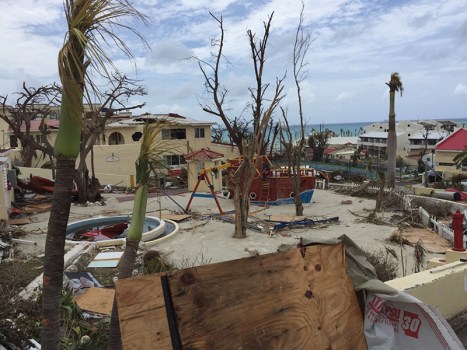 Submitted photo - Hurricane Irma devastated the Carribean island of Saint Martin. Salisbury natives Alex and Phyllis Dandison, who took this photo, were on vacation on the island when the storm struck.

Alex and his wife, Phyllis, were finally headed home.

Three days after the hurricane struck the Caribbean island of St. Martin as a Category 5 storm, the Dandisons evacuated on a military plane, leaving a harrowing experience behind.

Bringing only small carry-on bags, the couple — originally from Salisbury and now living in Greensboro — flew Saturday from St. Martin to Puerto Rico aboard a Kentucky Air National Guard C-130. For the first time in days, they showered and ate a full meal.

One day later, they were in Atlanta. On Monday, after a vacation that turned into a nightmare, the couple arrived back in Greensboro.

“It’s definitely not going to be something we ever forget,” said Phyllis.

Ready for vacation, the Dandisons and three of their friends arrived in Saint Martin on Sept. 2. Joining the Salisbury natives were Randy and Joyce Love of Charlotte and Harriett Grady of Charleston, South Carolina.

When they arrived, the weather was beautiful and so was the island, Alex said.

The group knew about Hurricane Irma. Weather forecasts, Alex said, seemed to show some possibility for the storm to turn north before reaching St. Martin.

“We knew Irma was there and that we were taking a chance, but we were hoping for the best,” Alex said.

The group decided to follow through with the trip, in part, because they had already booked it.

The National Weather Service showed the storm positioned in the middle of the Atlantic Ocean on Sept. 2. The storm had formed days earlier, quickly reaching hurricane strength.

Also on Sept. 2, Weather Service forecasts showed the storm at Category 2 strength, with sustained winds at 110 mph. Hurricane Irma’s five-day forecast placed St. Martin in the area sometimes referred to as a “cone of uncertainty” — an area that could be affected by the storm.

As Irma moved closer to the Caribbean, the storm’s path began to focus on St. Martin. Forecasts showed the storm would strike Wednesday.

The friends had three days — Sunday, Monday and Tuesday — to enjoy their vacation before the powerful storm pounded the small Caribbean island.

‘The whole building was shaking’

Packing winds of 185 mph, the storm struck on the day weather forecasters predicted.

To survive Hurricane Irma, the group of five placed their bags behind a Murphy bed, one that folds into a wall. They put the bed’s mattress in the bathroom, where the group gathered to ride out the storm.

For hours, they sat mostly silent in the bathroom. Phyllis said the group occasionally talked but spent most of their time praying.

“We were just praying that it would all be over with,” she said.

When the storm reached its full intensity, Alex and Phyllis said the building, made of concrete, began to shake and rumble.

“The noises were just horrifying,” she said. “We didn’t know what was going on. We heard things crash and bang and we were just in this small space.”

Alex compared the feeling to sitting in a vibrating chair.

“It was a harrowing few hours,” he said. “When we were sitting in that bathroom, the whole building was shaking like a vibrating chair you might find in a mall.”

The group received a temporary reprieve as Irma’s eye passed overhead, calming the storm considerably. Alex said the group walked outside for about 30 minutes. They saw a glimpse of the damage that would follow the storm.

‘I was holding that knife up so people could see it’

Hurricane Irma ripped part of the roof — the side closest to the ocean — off the group’s vacation condominium. Drywall, insulation and other building materials were strewn about the condo. Everything was wet, Alex said. Cars were damaged or flipped over. Alex recalled seeing a row of cars on fire. A number of glass doors were broken. The storm stripped trees of their limbs and leaves.

With destruction surrounding them, the group of friends tried to survive until they could find a way to leave the island. They traveled to stores that opened sporadically to buy food and drinks.

“It was just a type of situation where you had to get what you can when you can,” he said.

Alex recalled being asked by one member of the group to bring back a few liters of water, but there was no water. It was soda or nothing, he said. Food began to run out, too.

To flush the toilet, Alex and Phyllis said they used pool water.

“There were a few days of just miserable life situations,” he said.

But scarce food and water were not the only issues facing the group. Alex and Phyllis said they began to hear reports of stealing and looting.

“When we began to hear about the looters beating up residents, I had a big butcher knife and I gave my friend Randy a knife. They were the biggest two butcher knives in that drawer,” Alex said. “I was holding that knife up so people could see it.”

He said the women in the group asked him to put the knife away, but he sat on the condominium’s veranda with the knife to show any potential looters “that they were in for a fight.”

Adding to the stress of their situation, Alex and Phyllis said they didn’t have a way to tell family members they were alive.

After a few torturous days, the group heard that Americans would being evacuated from the island.

On Saturday, Alex and Phyllis recalled grabbing their bags and running to the lobby to catch a bus to the airport. The couple left some of their belongings, including clothing, behind and doubt they’ll ever see them again.

“If we do, it would be a miracle, and we’ve used up a bunch of miracles,” he said.

Like thousands of other people, they were at the airport early Saturday morning.

The airport had extensive damage from the storm, the couple said. Broken glass prevented outbound passengers from stepping into the terminal. Instead, the thousands who gathered Saturday at the airport waited outside and boarded planes from the tarmac.

Only military airplanes evacuated people. There were no commercial airlines operating immediately after the hurricane, Alex said.

Upon arrival, Alex said he informed officials at the airport that he has asthma and diabetes. He said those health conditions led to him and his wife being evacuated sooner than they expected. Their friends left roughly two hours later and met the couple in Puerto Rico, he said.

Before Alex and Phyllis boarded the plane, however, they got one more taste of tropical weather. Hurricane Jose, still lingering in the Atlantic Ocean, briefly brushed St. Martin. The second hurricane dumped torrential rainfall and whipped up winds.

On Sunday, the group scored four seats on a Delta flight headed to Atlanta. Alex bragged that the service on the flight was top-notch. There were free drinks, free coffee and free access to TV.

With only four seats available, Harriett Grady of Charleston opted to stay behind in Puerto Rico. On Monday, Phyllis said Grady is OK and plans to return home soon.

The other four rented a car to drive from Atlanta to Greensboro. It was cheaper than a flight, Alex said.

Finally, Alex and Phyllis arrived at their Greensboro home at 2:30 a.m. Monday.

Alex cracked open a cold beer, and Phyllis responded to a number of messages from family and friends. For about an hour, Phyllis estimated, they enjoyed the comforts of home before going to sleep.

“Right now, I’m feeling great,” Phyllis said Monday afternoon. “All that matters is that we got home safe and most of our friends are home.”