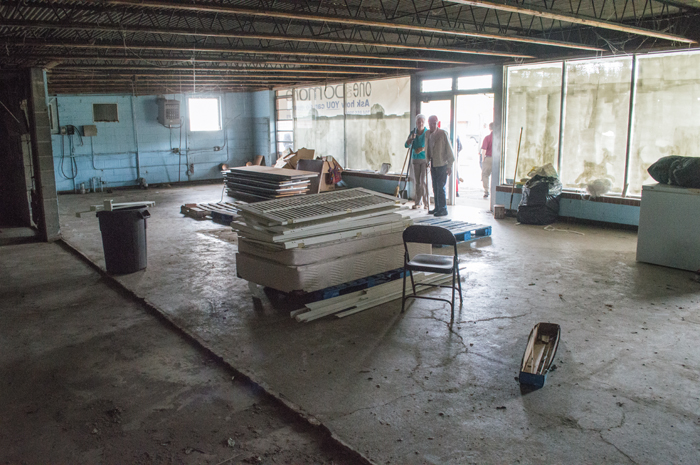 Attendees of the Main Street Mission food pantry groundbreaking ceremony in September step inside the building that will soon be renovated. Once complete, the building will hold a food pantry, food co-op, storage space and some clothing distribution. Josh Bergeron/Salisbury Post

CHINA GROVE —  Main Street Mission on Sunday marked the start of a major expansion with a groundbreaking ceremony for the start of construction on a food pantry.

The nonprofit plans to remodel and expand a vacant laundromat building adjacent to its current facility on South Main Street in China Grove. Inside the building will be a food pantry, interview stations and ample storage space. The existing building measures about 1,600 square feet. As part of the renovation, Main Street Mission will add 1,200 square feet.

Sunday’s ceremony drew a crowd to the former laundromat. Some were board members, volunteers or employees for the nonprofit. Others, such as Dawn Miller, had received services from Main Street Mission.

Speaking during the ceremony, Miller told her story. A mother of four, she was once a nationally-certified human resources manager living a comfortable life. Then, Miller said, she made some bad choices.

“You go from being whole and being able to support everybody to, now, at a place where you’re coming to the mission,” she said.

She used a starfish as an example of how she lost parts of herself to poor life choices. A starfish is able to regrow lost arms or limbs, she said.

“When we come to the mission, we’re coming with those limbs missing. We’re missing a bunch of those resources,” She said. “In my case, I think I had three resources left and, thankfully, Jesus is my anchor. I had Jesus left, but I had almost nothing else.”

Once complete, the renovation and expansion will allow the nonprofit to move many of its services into the new building and dedicate its current space to resource classes, support groups and a program called Bridge Out of Poverty.

Frank Mano, who manages the nonprofit’s food pantry, said the extra storage space will be especially valuable for when Main Street Mission receives pallets of food. Currently, the nonprofit’s workers and volunteers have to unload the food piece-by-piece from the pallets.

“The space is really what we need,” he said.

Construction on the former laundromat should start in about two weeks, said Main Street Mission Director Anne Corriher. Architects on the project are Pete Bogle of the Bogle Firm and Natalie Morgan of Morgan Architecture. By mid-to-late spring, Corriher said the organization would occupy the new building.

“To think about the opportunities we have ahead of us in the near future are just overwhelming,” she said.

Hope Oliphant, the nonprofit’s outreach director, also spoke after the ceremony about her excitement.

“I think the most exciting part is that we think we know the vision, but God probably has a bigger vision than what we can even imagine,” Oliphant said. “To watch it unfold from here is going to be wonderful.”

Although they’ll soon start on construction, Main Street Mission is still fundraising for the project. The nonprofit held the groundbreaking after raising just shy of $300,000 — a self-selected goal to hold the ceremony. Their campaign, however, aims to raise a total of $400,000.