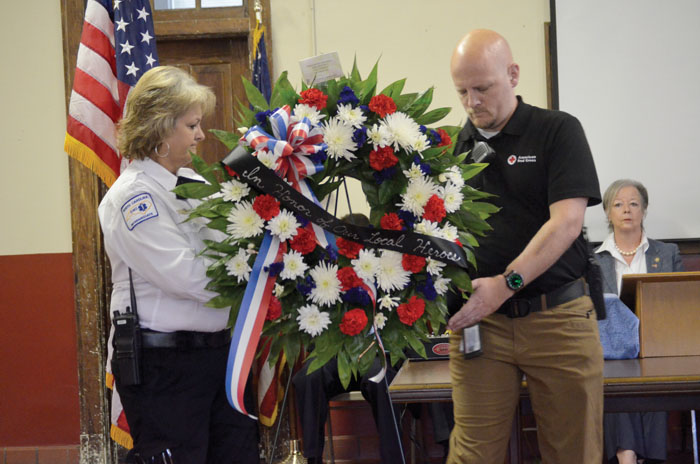 SALISBURY — Tim Lackey retired from firefighting in 1997 as a battalion chief with the Salisbury Fire Department. He recalls vividly where he was when he first heard about the Sept. 11, 2001, terrorist attacks.

Lackey was shopping at the farmers market in Lexington when he happened to stop at the booth of a vendor who had a radio. Lackey wasn’t sure of the details initially, but he knew it was bad.

He sped home to turn on the television and saw on nearly every station news accounts of what was happening.

Lackey, who served as a firefighter for 27 years and is also an Air Force veteran, worked alongside current Salisbury Fire Chief Bob Parnell.

“It’s not just an occupation; becoming a firefighter is what you do. When the bell rings, you go,” Lackey said.

He said just like in the military, soldiers are trained to take care of their fellow man.

On Monday morning, Lackey was at Salisbury Fire Station No. 5, which is beside the Salisbury-Rowan Firefighter’s Memorial, where a Sept. 11 memorial service was held. The station was filled with emergency responders, law enforcement officers, local residents and community leaders.

She said most everyone runs from danger.

“But we are surrounded this morning by brave men and women who run toward danger, every day of their lives. We remember to give them the honor they deserve, and thanks,” Blackwell said.

She said her son just retired from the Marine Corps after 22 years in counterintelligence. He worked in Iraq, Afghanistan and 20 other countries.

“He hates being thanked for his service. He says he was just doing his job,” Blackwell said. “Our firefighters and police officers are a humble lot, too. They’re just doing their jobs. But it’s an enormous job, one that causes you to face danger every day. You are why we remember.”

“Today is a day that we set aside each year to remember the events and victims of that day and to honor those heroes that so willingly gave their lives in the line of duty,” Edds said.

“And yet, while we stand 16 years and 583 miles from the events of that historic day, we are reminded that our own firefighters, our own police officers, our own first responders, and our own brave military members possess the same strong character, the same bravery, and the same strong commitment to serve and protect as those who died on that clear New York morning in September of 2001,” Edds said.

He said there are no adequate words to express appreciation to those local heroes.

“You have our sincerest thanks, our highest admiration, and our constant prayers that God will protect you as you protect us, that he will prosper you, that he will give you good health and that after each call, he will return you safely to us and to your families,” he said.

Even in the midst of current storms, emergency responders are willing to risk their own lives to help others, said Salisbury Police Chief Jerry Stokes.

John Myers, who was a New Jersey firefighter during the attacks and responded with his station, said he still can’t bring himself to talk about what he saw that day.

The retired firefighter is with the Dogs of Fire Motorcycle Club Crossroads Crew, which is made up mostly of fire and emergency services personnel.

“It’s kind of hard. This day brings back a lot of memories,” Myers said.

He finds it difficult to explain that day to his young children but hopes he does a sufficient job. He said he only wishes more were done in the schools on the anniversary to honor the victims and responders.

He appreciates that the community never forgets to take a few moments to honor those who died on 9/11 and those responders who didn’t hesitate to help.

After the attacks, Myers drove trucks across the country. No matter where he was, he never missed a Sept. 11 memorial service.

Chief Parnell said it’s important to continue to have the ceremony locally to remember the sacrifices made. He said it doesn’t matter how far Salisbury is from New York and Washington because first responders are all brothers and sisters.

“It’s a huge network of firefighters,” he said.