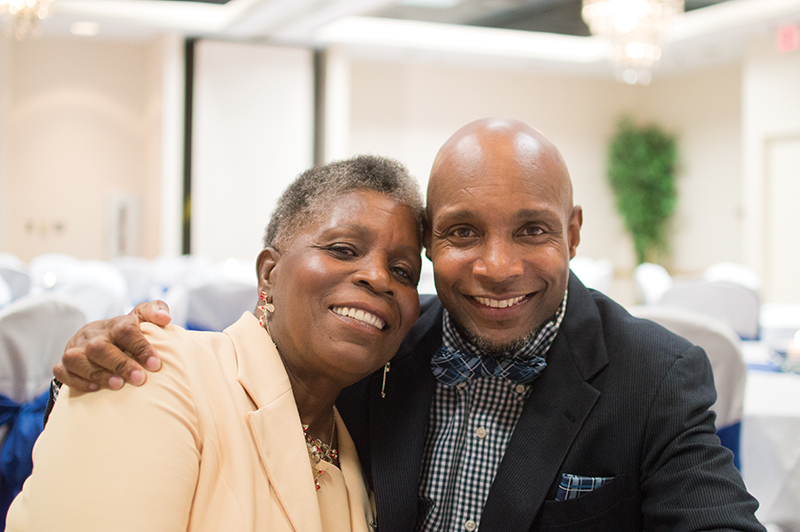 Josh Bergeron / Salisbury Post - Alex Clark, right, and his mother Magaret Clark-Robinson pose for a picture on Saturday evening during a fundraising event. Clark hopes to raise $50,000 to help with stem cell treatment.

Clark, 47, recently announced to his friends, family and acquaintances that he has been diagnosed with ALS or amyotrophic lateral sclerosis. He also began a fundraising campaign, including a dinner held on Saturday, to pay for stem cell treatment. The total is short of the $50,000 donation goal, but that hasn’t battered his spirit.

Byrd also founded Gemstones Academy, which is a partner agency to Clark’s COMPASS group. Even with the ALS diagnosis, Clark still works and uses his criminal history as a cautionary tale for local young men.

It was Clark that kept his mother Margaret Clark-Robinson strong after she learned about the diagnosis.

“He gave me the strength I needed,” Clark-Robinson said. “He’s been a trouper.”

Clark-Robinson was one of the many family members, friends and acquaintances who gathered Saturday evening for a fundraising dinner at the Livingstone College of Hospitality Management and Culinary Arts on Jake Alexander Boulevard.

In attendance were elected officials such as City Councilman Kenny Hardin and County Commissioners Chairman Greg Edds. Some of Clark’s oldest friends were also in attendance. Stanley Bailey joked that he knew Clark during the days when he embraced the nickname “cutie on duty.” Clark once purchased a license plate with the phrase on it.

“We’ve known each other through the good and the bad,” Bailey said.

Clark, born in 1970, has lived most of his life in China Grove or Salisbury. He graduated from South Rowan High School. In the mid-1990s, he was convicted of a federal drug charge and served 18 years in prison. When speaking to young men, he often talks about his criminal past and urges them to maximize their potential by discovering their gifts, talents and abilities.

Since announcing his diagnosis on Facebook in August, Clark said he’s been overwhelmed by the support.

“There’s been a lot of, actually, people who you don’t think are watching what you do,” Clark said. “There’s been inboxes, texts and calls. … To me, the beauty has been that it’s people from all walks of life and color sending their support.”

Before Saturday’s dinner, Clark’s fundraiser had generated $1,540 of the $50,000 goal. Byrd said a single stem cell treatment would cost $28,000 and it’s possible that Clark will need a second treatment. He’s hoping to raise enough money to schedule a November date for his treatment.

Clark said he will also use money generated by working and selling his book “The Four Queens” to pay for his treatment.

“I’m going to be grinding as hard as everyone else,” he said.

Clark said he has life insurance and health insurance through the Affordable Care Act, but neither will pay for ALS treatment.

He said medicine available will only prolong his life for three months. Stem cell treatment, he said, could pause or potentially reverse ALS.

In bid for second term, Berry places a focus…