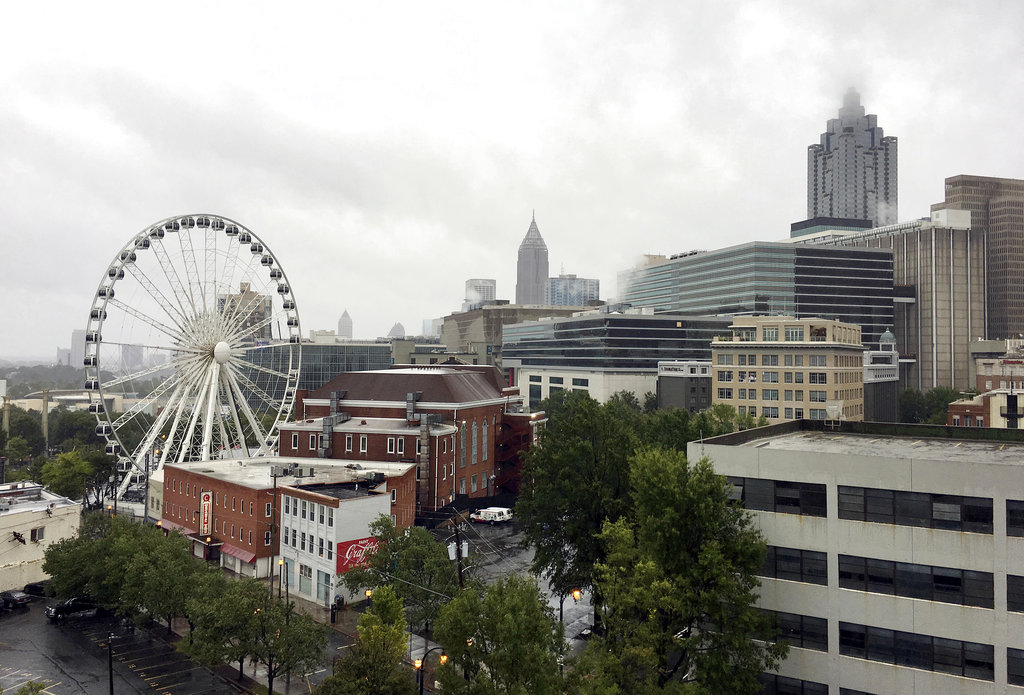 The Atlanta skyline is seen Monday, Sept. 11, 2017. More than 250 miles inland from the Atlantic Ocean or Gulf of Mexico — was under a tropical storm warning for the first time today. Forecasters said the metro area could expect peak winds of 40 mph (65 kph) and gusts up to 55 mph (90 kph) on Monday as Hurricane Irma's remnants moved across the southeastern United States. (AP Photo/Alex Sanz)

ATLANTA (AP) — The nation’s busiest airport canceled about 800 flights Monday as a weakened Irma moved from Florida into Georgia, where the governor had declared an emergency a day earlier for the entire state.
The city of Savannah, on Georgia’s coast, was evacuated for the second time in less than a year because of the impending storm, and the National Weather Service in Peachtree City confirmed that Atlanta — more than 250 miles (400 kilometers) inland from either the Atlantic or Gulf coasts — was under a tropical storm warning for the first time.
Spokesman Andrew Gobeil said Hartsfield-Jackson Atlanta International Airport would remain operational Monday and would continue to monitor storm conditions with the help of the Federal Aviation Administration.
By early Monday, around 450,000 Georgia Power and EMC customers mostly in coastal and south Georgia were without power after Irma crossed over into the state overnight, bringing high winds and rain.
Thousands of evacuees from Florida have swarmed into Atlanta for shelter as they fled Irma in recent days.
Couple Felicia Clark and Johnny Thompson along with their two dogs, Gracie and Roscoe, evacuated from Florida’s gulf coast and have been staying in a downtown Atlanta hotel since Sunday. While walking his dog in nearby Centennial Olympic Park, Thompson encountered a couple dozen of other evacuated Florida residents who in the same predicament as them.
With memories of the gridlock on Interstate 75 fresh on his mind, Thompson said they are considering heading back home Monday despite prediction of heavy rain and strong winds expected to run through south Georgia.
“I would rather drive through the middle of it today than sit in traffic with everyone else returning to Florida tomorrow,” Thompson said.
Many Georgians have been preparing for the storm. But when Samantha Ramirez began stocking up for Hurricane Irma’s approach toward Georgia, she ran into problems finding bottled water.
After hearing about Atlanta’s tropical storm warning Sunday, Ramirez rushed to grocery stores only to find that three locations didn’t have any water. Her struggle to find water made her realize the threat from Irma.
“I didn’t think it was going to be this bad,” said Ramirez, 32, who works in downtown Atlanta but lives in Hiram, some 20 miles (32 kilometers) to the north. “I noticed that my neighbors just went to the gas station and they brought back a bunch of containers. They are stocking up with gasoline. It seems like people are starting to get more frightened.”
Ramirez planned to work from home Monday, staying with her 10-year-old son whose school, like many others, in metro Atlanta from K-12 were closed. Colleges including the University of Georgia and Georgia State also canceled classes.
Georgia Tech officials said the campus would remain open with limited operations, and would monitor the storm’s progress.
Metropolitan Atlanta Rapid Transit Authority suspended all bus and rail services Monday. Officials will continue to coordinate with state and local officials along with emergency personnel to determine MARTA’s service schedule for Tuesday, spokesman Erik Burton said.
Georgia Power spokeswoman Holly Crawford said Monday the areas with the most power outages were Glynn and Chatham counties. She says the utility company had about 3,400 employees on standby to respond.
Crawford said Georgia Power expects widespread damage caused by high winds and fallen trees. The utility company said it must wait until conditions are safe for damage assessment teams to enter the field and begin the restoration process followed by repair crews, which could take several days.
Southeast Georgia could get from 4 to 8 inches (10 to 20 centimeters) of rain, with isolated areas seeing between 8 and 12 inches (20 to 30 centimeters), according to weather service meteorologist James Carpenter. He said sustained winds have reached 45 mph (72 kph) and gusts over 60 mph (96 kph) in the coastal area causing a number of knocked down tree and powerlines.
Much of eastern Alabama and coastal South Carolina also were under tropical storm warnings as Irma pummeled Florida, weakening on its march northward.
Forecasters said metro Atlanta could expect peak winds of 40 mph (65 kph) and gusts up to 55 mph (90 kph) on Monday as a result of Irma’s remnants.
Atlanta Mayor Kasim Reed said Sunday that strong winds tore tile and debris off the facade of a 32-story building on a downtown Atlanta street, forcing some road closures.
Reed warned the power lines and trees could fall as winds grow stronger. He urged residents to store trash cans and outside furniture and equipment in their homes.
“Don’t be fooled that this storm cannot hurt you. Don’t go out and play in it,” he said. “We urge everyone to stay indoors and stay safe.”