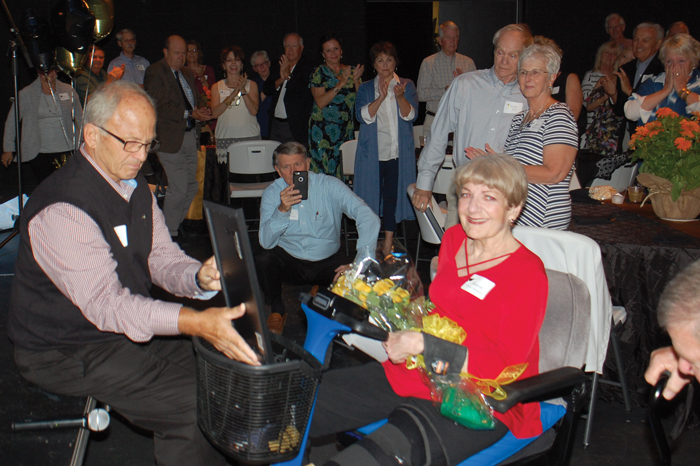 SALISBURY — Sharon Wagoner Whittington is just one of those people. She’s the friend with the smile and the laugh. She’s the person worried about you, not herself. She stays in touch, when no one else does.

Whittington’s classmates at Boyden High School — they graduated in 1967 — have been knowing this about Whittington for more than half a century. It was Whittington through all the decades who kept track of people and organized their many reunions.

Before the days of social media, that task was a lot harder, but somehow Whittington tracked you down, often through parents, siblings and friends. And she did it while not always feeling great herself.

Franco Goodman called her the “kingpin” behind their reunions. Eric Norris described her as the “ramrod.”  John Brincefield said she was  the “glue” and “the driving force.”

Brincefield laughed, remembering how he was elected by classmates at graduation as their everlasting president. “But Sharon has done the bulk of the work,” he said. “She’s meant a lot to us. She really is strong.”

Which brings us to this past weekend and the 50th reunion of the Boyden High School Class of 1967. It was the first, because of health reasons, Sharon Whittington sat on the sidelines and didn’t play a role in organizing.

A committee of about a dozen people, led by Ed Rusher, stepped in instead. It took a village. But Whittington’s classmates could not let the weekend pass without finding a way to honor her — and surprise her at the same time.

The first order of business at Saturday evening’s reunion at Lee Street Theater was to call  Sharon forward. “I just turned around,” Whittington protested, noting she had just gotten her motorized chair situated at the table.

But she moved forward anyway, and Brincefield read aloud a class proclamation in her honor, essentially naming her as class president emeritus.

The proclamation listed the obvious things evident to anyone who knows Whittington — how she was the heart and soul of the class for the past 50 years, how she lived a life of courage and gratitude while always helping others and how she was “an exemplary student, wife, mother and community leader that all graduates of Boyden High School would be proud to emulate.”

As Brincefield presented her with a framed proclamation, Whittington and the rest of the room became emotional. Sharon said she was touched beyond words.

“All of you are so dear to me,” she said. “… I’m grateful to all of you for staying in touch with me and loving me. I’m overwhelmed.”

Goodman came forward and reminded everyone how Whittington’s passion has always been finding ways to give back. The reunion committee learned from husband Jay Whittington that one of Sharon’s biggest causes through the years has been Meals on Wheels.

So behind the scenes, the class began its own fund-raising campaign for the organization.

“The response has been amazing,” committee member Norris said.

A total of 55 classmates contributed before the reunion Saturday — even from some people who could not attend — and more money kept coming in over the weekend.

Whatever money was raised was matched by an anonymous donor in the class.

Goodman announced to Whittington and everyone else Saturday night that they had raised $8,000 to be given to Meals on Wheels in Sharon’s name.

There more more gasps and tears.

Samantha Dagenhart, a Food Lion employee and member of the Meals on Wheels board of directors, was on hand Saturday night to hear the good news. She expressed her appreciation to the class and her gratitude and admiration for Whittington, who has been an ardent supporter of Meals on Wheels for more than 30 years.

Add “catalyst” to the descriptions given for Whittington Saturday evening.

“She was the catalyst for all of us to make this happen,” Goodman said. “She just loved this class from the day we graduated.”

As tuned into things as she always has been, Whittington said she suspected something was up Saturday. “I knew something might be going on … but this is unbelievable.”

Whittington emphasized she had absolutely nothing to with planning the 50th reunion.

“And this one was the best,” she said.