Finding the truth, one man finally grows up 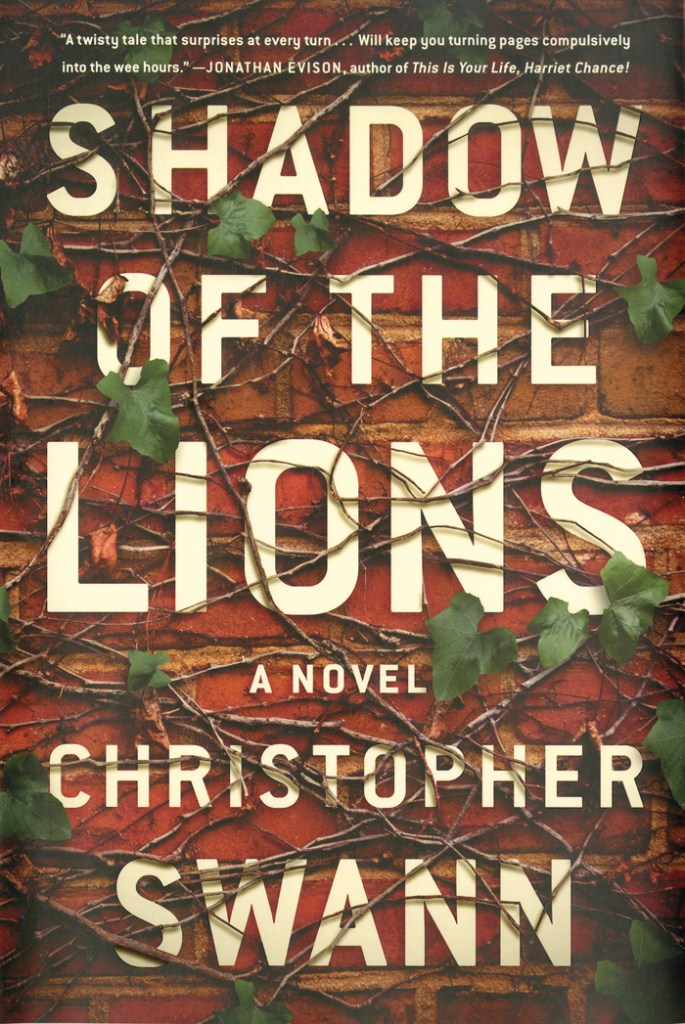 “Shadow of the Lions” sounds a bit grandiose, but the lions at the entrance to a boy’s boarding school in Virginia have seen plenty.

Author Christopher Swann, chair of the English department at Holy Innocents’ Episcopal School in Atlanta, has plenty of background to draw upon in this mystery/thriller about lost boys, lost ambition and lost dreams.

Matthias Glass, a young apparently failed novelist, goes back to his alma mater to teach English when a second novel does not materialize.

He drives a Porsche, his one sign of brief success, but he has a miserably failed relationship to forget, he’s estranged from his family and he is looking for a future. The invitation to teach is not entirely welcome, but it does pay a living wage.

Matthias is haunted by the memory of his former roommate, Fritz Davenport, who ran into the woods one day and was never seen again. He blames himself because he lied to Fritz about cheating on a test and chastised him for worrying about getting into college.

Matthias is rather self-centered, as he was as a teen-ager. He has yet to realize, in his late 20s, that the world does not revolve around him.

The decade of blame he shouldered for Fritz’s disappearance is misplaced, but without it, we wouldn’t have this book.

Because he can’t let go of Fritz, Matthias begins his own investigation into his disappearance. Along the way, a new tragedy rocks Blackburne and a new heap of blame is dropped on Matthias.

The school’s response to the tragedy means staff blood must be shed, and it happens quickly.

When Matthias uncovers hints that something’s rotten on campus, a desparate administrator picks him as the scapegoat and culprit, so Matthias is hit with indignity, shame, anger, dishonor, all the things you can imagine could happen to a teacher in such a closed situation.

At Blackburne, they protect their own first, and to hell with the outside world, especially staff members who have tarnished reputations.

Ren Middleton, the associate headmaster at Blackburn, knows the truth, but he doesn’t like Matthias or any of the new teachers and slams down an iron fist of discipline. He is determined someone will pay and it will not be the administration.

Matthias is struggling, trying to do his version of the right thing, which is not Ren’s version. He’s never been able to grow up, stuck in his teen angst by Fritz’s vanishing act.

He may not be able to write, but Matthias is curious, and he notices things around the school. He picks up on conversations, relationships and missing pieces to what should be straightforward stories.

Pairing with a retired deputy, Lester Briggs, who helped investigate Fritz’s disappearance, Matthias plunges forward as if he is a character in a novel, getting himself into places he should never be, uncovering more dark secrets from the past and how that has extended into the present in an ever-widening circle of deceit.

When he and Briggs discover Fritz’s connection to skullduggery in Washington, D.C., they open a new and even more disturbing wound that explains a great deal. Why were the FBI called off Fritz’s case? What did his father’s lucrative defense contracts have to do with it?

There are several blind alleys, but Matthias begins to see the threads coming together.

He finds out the bad kid didn’t just stay bad, he got angry and is lining his pockets while exacting revenge.

Someone on campus is dealing drugs — more than just casual marijuana. And that someone really doesn’t care who he hurts.

Matthias nearly gets himself killed for going relentlessly forward and not thinking about the consequences. He loses his job, is arrested, has to sneak around campus to continue his investigation.

As many red herrings as Matthias could chase, he gets an off-handed tip that takes him away from Blackburne and into a totally different world.

What he finds there will further shock and sadden him, but it also changes his focus. It’s not about what HE did; it’s not about tests or colleges or any of the things Matthias has been beating himself up about.

It’s deeper, gut-wrenching, and the consequences are rippling out like a bomb blast.

Swann may stretch our disbelief here, but the story will keep you turning pages. When Matthias ends up relying of former schoolmates to help him out, he also learns to respect them for who they are. The closed atmosphere of a boys’ school is ripe for mysteries and secrets. It’s a free-flowing well for many writers.

Matthias loses a lot in this book, but he gains self-respect, and the knowledge that there are no easy answers.