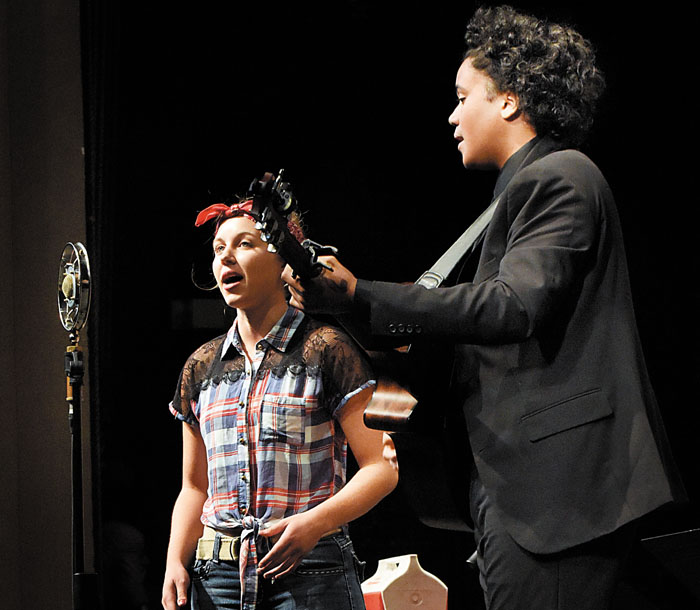 In April, ESU will present a concert by Eli Yacinthe and Sarah Claire King, who were a hit at the recent 'Bury Home Companion program. Photo by Wayne Hinshaw, for the Salisbury Post

Later this month, the Salisbury branch of the English-Speaking Union begins a new year of programming — presentations members hope will not only be fascinating, but will draw new members as well.

The club’s mission is to celebrate English as a shared language to foster global understanding and good will by providing educational and cultural opportunities for students, educators, and members.

This mission might encompass a wide variety of programs — and that’s exactly what Jill Connery has done in her role as speaker chair. Even though she is English, Connery points out that the club is not just for people of English descent.

“I thought it would be a wonderful way to meet local people,” says Connery, who moved to Trinity Oaks Retirement Community 5½ years ago with her husband, Jack. “We wanted to be part of the community.”

Connery notes that Toni Iossi served as speaker chair for five years before President Gerry Wood asked Connery to give it a try. Since Connery was a new member, she asked Mary James and Jim Taylor to help her out, which they did. They shared ideas with one another and offered feedback, Connery says.

“We knew that the way to attract new members was to offer high-quality speakers,” she says.

The help of Jim Williford, speaker chair of the Sandhills chapter of ESU, was also invaluable, she notes. He provided Connery with his own list of speakers, and she started making phone calls.

She also praises Wood’s leadership. “He’s been so supportive and easy to work with.”

Wood, the semi-retired owner of Gerry Wood Honda, has led the club for the past decade. The late Mary Messenger asked him to get involved — and nobody ever said no to her.

The English-Speaking Union of the United States was formed in 1920 to forge close ties with Great Britain following World War I. Wood notes that the local club first opened its bank account at F&M Bank in 1933. Wood, who was born in Liverpool and raised in North Wales, assumed duties as president because he wanted the local chapter to continue.

“We have a very informal, non-structured association,” he says. “We have brought in some very good speakers.”

The group has about 100 members, and has a monthly attendance of between 45 and 80, Wood says. The highest attended program came when Tom Staats, who’s retired from  Highland House, brought in Paul Burrell, Princess Diana’s butler, when he was in High Point to help introduce the Royal Manner line.

Wood has also presented to the club about his experiences as a Royal Naval cadet.

If you’ve never been to an ESU meeting, Wood issues an open invitation.

“I hope people come away having been entertained and learning something they didn’t know,” he says. “I want them to have a really enjoyable evening, and a desire to return for the next meeting. We have so much to offer in the way of cerebral stimulation.”