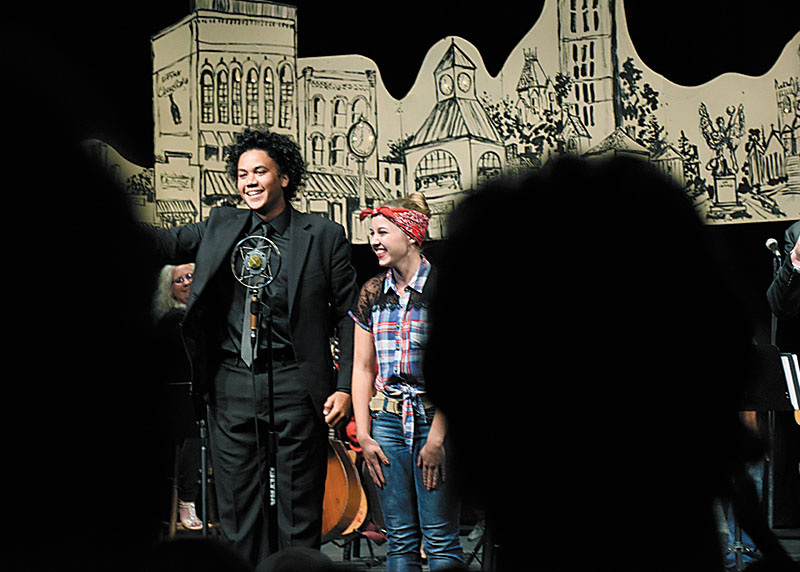 Wayne Hinshaw / for the Salisbury Post Sarah Claire King and Eli Yacinthe receive a standing ovation after singing in the ‘A Bury Home Companion’ show on Aug. 26.

Eli Yacinthe and Sarah Claire King were in the right place at the right time Aug. 26. The young musicians brought down the house during “A ’Bury Home Companion.”

Patterned after “A Prairie Home Companion,” the Salisbury Symphony fundraiser featured a variety of musical acts, and Eli and Sarah Claire, both from Statesville, were the first act to perform.

“These two set the stage perfectly for a dynamic evening of music,” says James Harvey, the symphony’s executive director. “After they left the stage, audience members were on the edge of their seats and ready for more. We certainly hope to be hearing more from Eli and Sarah Claire.”

As a matter of fact, James says, the symphony is working to produce a concert featuring them in 2018.

“I want the Salisbury Symphony to be a champion of high-quality music in the broadest sense, especially when it helps develop the careers of our young, talented artists,” James says.

Eli and Sarah Claire had sung for three years together with Kay Peeler — the show’s music director — in the chorus at Statesville High School. Eli is a senior there this year, and Sarah Claire will enter UNCC as music major in January. They’ve been singing together for about a year, mainly at restaurants around Statesville.

“It’s nice to have the audience’s attention on you,” says Eli of their inaugural appearance in Salisbury.

“Sarah Claire is not only a singer but is also a concert pianist,” Kay says. “As a chorus student she was always on task — holding her section together, always on time, never  missing a concert, always open to any and all types of music.  She was sheer joy to teach and I’ve always seen her potential. Over time, I have seen Eli grow musically and emotionally. I know they are both ready for bigger and better things.”

In the beginning, they worked up a set list of 10 songs. Now, Sarah Claire says, “We have a lot of variety. We sing everything from folk and jazz to pop and rock — pretty much anything there is.”

Eli and Sarah Claire brought the Meroney audience to its feet with their performance of two songs, “Daddy Doesn’t Pray Anymore” and “From This Valley.”

“I had heard Sarah Claire a couple of times, and I knew she was a strong talent, but I had never heard Eli,” says Kent Bernhardt, who wrote the script for the evening. “Kay has a great ear for talent and material, so I knew they would be wonderful, but I had no idea how wonderful. I’ve never seen such a strong reaction from an audience.”

“I am so excited that I was able to share them with Salisbury,” Kay adds. “None of us had any idea how well received they would be.”

The duo recently had the chance to sing at the Grand Ole Opry through the Fine Arts Summer Academy in Nashville.

“It wasn’t as nerve wracking as I thought it would be,” Eli says. “It was exhilarating, and it was cool to be in a place where so many famous people have sung.”

“It was fun and a good experience,” Sarah Claire adds.

Eli and Sarah Claire found the crowd in Salisbury to be friendly and personable, and hope to sing more here.

“I love the downtown area,” says Eli, who passed out plenty of business cards.

He says they’re both looking at singing as a career. “I’m trying to figure out what I want to do with music and where I want to go with it. Figuring out the business aspect has been the hardest part for me.”

He says he’s in the process of looking for a manager in order to take a more professional approach to his singing.

Sarah Claire took piano lessons for 13 years, and Eli’s dad taught him to play guitar when Eli was 10. He later taught himself to play by watching YouTube videos.

Although Eli and Sarah Claire have both written original tunes, the lyrics have proven more elusive, they say.

But with Janie Kincaid on drums and Luke Barnette on bass, the two are in the process of forming a jazz quartet for the holidays. They hope to book Christmas dates soon.

“It’s going pretty well,” he says, “but I do get sidetracked sometimes.”

Learn more about these musicians at Eli Yacinthe Music and Sarah Claire King Music on facebook.