Coffey’s Automotive: A family business in every way 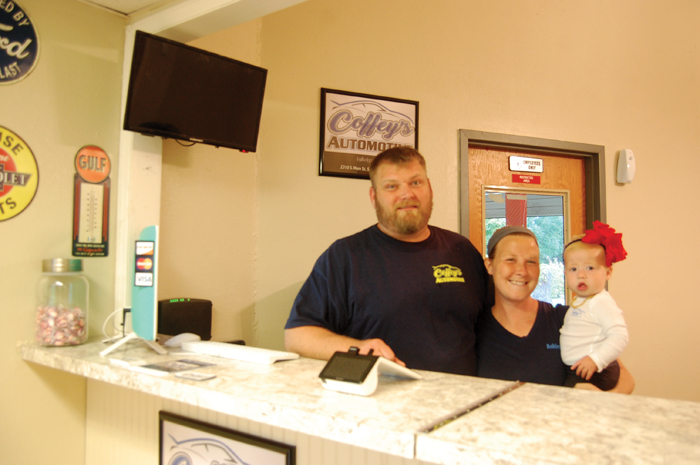 SALISBURY – As a father of five, K.C. Coffey knows a little bit about family.

So, when he opened his own automotive shop — located at 2310 S. Main St., near The Forum gym – he knew that he wanted it to have a family feel in every way.

“For some of your bigger work, going to a bigger dealership, (you spend) $1,000 where, if they had called me, it might be under $500. So I’m really trying to have honest and fair pricing, to drive customers in but (also) to get that family feel that I care,” Coffey said.

Coffey said that, although he’s been dreaming of owning his own automotive shop for years, he would call his purchase of the 2310 South Main property a “spur-of-the-moment” decision.

“I was in Michigan, just at a family reunion, and didn’t have any intentions of, in a week or two, having my own place,” Coffey said. “My intentions were actually to stay in Mooresville and take over ownership of that place. But the location and stuff, I couldn’t give up the opportunity here.”

Coffey worked at Auto Lube in Mooresville for 18 years. He left that job on Aug. 1, spent two weeks renovating his new property and then opened for business in Salisbury on Aug. 14.

“It had the two lifts, but everything else was pretty much gutted. So me and my father-in-law rebuilt the office. Everything you see here now is brand new,” Coffey said.

Coffey said that, before he and his father-in-law, Charles Shank, began work on the property, it was the “true definition of a grease monkey shop.”

Now, he said, it’s somewhere that he can bring his kids.

“I have five kids and we do a lot of sports and I do a lot of volunteer coaching. So you’ll see some sports stuff in my waiting room. Along with some of the older signage from me growing up in the automotive field,” he said.

Coffey grew up in Michigan, where his dad worked for General Motors.

After watching his dad for years, Coffey decided to take classes and learn about cars in his spare time. He said that, now more than ever, taking classes is an important part of being a mechanic because cars are “just like a big computer” now.

Coffey said that, at Auto Lube in Mooresville, his specialty was diagnosing problems with a car’s computerized mechanisms.

“If you’ve got a ‘check engine’ light, I’m the guy you want to see,” Coffey said.

Coffey moved with his wife, Ashley, to Salisbury eight years ago. Coffey said that, since then, he’s built up a reputation around town as a youth sports coach, since three of his boys play sports.

Now he said that he wants people to think of him when they need their annual state inspections done, as well as any general car repair work.

“You will not see me again for the same problem. A lot of customers will go somewhere for set of brakes and they’ll be back in a week because they’re making noise. I’ve never had that problem — I do everything right the first time,” Coffey said.

Coffey’s Automotive is open from 8 a.m. to 5 p.m. Monday through Friday.