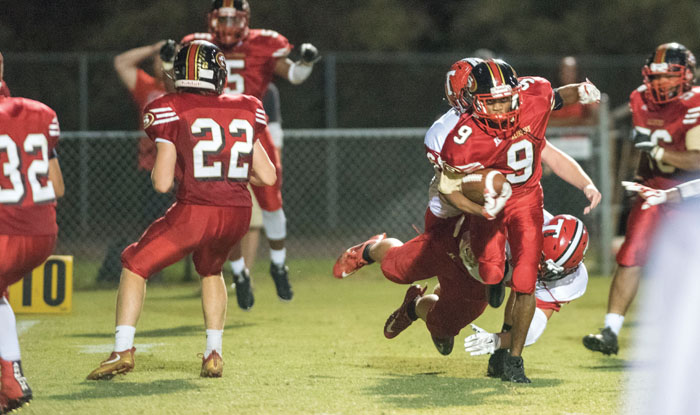 SALISBURY — Sometimes football is about skills, but sometimes it’s about wills.

Receiver/returner Tyrone Johnson, all 135 pounds of him, and Nick Austin, an inside linebacker coming back from a high ankle sprain, brought the will on Friday night at Ludwig Stadium and keyed Salisbury’s hard-nosed, 27-6 victory against old rival Thomasville.

Johnson made the game’s biggest play on a fearless punt return late in the first half. Austin tackled everything in sight from start to finish.

“Having Nick Austin back in there changed the dynamic of our whole defense, and our defense played pretty great all night,” said winning coach Brian Hinson, after the Hornets (2-1)  took their Central Carolina Conference opener. “But, offensively, if there was any way we could mess up in the first half, we messed up. It was frustrating.”

How frustrating was it? Salisbury’s first five possessions ended with Will Taylor punts.

But Salisbury’s defense, with sophomore Jabril Norman flying disruptively off the edge and Austin standing like a stone wall in the middle, wasn’t budging. Thomasville (0-3, 0-1) punted on six straight possessions in the first half. On that sixth punt, Johnson provided the turning point in a scoreless game.

The critical sequence started with a Taylor punt that landed just right and rolled and rolled to the Thomasville 15-yard-line. A penalty, one of many 5-yarders on the Thomasville offense, pushed the Bulldogs back to the 10. After Norman smashed a running play, Austin broke up a pass, and lineman John Pruitt wrecked a third-and-long run. With 1:34 left in the half, the Bulldogs were punting from their end zone, and the Hornets were clearly coming after it.

Thomasville’s punting game had been solid to that point, but this one was rushed, didn’t turn over and line-drived its way toward Johnson. The county champ in the 100 and 200 meters, Johnson caught the ball on the dead run, zipped straight ahead at first, then veered toward the far sideline with startling speed.

“I knew my blocking was going to be there, so I didn’t hesitate,” Johnson said. “Guys had my back. The only thing I was thinking about was trying to score.”

He did his best to do that. Finally cut off on the sideline, Johnson didn’t just fall down. He started working his way back across the field, bouncing off rough contact, dragging a tackler. Several Bulldogs finally yanked him down on the 2-yard line, as Ludwig Stadium erupted.

Two plays later, Salisbury scored. There were 42 seconds left in the half when Raheim Walker found the end zone.

“The hole was wide open, great blocks by Mike McLean, Tyrone Johnson and the line,” Walker said. “I saw the hole and hit it hard.”

The lead was only 6-0 at halftime after Salisbury failed on a 2-point conversion.

“I messed up,” Hinson said. “That was on me, and I know a 6-0 lead is scary. I told the guys at halftime that I hoped they could pick me up.”

Trell Baker, usually Salisbury’s biggest weapon, wasn’t injured, but he didn’t play in the first half for undisclosed reasons.

Baker did play in the second half. That changed a lot.

“Baker is one man, but he changes one whole side of the field because a safety has to help the corner on him,” Hinson said. “That opened some things up for us.”
Salisbury QB Griffin Myers became a bigger factor after the break. He had two nice option keeps for 15 yards early in the second half, and the Hornets got a drive going and pushed 65 yards for the score that made it 13-0. The key play was a pitch left by Myers to McLean. The freshman back vaulted through a wave of tacklers on a third-and-9 snap for 21 yards to the Thomasville 14. Then McLean got the TD on a short run to cap the drive.

Up 13 points and with the defense dominating, the Hornets were headed to victory. On Thomasville’s first possession of the second half, Austin made two stops and Norman made one, and the Bulldogs were punting again.

“We’d played a good first half, but the defense was determined to put four good quarters together tonight,” Austin said. “My ankle feels a little numb right now, but it held up fine. I was able to play the gaps hard and keep making physical tackles.”

With 6:25 remaining, Myers got the ball to Baker, and he promptly jetted 30 yards down the Salisbury sideline to score. Jack Fisher’s PAT made it 20-0.

Thomasville didn’t score until just 3:34 remained. That’s when QB Nicholas Bankhead connected on a 46-yard pass play with Carlos McNeair. That was Thomasville’s only completion of the night.

Thomasville tried an onside kick after the TD, but the ball trickled into the hands of Baker, of all people. He almost went all the way, cutting back twice and reaching the Thomasville 32.

Myers flipped  a bubble screen to Johnson on the next play. He took it 27 yards to the Thomasville 5.

“That bubble pass was  to reward Johnson because he blocked his tail off all night,” Hinson said. “People see this little, fast guy, but he’s also a tough bug.”

Johnson’s catch-and-run set up a short TD run by reserve back  Ray Mashore for the final TD.

“Even with all the first-half mistakes, it’s a pretty good win,” Hinson said. “Thomasville is good on defense.”

Luke Holland had a nice interception for the Hornets late in the contest. Cameron Gill had a pick erased by a penalty.