‘I love you, and you can’t do anything about it’: Community dedicates bench, greenway for William Peoples 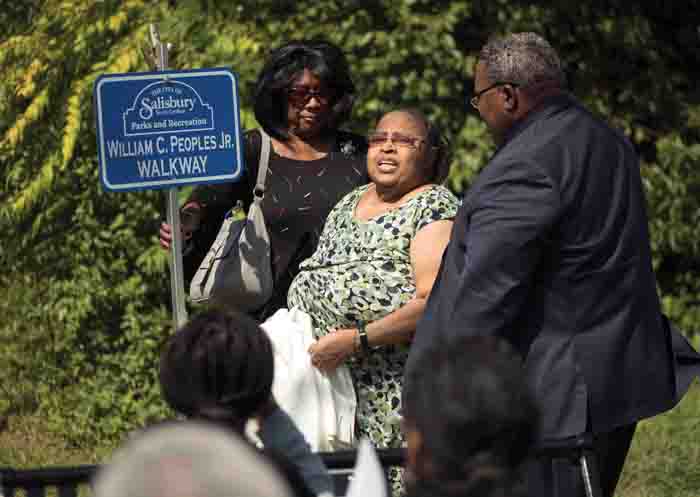 Maybe no one was ever more appropriately named than William C. Peoples Jr. When you get down to it, he was a man of the people.

“I love people who are passionate, and no one was ever more passionate than William Peoples,” former Salisbury Mayor Susan Kluttz said Friday of the late community advocate.

A memorial bench for Peoples was formally dedicated at the Dixonville Cemetery on Friday morning, as was the city greenway’s Brenner Avenue section, which will now be known as the William C. Peoples Jr. Walkway.

A brief ceremony was held at the cemetery before those attending hopped on a city trolley or rode in a van to the walkway to see newly posted signs. Peoples was a member of the Dixonville-Lincoln Memorial Project task force and lobbying for better housing, streetlights and sidewalks in the West End were among many of the causes he fought for during his life.

After the bench and walkway dedications, friends, family and city officials gathered in the fellowship hall at Peoples’ church, First Calvary Baptist, to pay tribute to him over lunch.

William’s sisters Sandra, Karen and Wanda were on hand, along with brother John. Brenda, another sister, was not able to attend.

DeeDee Wright, a longtime friend of Peoples, presented the family members with small replicas of the walkway signs now posted along Brenner Avenue. “William was truly my hero,” Wright said.

Peoples died in March at age 61. He could be described as opinionated and stubborn, to say the least, but he also was a man who deeply loved his family, church and city.

His pastor, the Rev. Leamon Brown, remembers William saying, “I love you, and you can’t do anything about it.”

John Peoples said when his brother felt something was right, “he stood by it come hell or high water.” William established a leadership role in his family, then took that into his neighborhood, church and city of Salisbury as a whole, John said.

A bench at McLaughlin’s Store near Livingstone College often served as William’s office.

Salisbury City Councilman Kenny Hardin cited many similarities he had noticed between the lives of Dr. Martin Luther King Jr. and William Peoples — among them their fights for justice, peace and righteousness and the courage to take tough stands.

During the ongoing struggle for civil rights, King had spoken of trying to reach the Promised Land and not having made it yet. “We’re going to get there, and we have a path to walk on now,” Hardin said referring to the dedicated section of greenway in Peoples’ name.

Peoples was a founding member of  Project SAFE, which was a community intervention program designed to provide help to first-time gun offenders. He also served on the Rowan County Department of Social Services board and was among the charter members with Barbara Perry of the Housing Advocacy Commission.

Perry said Peoples made members of the commission realize what was important, “because he loved the city,” and it will be important in the future for the housing advocacy group not to let him down.

Perry described how she and others knew from their first meetings and conversations that Peoples was a person who would have your back and stand with you.

“I am a better person for having known him,” Perry said.

Friend William Tugman said if something was going on in Salisbury, Peoples knew about it. And if you had a problem that maybe the city should address, you often could mention it to Peoples and he would try to find a solution, Tugman said.

Wright said her friend lived by several tenets, believing things such as nothing is ever permanent, living life with a purpose, fear doesn’t have to mean you’re stuck and the power to change your life is a choice a man makes.

“Salisbury has never had a better citizen,” said Kluttz, who described Peoples’ life as having “made a huge difference in who we are today.”

In bringing his issues to city officials, Kluttz said, Peoples never just complained, he “volunteered for everything” and always wanted to be a part of finding a solution. Kluttz noted his important work with Project SAFE, his service on an anti-gang task force and his overall concern about young people and their future.

Kluttz also recalled Peoples’ passion against a proposed closing of the city-operated Fred Evans swimming pool. It was one of her most emotional nights as mayor, Kluttz said, remembering the meeting about the pool in this same fellowship hall.

“There was never any talk again about a closing,” she added.

Kluttz had presented Peoples with the key to the city in 2011. He was a past president of the local NAACP and a onetime member of the Salisbury Human Relations Council. He received an Elizabeth Duncan Kloontz Humanitarian Award.

“There’s an absence and a void, because there are not more Williams that I see in my life,” Hardin said.

Dr. Bryant Norman, past president of the Salisbury-Rowan NAACP, recalled the state and national NAACP conventions he and Peoples attended and how Peoples wanted to sit in on as many break-out meetings at those gatherings as possible.

“He was very into it,” Norman said. “It all translated back to the local level.”

Peoples came to champion the goals of the NAACP with city officials, and he worked, among other things, to increase the hiring of minorities in city positions.

Mayor Karen Alexander was on hand to read a city resolution in Peoples’ honor on the dedication day. Beverly Hight and Gloria Jones sang powerful songs during the luncheon program.

Emily Perry, chairman of the Dixonville-Lincoln Memorial Project task force, recalled how Peoples encouraged her not to give up on seeing the project move forward.

The task force now has $200,000 in hand and hopes to be able to move into a Phase I development. The first phase will encompass a Dixonville Cemetery Memorial Walk along Old Concord Road, including patterned sidewalks, landscaping and street trees.

Broad steps will lead into the cemetery between granite monuments engraved with names of people buried on the grounds.

Previously, benches in the cemetery also have been dedicated to the late Fred Evans and Floyd A. Kerr III.

‘Remembrance of 9/11’ will be held Saturday at Price…