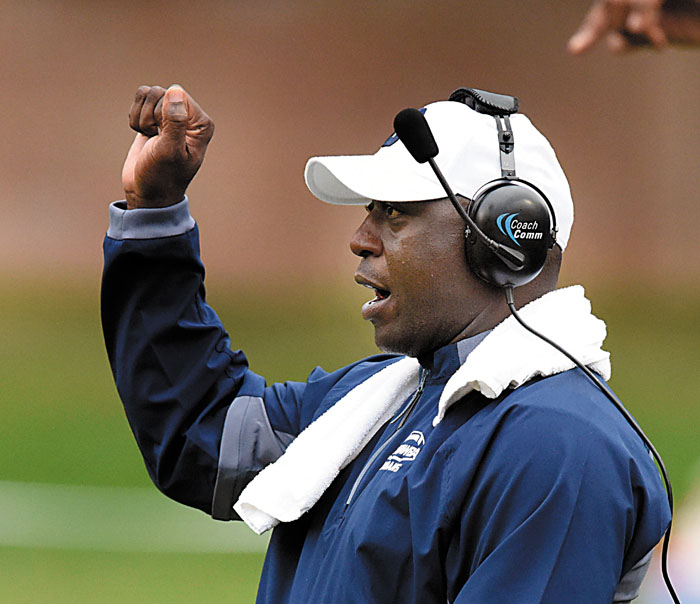 LEXINGTON, Va. — Safety Jeremy Addison’s interception sealed a 27-20 victory at VMI on Saturday afternoon, and Catawba’s football program celebrated its first win in 20 years over a Division I opponent that gives athletic scholarships.

Catawba rolled at Charleston Southern, 38-13, in 1997, when current head coach Curtis Walker was still coaching Catawba’s linebackers for David Bennett. Now Catawba has another win over a higher-level opponent to talk about.

“I don’t know how many people outside the program believed we would win, but I know the 100 people that made the trip — coaches, players, filmers, trainers, managers, everybody — believed we would,” Walker said. “We always say if we prepare well enough, we can beat our next opponent, no matter who it is. And we knew from film study that we could match up well with them athletically.”

Quarterback Patrick O’Brien’s decisive, 25-yard touchdown pass to an outstretched Keyon West with 42 seconds left  broke a 20-all tie and is the play that will be remembered.  O’Brien put the ball where only his receiver had a chance to get it, and West, a senior, made the play of his career. That pass came on third-and-9. If West hadn’t made the grab, Lee Brackman would’ve been called upon for a 42-yard field goal attempt.

“One heck of a catch by Keyon West  over his left shoulder because he’s looking for that ball over his right shoulder,”  Walker said. “He made the adjustment.”

Sam Mobley had eight catches for 211 yards for the Indians, the second-biggest receiving game in school history, trailing only Brandon Bunn’s 247-yard effort against Wingate in 2010. O’Brien came off the bench and threw for 261 yards, including 235 in the second half.

“It’s a great thing to have two quarterbacks,” Walker said. “Reid Carlton was banged up a little bit coming into the game,  battling a foot injury, but O’Brien came in and gave us a great spark.”

It’s not like VMI was awful. The Keydets had Austin Coulling, the first-string QB who was hurt in the Air Force game, back in action. He threw for 199 yards. VMI (0-2) was flagged for zero penalties and didn’t turn the ball over until Addison intercepted Coulling in the final seconds.

It’s not like Catawba was perfect. VMI had two easy, long TD jaunts when Catawba made mistakes.  Catawba also struggled mightily on offense in the first half. Catawba dug a 10-o halftime hole and was fortunate it wasn’t worse. VMI missed a 40-yard field goal late in the half.

“We made so many mistakes in the first half,” Walker said. “When we got to halftime, only down 10-0 and still very much in the game, we liked our chances.”

The turning point was delivered by linebacker Michael Peppers, a strong, seasoned veteran who’s usually out-accoladed by his fellow senior backers, All-American Kyle Kitchens and All-SAC first team pick Trey Evans.  VMI was driving early in the third quarter, looking to go up 17-0 when Peppers stoned VMI’s best back Daz Palmer for no gain on a fourth-and-1 at the Catawba 9.

That was one of seven tackles by Peppers. Kitchens and Evans also had seven each.

That vital stop energized Catawba’s offense. The Indians came to life, driving 91 yards, with two O’Brien to Mobley passes taking care of 78 of those 91. Eamon Smart (24 carries, 70 yards) bulled for the TD from the 1, and Catawba trailed 10-7.

Catawba had momentum. VMI went three-and-out. Then the Indians’ offense went back to work, using the ground game. Speedster Kenyatta Greene broke loose for a 26-yard TD. Brackman’s PAT failed, but the Indians led for the first time at 13-10.

O’Brien and Mobley were feeling it, and Catawba struck quickly.  Mobley’s 66-yard reception put the ball on the VMI 15. Then it was O’Brien-to-Mobley for 13 yards for a 20-13 lead with 10:08 remaining.

Catawba appeared to be in control, but then VMI got a sudden TD of its own, with three explosive plays in barely a minute. A 26-yard TD run by Quan Myers made it 20-all with 7:32 left.

“We had breakdowns,” Walker said. “But the offense was able to bail us out. We were outstanding on offense in the second half.”

Catawba’s decisive drive covered 65 yards and started with 3:21 remaining. O’Brien’s 26-yard completion to West was key. It moved the ball to the VMI 41.

“They were trying to do some things to take away Mobley, but that opened up West,” Walker said.

With 42 seconds left, Catawba took a shot at the end zone. O’Brien and West connected for the decisive six points.

Catawba’s defense still had to stop a desperate push by VMI in the final seconds. Kitchens knocked the ball loose on a sack, but VMI recovered and still had life.

But then Addison intercepted Coulling, and it was over.

“Lots of mistakes that we have to fix, but I’m proud of how are guys fought and I’m very excited that we won,” Walker said. “Our guys did a lot of great things in the second half.”

Catawba hasn’t started 2-0 since it beat West Liberty and Livingstone to start the 2013 season.

Next for Catawba is a trip to UNC Pembroke next Saturday for a 7 p.m. contest. O’Brien was UNCP’s starting QB in recent seasons.