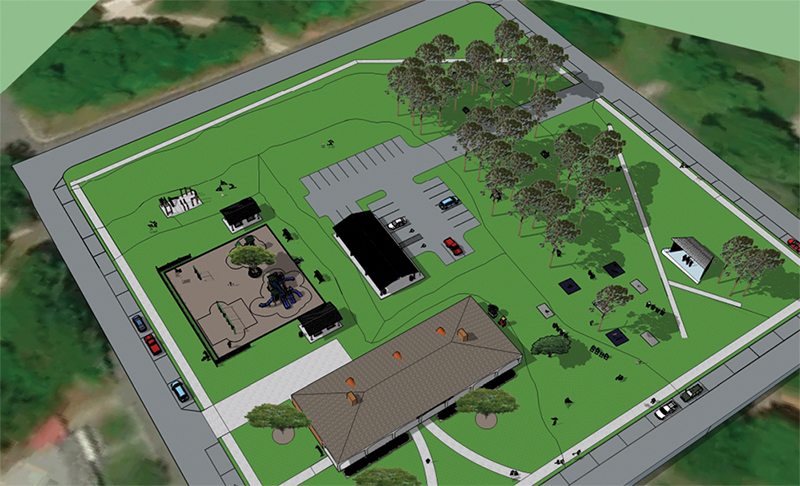 Emily Mabrito rendering - The China Grove Parks and Recreation Board on Tuesday presented a rendering of proposed renovations to the China Grove Community Building and surrounding greenspace. In response to the presentation, the town board appropriated $83,000 to the first phase of the renovations.

CHINA GROVE — The Town Council this week approved plans to add playground equipment and other amenities to a green space surrounding the community building on Myrtle Avenue.

Town Council members expressed excitement about the renovations, which could be complete by November.

Mabrito said the town’s parks board decided to focus on the China Grove Community Building and its surrounding park for improvements because it’s large and centrally located. A large number of China Grove residents would be able to walk from their homes to the park, she said.

“That entire block is a huge asset to the town,” she said.

During her presentation, she said the China Grove Community Building park could be a center of family activities and a location for community gatherings and venue for community events.

She said the playgrounds would have eight slides, two rock climbing stations, six total swings and a handicap ramp. A protective fence would be installed to prevent children from running into the road.

As presented during the town council meeting, the financial breakdown of phase one improvements is as follows: $60,000 for playground equipment, $11,000 for adult fitness equipment, $3,000 for bench swings and $9,000 for protective fencing.

Those improvements are in addition to the $100,000 allocated to the community building in China Grove’s 2017-2018 budget.

Other potential changes to the the areas surrounding China Grove’s Community Building include: two small picnic shelters, a large shelter with parking and a stage that could also be used as a venue for outdoor movies. Those changes were not funded in this week’s vote by the Town Council members, but Deal said the town would seek grant funding to pay for future phases of park improvements.

At one point during the meeting, Mayor Lee Withers pondered how the town might look once China Grove finishes renovations to park at the community building and another park desired on a 40-acre site on Patterson Street. Withers said the town could build a greenway to connect the two sites, which are within walking distance of one another.

A former landfill, the 40-acre site, however, is not as far along as the China Grove Community Building park.