Chiefs’ Berry out for season with ruptured Achilles’ tendon 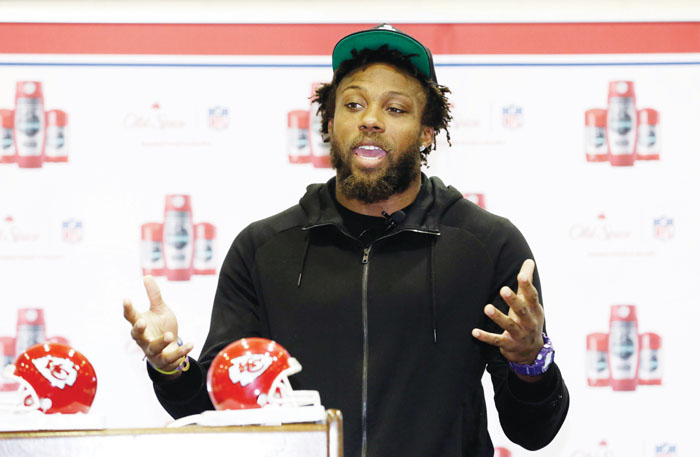 KANSAS CITY, Mo. (AP) — One of the biggest season-opening wins in Chiefs history came at the expense of their All-Pro safety.

Eric Berry ruptured his left Achilles tendon in the fourth quarter of Thursday night’s 42-27 victory over the Super Bowl champion New England Patriots, not only ending his season but leaving the Chiefs without one of the most visible and vocal leaders on their defense.

“You’re not going to replace Eric Berry with another Eric Berry. That’s not what happens,” said Chiefs coach Andy Reid, who confirmed the team’s initial fears in a conference call Friday. “But the guys know that Eric would be disappointed if they left off the accelerator at all. I think we’ll be OK there.”

Berry was hurt while covering Patriots tight end Rob Gronkowski on a passing route. He hobbled at the end of the play and promptly sat on the turf, where the team’s training staff began examining him. Berry did not appear to be in obvious discomfort, but it took a cart to remove him from the field.

The Chiefs have dealt with a rash of Achilles tendon injuries in recent years, including two sustained by Derrick Johnson. The star linebacker’s latest occurred late last season, but he managed to return to the field by summer workouts and was a full participant in training camp.

Berry also has a history of overcoming serious hurdles in his career.

Berry was coming off arguably his best year in 2016, when he made 77 tackles, picked off four passes and returned two for touchdowns. He almost single-handedly won a game in Atlanta, and was a big reason why the Chiefs went 12-4 and won their first AFC West title since 2010.

His performance while playing under the franchise tag earned him a $78 million, six-year contract this past offseason, making Berry the highest-paid safety in the league.

“I’m on a bit of a low right now,” Chiefs tight end Travis Kelce said. “I love him to death. He’s our fearless leader, and to see him go down in the first game breaks your heart.”

The Chiefs are deep at safety, though. Eric Murray played well after Berry left the game, while Daniel Sorenson — who fulfills multiple roles in the defense — could also play the position.

The game Thursday night also gives the Chiefs some extra time to assess options before playing their home opener against Philadelphia on Sept. 17. Reid said he expected new general manager Brett Veach to scour the waiver wire and inquire about safeties outside the organization as well.

“Brett’s keeping his eyes open for things right now. That’s what he does,” Reid said. “He’s always on top of that. We’re just kind of seeing the different options there.”

In the meantime, Reid said he expects Berry to continue to have a role on the team.

He broke down the defensive huddle even after leaving the game Thursday night, providing some energy for them when the outcome was still hanging in the balance, and Reid joked that Berry might get a head-start on a potential post-playing career by auditioning as an assistant coach.

“He had an opportunity to talk to the team last night after the game,” Reid said, “and I know he’d be very disappointed if anybody hung their head or let that be an issue. And I thought the guys handled it very well after Eric got hurt. Our guys were able to kind of muster it up and keep the emotional football part of it in focus there.”