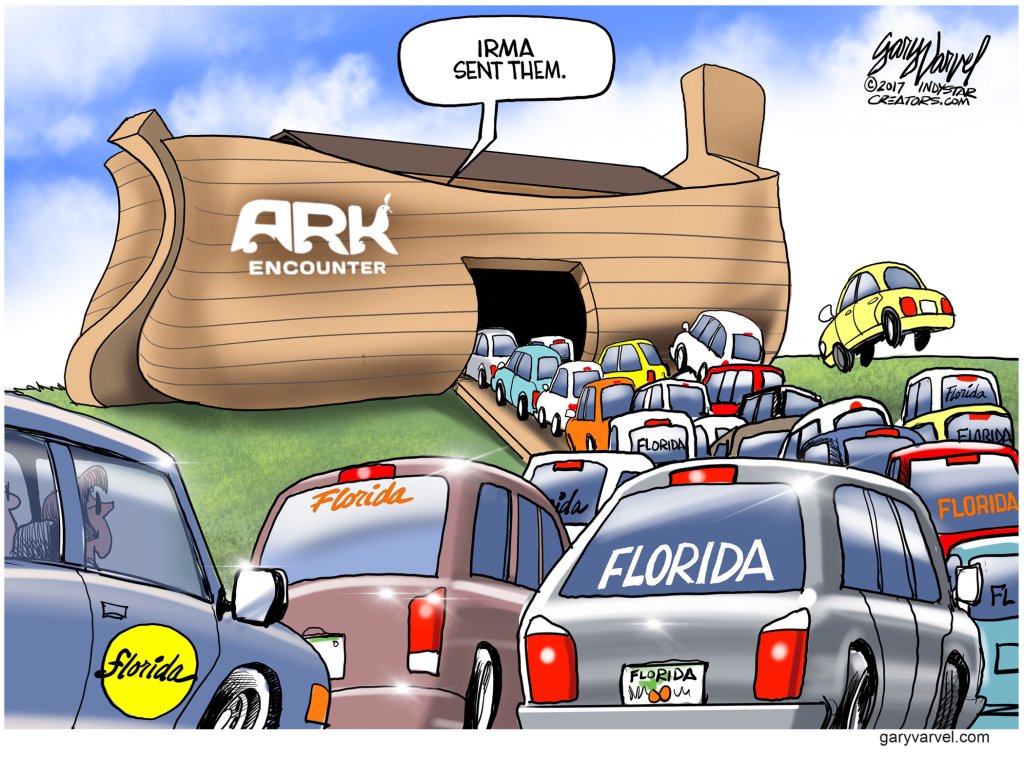 This is a very natural price rise that is to be expected when a hurricane hits Gulf states.

I don’t mind paying $3 a gallon for a few weeks; we paid it for seven years with Obama. But really, think of what the people in Texas are going through. Do we really have it that bad?

Every time there is a big storm, gas prices always go up because people freak out and insist on running to the gas station to get gas. Same reason grocery stores run out of milk and bread during bad weather.

In Rockwell Saturday morning, the two gas stations across from the Food Lion had one pump open between them. Later that day at the Exxon/Circle K, we were told that they were not at that time limiting gas purchases as their gas came from a different pipeline. … Their gas was $2.59 a gallon.

As was stated above, if that’s the worst thing I have to deal with in the coming weeks (and even if I have real hardship in coming weeks) I declare that I am blessed, not stressed, and highly favored.

The state of emergency was declared so that gas stations could not price gouge. If you see it call it in. Not sure what the price limit is. But I’m more than happy to pay a little more for gas than to have to try and regain everything I ever had.

Wilson has done some great things in recent years. Looking forward to how we can add that energy to what we already have going on here in Salisbury.

The maturity of the Salisbury Main Street Program and the pay scale demanded a person that had previous experience and was well-accomplished (a person with a record of getting things done). Larissa Harper certainly fits that criteria. Thanks to the city for doing its due diligence in finding and selecting a great new Main Street manager.

I am very excited to hear about the strengths and track record that Ms. Harper brings to the table.

I hope this is a new start to a very strong and united downtown. We need someone who will advocate for the current businesses while attracting and building relationships with new ones.

… Editorial: When will it be Rowan’s turn for growth?

Rowan County has problems and we all know it. At this time, drugs and killings seem to be at the top of the list.

I personally do not wish to become a Concord or Kannapolis. We should try not to be absorbed by Charlotte and become a bedroom community.

However, we have tons of great things that everyone seems to overlook. Centrally located in the state, between Charlotte and Greensboro; three colleges; arts, arts and more arts; Symphony; N.C. Transportation Museum.

No one is going to swoop in and save us or grant us wishes. It is up to us (citizens of Rowan County) to make this county what we all know it can be.

Yay! Let’s throw effort, time, and money into things that have zero impact on the community. Praying is fine, but it isn’t going to sustain people, allow people to pay bills. This ongoing lawsuit also doesn’t cast a good light on the county from the outside. We have enough problems; let’s not go out of our way to create additional issues.

This relates to the letter someone sent in about “When is it going to be Rowan’s turn” for economic growth? When we start worrying about it as much as we worry about things like this.

This is great news for our republic. Our republic is founded on the rule of law. The law — in this case the U.S. Constitution — prohibits the government from making law “respecting an establishment of religion.” That is irrelevant to the Board of Commissioners’ personal practice of opening meetings with prayer.

The law also prohibits the government from infringing on the freedom of speech. That’s exactly what the 4th Circuit decision does. It’s an act by the federal government to censor the speech of local elected officials.

I encourage the Board of Commissioners to keep fighting to protect the fundamental right of free speech.

You equate the timing of the monuments during “Jim Crow” to intimidate black people. This is a lie.

For many years as the South suffered under Reconstruction, the Yankees would not allow monuments to Southern dead. The Yankees got their National Cemeteries and their monuments. For many more years, the Southern people were too poor to have monuments erected.

The mayor only took responsibility for being “too lax” in past meetings and thus letting things “get out of hand.” She made no apology for her shushing and gavel pounding at the last meeting that ended with a citizen being asked to leave, with police on hand to remove her. …

Mayor Alexander has repeatedly stressed the need for civil discourse and decorum. At the very least, she should apologize for her incivility and indecorous behavior.

… Letter: An unflattering portrait of our mayor

Ms Troutman is right. The cartoon was ridiculous and disrespectful and did not represent reality in any manner. Our mayor is a kind and gracious woman doing her best.

Creating exaggerated cartoons of political figureheads is what an editorial cartoonist does, is it not?

$1.6 million for the renovation of just one space. Those of us who opposed purchasing the mall ain’t gonna say “I told you so,” but …

Don’t forget who the county commissioners were who saddled us with that thing: Craig Pierce (who, of course, falsely believed that it wouldn’t come anywhere near the renovation price), Mike Caskey and Jim Sides (who supposedly thinks we’ve forgotten and is reportedly planning on running next year).

I told them so. On video.

Curious what Rep. Ford’s plan is when/if the court throws out these new gerrymandered maps.

I would be proud to have Carl Ford as my N.C. senator.

I would like to see some opposition. If the new maps hold up, why wouldn’t someone run against him? The Democratic Party certainly needs some new faces.

Seriously, you have to laugh. Two of the most controversial reps say Rowan could benefit from these gerrymandered maps? We are high in poverty, low in excellence in our schools. We have residents who still can’t drink their well water and use bottled water for everything, etc.

What’s the common factor? We have been under Republican legislators. So, again, help me understand how maps drawn to keep the seats of Republicans allow this county to benefit.

It would be great for Rowan County if good candidates can be found to fill these gerrymandered districts … to replace all of our current office holders. We need folks who will vote for all citizens rather than our current Tea Party-inspired ones.

All it takes is one person with an idea — and this proves that. Great job! God bless you.

I am very excited to see my son’s life work coming to fruition at such an early age. He has always had a heart for history, accuracy and — most of all — archeology.

Whether the current intolerant climate of anti-Confederate history prevails or not, I think it is a criminal offense to destroy artifacts of significant historical importance. This attitude needs to be adjusted back to normalcy and accepting what is past is past. It is important to learn from history, not erase it for personal vendettas.

Great insight into this historic game! If you want to learn more, check out this book: “Appalachian State Silences the Big House: Behind the Greatest Upset in College Football History.”

I stayed at the Holiday Inn Express near the stadium and was so wound up after the game I couldn’t sleep, so at 3 a.m. I threw on some sweats and walked to the lobby. There were at least 30 App fans in the lobby watching ESPN. They were constantly showing highlights, and each time they did the room would erupt in cheers. No one in that hotel got a good night’s sleep that night.

Awesome article. I was there too. Go Apps!

As for the “left hand turn signals that don’t work”: You ever see that huge white line across intersections? That’s called a stop line. And behind said stop line, there are two rectangles carved into the pavement. Those rectangles hold magnetic sensors which activate the light controls.

When you pull your vehicle beyond the stop line, those sensors don’t register that a vehicle is there, and the lights won’t change — ever. …

When you pull up to an intersection and stare up at a red light, you anxiously await for it to turn green so you can be on your way. What happens if your light doesn’t turn green? If you are like most people, you get upset. With high gas prices and busy schedules, we don’t have time to sit behind red lights.

Signals that do not change could be malfunctioning, but a very common cause of this is where you stop your vehicle. There is a bold white line at the approach to every signalized intersection. This line is called a Stop Bar, and you should stop at this line, not beyond it. There are several reasons for this:

1. Stopping behind the stop bar ensures other motorists have room to maneuver with turns, etc.

2. Stopping behind the stop bar gives room for pedestrians to cross safely in front of your vehicle.

3. Stopping behind the stop bar places you in the proper position to be detected by the signal.

You see, at many intersections, there are inductive loops installed in the pavement (these are also sometimes called magnetic loop detectors). Look closely and you will notice thin lines in the pavement where the detectors are installed. When a car sits on top of the loop, it picks up the metal in the vehicle and sends a message to the signal controller that you are there and need to be served.

If you pull past the stop bar, the loop detector does not know you are there, so it does not send a signal, and you do not get your green light (unless someone happens to pull up behind you, and they get detected).

So next time you are at a red light and the green seems to be skipping you, take a look at where you are stopped. If you are past the stop bar, back up a little so that the loop detector can do its job and get you on your way.

If you are on a motorcycle or bicycle and the light will not change, try leaning your bike over slightly to see if the detector will pick up the metal. In most cases, this will solve the problem.