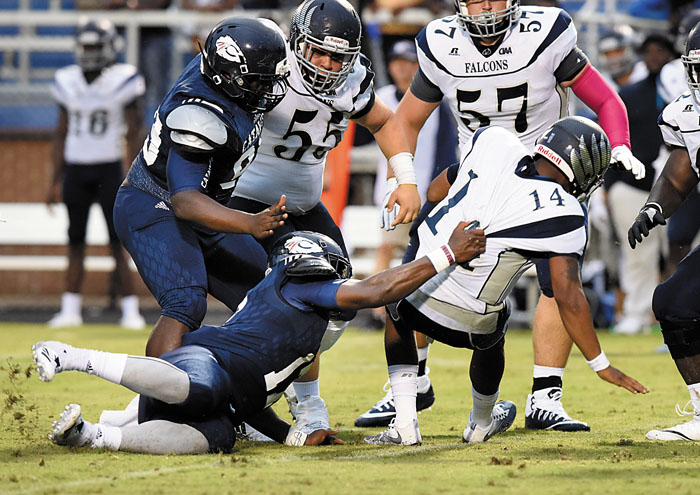 SALISBURY — Catawba hasn’t played Virginia Military Institute in football since 1990, when current Catawba head coach Curtis Walker was a linebacker and Joe Montana and Vanilla Ice were a big deal.

How did the unusual matchup come about? Walker explained that Catawba AD Larry Leckonby and VMI AD David Diles know each other well, and the game seemed like a good fit for both schedules.

“I’d like to play one of these games every year,” Walker said. “It’s a good gauge. It lets you know where your team is.”

VMI (0-1) will be the first FCS opponent Catawba has taken on since losing to Western Carolina, 35-17, in 2014. Prior to that, there was a 20-3 loss in 2011 to the FCS Coastal Carolina squad that had Walker orchestrating its defense.

VMI, by all measuring sticks, is a below-average FCS team. The last winning season for the Keydets was in 1981 when Ronald Reagan was the new guy in the White House.

Catawba believes it’s a very good Division II team, although the 49-0 romp against St. Augustine’s last Thursday didn’t provide any sort of adversity at all, so it was hard to tell.

“Looking at the film, we didn’t play our best,” Walker said. “There were a lot of mistakes. We’ve got to take care of those things if we’re going to keep winning.”

The big question at Tuesday’s press conference was, “Is this a game Catawba can win?”

Maybe it is. The fact that VMI opened with a 62-0 loss (to Air Force) and probably lost its starting quarterback for an extended period in the process didn’t dampen anyone’s optimism.

No Catawba Indian answered the can-you-win question directly, not yes or no, but the mood and body language of players and coaches was upbeat. There wasn’t just hope, there was confidence.

“When you play a team from a higher classification, there’s definitely a belief factor involved,” Catawba cornerbacks coach Marco Butler said. “If you’re the D-II guys playing the D-I guys, this is a great opportunity to prove yourself. You just have to keep reminding yourself that it’s just football.”

Walker is familiar with the hostile environment that the Indians will be invading. He’s traveled to Lexington as an assistant coach as well as a player. Coastal Carolina and VMI were league opponents during his time with the Chanticleers.

“There will be a lot of men in uniform there,” Walker said. “They usually give everybody leave if the team wins, so they’ll have plenty of incentive to beat us.”

While VMI is a military school, an important difference from service academies such as Army and Navy is that students have a military option, not a military obligation, after graduation. Still, Catawba is going to be taking on athletes who are tough mentally, athletes who get up early to march and salute, athletes who live in barracks, not dorms.

“They’re a military school, so we’ll be facing some challenges,” said Catawba linebacker Kyle Kitchens, the reigning South Atlantic Conference Defensive Player of the Week. “You know they’ll be disciplined and you know they’ll be strong. And we’re playing at their place.”

Quality bulletin-board material for the game  has been provided. An excerpt from the Roanoke Times’ report on VMI’s loss at Air Force has been printed out and posted in Catawba ‘s Hayes Field House.

It reads: “There was no word Sunday from VMI whether (injured QB Austin) Coulling will be able to play in VMI’s home opener Saturday against Catawba. The Keydets shouldn’t need their top QB facing the Division II Indians from Salisbury, North Carolina.”

“We got off to a good start last week,” said Catawba receiver Sam Mobley, dodging that quote as effectively as he dodged tacklers in Thursday’s three-TD effort. “No matter who we’re playing, we just want to keep building momentum.”

Catawba quarterback Reid Carlton, 9-for-10 passing in the opener, said that he and UNC Pembroke transfer Patrick O’Brien have brought out the best in each other through a spirited QB competition. Carlton couldn’t have played any better than he did last Thursday. Now he expects to keep it rolling.

“Preparation this week is mostly going to be about us, not about VMI,” Carlton said. “We’ve got to keep doing what we do and keep getting better. No matter who you play the mindset has to be, ‘Let’s go get a win.'”

Some of Catawba’s long-term preparation for VMI was rendered obsolete by tweaks to the VMI offense. VMI won’t be running the triple option, usually a staple of the military academies.

“Watching the film of VMI’s game with Air Force, they were using a different offense than what we expected to see,” Walker said. “They were using a lot of misdirection, and we’ll have to prepare for that.”

Defensively, VMI will offer a maze of different looks for Carlton and O’Brien to decipher. It’s an attacking defense that seeks to create turnovers.

It’s a Saturday to look forward to for Catawba fans. It’s a chance for the Indians to play in 10,000-seat Foster Stadium and there’s a fighting chance to register a signature victory.

There were some crazy upsets  in Week 1 of the college football season. Who knows what Week 2 will bring?

“No one is looking back at what we did last week,” Kitchens said. “That’s in the past. We’re all thinking about the next one.”