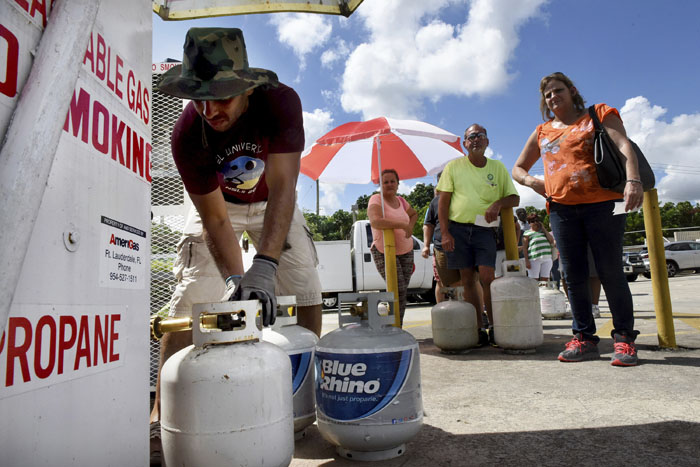 SALISBURY — Local emergency responders said Thursday they are prepared if Hurricane Irma does damage in Rowan County, a day after Gov. Roy Cooper declared a state of emergency in North Carolina.

Weather experts have said North Carolina will see some impact from the storm but it’s too early to tell what part of the state will see the greatest hazards.

Even so, responders and other public entities gathered Thursday afternoon for a conference-call briefing on the status of the storm and to identify any potential gaps in response plans.

Residents are advised to be prepared for the potential impact from the storm, said Frank Thomason, chief of Rowan County emergency services.

He said it’s better to be overprepared than not prepared at all.

Weather experts have called Irma one of the strongest storms to ever form in the Atlantic Ocean. The storm is predicted to hit Florida, then take a northwest track into South Carolina and then North Carolina, Thomason said.

It’s expected to affect North Carolina late Monday night with 50-mph winds and rainfall in the 4- to 6-inch range.

The impact to Rowan County is expected to be less severe than for those who live on the coast.

Thomason said that being in the storm track increases the potential for tornadoes in the area.

Officials with the Rowan County Emergency Operations Center will monitor the hurricane with notification updates being made to key agencies.

Salisbury staff and crews will send real-time updates via Nixle and Facebook only, officials said. Residents are encouraged to sign up for the notification service by texting the word Salisbury or their ZIP code to 888777 for updates. The service is free.

Salisbury Police Chief Jerry Stokes said officers will operate on 12-hour shifts until they are not needed as intensely. Stokes and Maj. Shon Barnes will coordinate with officers, and captains will be on duty at all times at the operations command.

Salisbury has an emergency water inter-connection with the city of Statesville that could supplement the drinking water supply in case of an emergency, said Jim Behmer, director of Salisbury-Rowan Utilities.

He said the utility has generators and crews on standby.

“We are in good condition,” Behmer said.

Novant Health Rowan Medical Center officials said they are prepared to care for patients and take on patients from nearby facilities if the need arises.

Kannapolis city officials said they have topped off fuel storage, and the emergency operations center has been staged and is ready, if needed.

“Our city emergency management staff members are in contact with county emergency officials, who communicate with state officials, on a daily basis to ensure we are ready to address any issues related to Hurricane Irma. For your safety, please monitor local and national weather outlets, stay informed and be prepared,” Kannapolis Mayor Darrell Hinnant said.

Officials with the Hefner VA Medical Center said the Salisbury facility may become a staging area and there is a potential to activate the federal coordinating center in Charlotte, but at this point it has not been done. The facility has three large buses capable of transporting patients.

There are more than a dozen places throughout the county that are designated as emergency shelters, including churches, YMCA facilities, and recreation facilities.

According to disaster specialist Heather LeMaster, the Hanford Dole Chapter of the American Red Cross has the capacity to handle shelter needs in the county. Red Cross staff and volunteers will work with the emergency services office to determine when to open shelters and what locations throughout the county are needed.

Area grocery stores are also monitoring the storm and working to keep supplies on the shelves.

Food Lion officials said they are providing additional shipments of water, food, batteries and other items to stores to help keep products available for customers.

“We will continue to carefully monitor the storm and are ensuring that our shelves are stocked with essential items customers may need during this time, including working closely with our vendor partners to ensure products are available and restocked,” said Christy Phillips-Brown, a Food Lion spokeswoman.

Phillips-Brown said Food Lion stores are experiencing an increase in traffic and customers are buying items including bread, ice, canned meat, water, and household items such as charcoal and batteries.

She said in addition to making sure products are on the shelves, the company is taking precautions to protect workers and stores from the storm and to mobilize workers to support any potential recovery efforts after the storm.

Catawba College’s Provost Office issued a statement via social media site Facebook saying that although the definite path of the storm has yet to be determined, the college is prepared.

There is a possibility of power outages, flooding, downed trees and wind damage, the post said.

The college suggests students who must drive not drive on water-covered roadways and be alert for downed power lines and fallen trees. There have been some gasoline shortages because of Hurricane Harvey, and students may have enough gas to travel out but not get back if they leave campus.

Members of Catawba’s Emergency Response Group met Thursday and determined that if classes are canceled or delayed next week, students will be notified through the college’s CatawbaAlerts system.

The college’s food service provider, Chartwells, has stocked adequate food to feed residential students. Each building has an emergency shelter zone in case of high winds, the advisory said.

Students living both on and off campus are encouraged to have a flashlight and batteries and to keep all electronic devices charged in preparation for the storm.

Students can stay informed about possible emergencies at www.catawba.edu/emergency.

According to Kimberly Harrington, assistant director of public relations, if classes are canceled or delayed or if the response team deems it necessary to evacuate, students will be given ample notification through the college’s emergency alert system.

The campus’ food service provider has stocked up on food and beverages to make sure there is an adequate supply for those who live on campus. Harrington said students who live off campus are encouraged to stock up on food and water before the storm hits.

Students who plan to travel over the next 72 hours should take extra precautions, Harrington said, especially if travel plans require travel south of Salisbury, which would place motorists heading into the path of Hurricane Irma.

Fire, EMS and police agencies in the county have planned to meet in the coming days or already have personnel on standby to be available if the storm should strike here.

Transportation crews have fueled trucks and prepared crews to respond Monday, if needed.