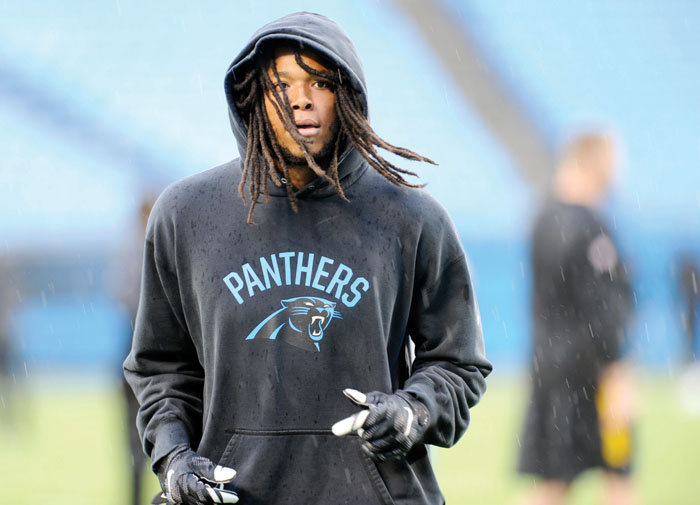 FILE - This Aug. 31, 2017 file photo shows Carolina Panthers' Kelvin Benjamin warming up before an NFL preseason football game against the Pittsburgh Steelers in Charlotte, N.C. Benjamin said he is dedicating the season to his mother Christine, who passed away in July. (AP Photo/Mike McCarn)

CHARLOTTE (AP) — If Kelvin Benjamin had a bad game, he always knew where to turn.

If the media got on him about dropped passes, or people on social media were bullying him for being overweight and out of shape, he knew talking to his mother Christine would make him feel just a little better.

“She was my everything, man,” Benjamin said Tuesday.

The 26-year-old Benjamin is still processing his mother’s death, which came unexpectedly one week before the start of training camp in mid-July.

Benjamin, who already had plenty of motivation this season — including playing for a new contract — now has something that he said will drive him even more to succeed. He’s dedicated this season to his mom, who raised him and three other siblings on her own in Belle Glade, Florida.

Now, whenever he steps on the field Benjamin said he’s thinking about her “pretty much all of the time,” and eager to make her proud.

“That’s why I’m going hard — I’m playing for her,” Benjamin said. “Knowing she won’t be to the games. I mean, all I got is football.”

Benjamin and Carolina open the season at San Francisco on Sunday.

Teammates noticed Benjamin’s newly honed focus during the preseason, where he caught two touchdown passes including an impressive leaping grab in the end zone.

Benjamin set Carolina franchise rookie records in 2014 with 73 catches for 1,008 yards and nine touchdowns, but tore his ACL the following summer in training camp. He was slow to return in 2016, but improved as the season progressed and finished with a solid 63 receptions for 941 yards and seven touchdowns.

“Last year was a struggle coming back and I think a lot of people don’t understand ACLs and that those type of major surgeries are not 12 months,” coach Ron Rivera said. “There are very few guys who are like Adrian Peterson, who can come back as quickly as he did. Kelvin is one of those guys who took a little longer.”

Benjamin reported to OTAs this past spring overweight, but has worked himself back into shape. He made weight at check in at training camp while dealing with his mother’s death. He said he was grateful that he had the help of teammates at the intimate surroundings of Wofford College to take his mind off things.

“It was good because I didn’t really have time to grieve,” Benjamin said. “I had to get right back into football so I think it kept me focused and kept me grinding.”

Benjamin said he leaned heavily on Newton and former Panthers quarterback Joe Webb to get through the rough days.

Benjamin helped his mother retire after signing his rookie contract in Carolina in 2014. He’d send her on vacations and bring her to Charlotte to watch Panthers games, too.

He was planning to buy her a new house — something he had always wanted to do — when he signed his next contract.

It was something she deserved, he said.

“I was the baby, so most of the kids were out of the house,” Benjamin said. “I was still kind of hard on her because I was big and I did my own things. But I listened to her, man. She raised me right.”

MIAMI (AP) — The Miami Dolphins and Tampa Bay Buccaneers will open the season with a hurricane-imposed bye.

Their opener scheduled for Sunday was postponed by the NFL until Nov. 19 because of Hurricane Irma.

“This is bigger than football,” Buccaneers quarterback Jameis Winston said. “I just want everyone to be safe. Football is not important right now.”

Switching the game to Week 11 was possible because that had been a bye week for both teams. NFL officials earlier announced the game would not be played in Miami this week.

The league also decided against playing this weekend at a neutral site, perhaps in Pennsylvania.

Irma is forecast to threaten much of Florida beginning this weekend.

“The No. 1 thing any of us should be thinking about is the safety of everyone involved,” Koetter said. “It’s a natural disaster. Football takes a back seat to all of that.”

Still, the scheduling situation prompted extensive discussions and speculation before the decision. Both teams resisted switching to Nov. 19 because it means playing the entire season without a break.

“Our guys kind of need that bye week to get healthy and kind of push through the second half of the season,” Dolphins quarterback Jay Cutler said Tuesday. “It’s not an ideal situation not to have a bye.”

Koetter tried to downplay the potential impact of playing 16 weeks in a row.

Maybe it won’t matter. The Dolphins went without a bye in 1992, which they gave up when their scheduled opener was postponed because of Hurricane Andrew. That’s the last Miami team to reach the AFC championship game.

The 2017 Dolphins will now open Sept. 17 at the Los Angeles Chargers, and their first home game won’t be until Oct. 8 against the Tennessee Titans. Their game at London on Oct. 1 against New Orleans is designated a home game for Miami.

Tampa Bay will open Sept. 17 at home against the Chicago Bears.

The Buccaneers practiced Wednesday. But the Dolphins canceled practice, deflated their indoor practice bubble, and gave players the rest of the week off to prepare for the hurricane.

“A lot these guys have a lot on their plate: moving their families, and you’ve got people coming in, and your house and your cars,” said Cutler, who joined the team a month ago.

“I’m one of the few lucky ones. I’ve got a car here and a bag full of clothes, and that’s kind of it. But you’ve got a lot of guys in that locker room that are going through a lot of things in their head, and we’ve got to be mindful of that and help them any way possible.”

The menace of Irma and the postponement of the opener are the latest setbacks for the Dolphins. They endured an injury-filled training camp that included the loss of quarterback Ryan Tannehill, who required season-ending knee surgery.

Bennett says he feared for his life in Las…