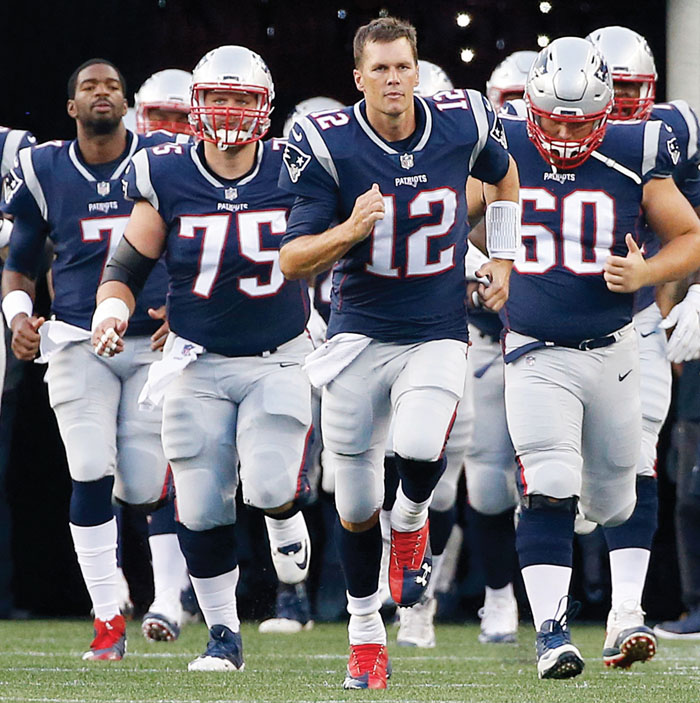 AP Photo/Mary Schwalm, File ... New England Patriots quarterback Tom Brady (12) leads his team onto the field during an NFL preseason game on Aug. 10. Brady will lead the defending champions out for real tonight as the Patriots host the Kansas City Chiefs in the first game of the regular season.

FOXBOROUGH, Mass. (AP) — The New England Patriots are set to kick off another season in the afterglow of a Super Bowl title.

Seven months after completing the largest comeback in Super Bowl history, the Patriots will raise the franchise’s fifth championship banner prior to Thursday night’s season opener against the Kansas City Chiefs.

It’s what’s come to be a familiar sight ever since Bill Belichick and Tom Brady captured their first Lombardi Trophy together in 2001.

Trying to spoil this latest party will be a Kansas City team that has been chasing its own post-championship commemoration since the franchise won its lone Super Bowl in 1970.

The Chiefs were the No.  2 seed in the AFC playoffs last season before having their postseason run truncated by an 18-16 loss to Pittsburgh in the divisional round.

The Patriots are 4-0 in season openers following a Super Bowl win, but have vast respect for a Kansas City team that has been responsible for some sour Patriots memories during the Belichick-Brady era.

The previous time Brady opened a season at home against the Chiefs in 2008, it ended with him limping off the field with a season-ending knee injury . Then in 2014, Kansas City flatly embarrassed New England 41-14 in Arrowhead Stadium.

“I respect the way they play. They’re always tough. We’ve always had great battles with them,” Belichick said. “I can’t think of too many teams that have handled us better than the way they handled us in 2014.”

But that win was Reid’s lone head-to-head victory against Belichick.

“He does a heck of a job with his team,” Reid said. “To be able to sustain as long as he’s sustained is really something. That’s a phenomenal thing in this profession.”

Professional respect aside, the matchup will be an early glimpse of how formidable the Patriots are after only losing a few pieces off last season’s roster. They will reveal a new-look running game after not re-signing LeGarrette Blount, last season’s rushing touchdowns leader. In addition, receiving stalwart Julian Edelman is out for the season following a preseason knee injury.

And on defense they’re without a dedicated edge rusher with Chris Long leaving in free agency and Rob Ninkovich retiring.

“When the schedule comes out, you’ve got this first game that is the only one you’re really looking at and all the preparation, everything’s building for this week,” Brady said. “It goes for both sides. I’m sure they’re looking forward to it, too.”

EAGER DEFENSE: As much continuity as New England will have on the field, the Chiefs will trot out an equally stout defense that had a league-best 33 takeaways in 2016. They’re eager to see how it fares against a now 40-year-old Brady and the defending champs.

“Nothing is downplayed,” safety Eric Berry said of the matchup. “We have our own perspective in the building among each other and we have big expectations for this season, but it takes place one game at a time. We are going to put everything we have into this game and this game plan and take it from there.”

R-E-S-P-E-C-T: Reid and Belichick have matched wits plenty of times over the years. Belichick has the most wins among active NFL coaches with 263, while Reid is second with 184.

GRONK RETURNS: Being a spectator over the final eight games of the regular season and playoffs was not fun for Gronkowski. While rehabbing from back surgery this offseason, he also adopted the strict diet regimen that Brady says has helped keep him healthy since the 2008 injury. Gronk says he’s eager to show he still has the skills that made him one of the most dominating tight ends in football.

ROOKIE WATCH: The Chiefs planned to use Spencer Ware and Kareem Hunt in tandem at running back, but Ware went down with a season-ending injury in a preseason game at Seattle. So it’s up to Hunt, a third-round draft pick, to carry the load for Kansas City.

Charcandrick West and C.J. Spiller will give him a breather.

“We put a good amount on his plate,” Chiefs offensive coordinator Matt Nagy said. “So far, he’s done a great job with it.”

Keys makes it an all-American final four at the…