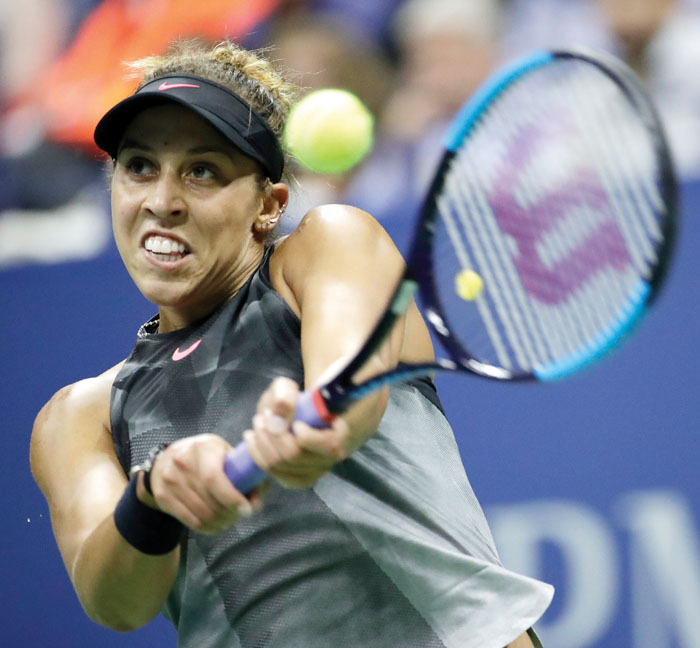 Madison Keys, of the United States, returns a shot to Kaia Kanepi, of Estonia, during the quarterfinals of the U.S. Open tennis tournament, Wednesday, Sept. 6, 2017, in New York. (AP Photo/Julio Cortez)

Madison Keys has made it an all-American women’s final four at the U.S. Open.

The No. 15 seed beat Kaia Kanepi 6-3, 6-3 to reach the semifinals of a Grand Slam tournament for the second time.

She will face No. 20 CoCo Vandeweghe on Thursday night in the second semifinal, after ninth-seeded Venus Williams faces unseeded Sloane Stephens.

The Americans hadn’t had all four semifinalists at the U.S. Open since 1981, when Tracy Austin beat Martina Navratilova for the title. Chris Evert and Barbara Potter also made the semifinals.

The last time it happened at any Grand Slam tournament was at Wimbledon in 1985, with Navratilova and Evert joined by Zina Garrison and Kathy Rinaldi.

The U.S. Open is guaranteed its first all-American final since Serena Williams beat Venus in 2002.

The No. 20 seed matched her best result in a Grand Slam tournament, having also reached the final four at the Australian Open in January.

No. 9 Venus Williams and Sloane Stephens are already into the semifinals.

Rafael Nadal knew he would have to talk about Roger Federer the player.

But this is no time to talk about Roger Federer the man.

So when Nadal was asked during his press conference what he admired most about Federer off the court, he had to draw a line.

“I don’t want to look like I’m going to be his boyfriend, no?” Nadal said to laughter. “We don’t want to talk these kind of things before (an) important match.”

The longtime rivals would meet for the first time at the U.S. Open if Federer won his quarterfinal match later Wednesday against 2009 champion Juan Martin del Potro.

Nadal did go on to praise Federer as a great ambassador for tennis with good values, adding they’ve always had a good relationship.

Rafael Nadal had about as easy a time as possible in the U.S. Open quarterfinals, beating 19-year-old Russian Andrey Rublev 6-1, 6-2, 6-2 in a little more than 1½ hours to close in on a showdown with Roger Federer.

There was no suspense to the No. 1-seeded Nadal’s matchup with the 53rd-ranked Rublev.

Nadal, a two-time U.S. Open winner, and Federer, a five-time champion, have never met at Flushing Meadows. Federer can change that by winning his quarterfinal against Juan Martin del Potro later Wednesday.

Wimbledon champion Garbine Muguruza is assured of moving up to No. 1 in the WTA rankings for the first time, despite losing in the U.S. Open’s fourth round.

Muguruza’s rise from No. 3 to the top spot when Monday’s rankings are issued was clinched when current No. 1 Karolina Pliskova lost in the quarterfinals at Flushing Meadows.

No. 15 Madison Keys could join them Wednesday night.

CoCo Vandeweghe has taken the first set from No. 1 seed Karolina Pliskova in the U.S. Open women’s quarterfinals.

The No. 20 seed Vandeweghe leads 7-6 (7-4). She is trying to become the third American into the semifinals, following victories Tuesday by No. 9 Venus Williams and Sloane Stephens.

Pliskova needs to reach the final to retain the No. 1 ranking after the Open.

Roger Federer and Rafael Nadal each need a victory to finally meet at the U.S. Open.

Juan Martin del Potro stopped them before and has a chance to do it again.

Federer faces No. 24 seed del Potro in a matchup of former champions, and the top-seeded Nadal takes on Russian teenager Andrey Rublev on Wednesday in quarterfinal action.

It’s the sixth time the longtime rivals have been a victory apiece from meeting at the U.S. Open, the only major where they’ve never played. One of those was in 2009, when del Potro beat Nadal in the semifinals and then ended Federer’s five-year reign in the final.

On the women’s side, No. 15 Madison Keys and No. 20 CoCo Vandeweghe can make it an all-American final four, needing victories to join Venus Williams and Sloane Stephens in the semifinals.