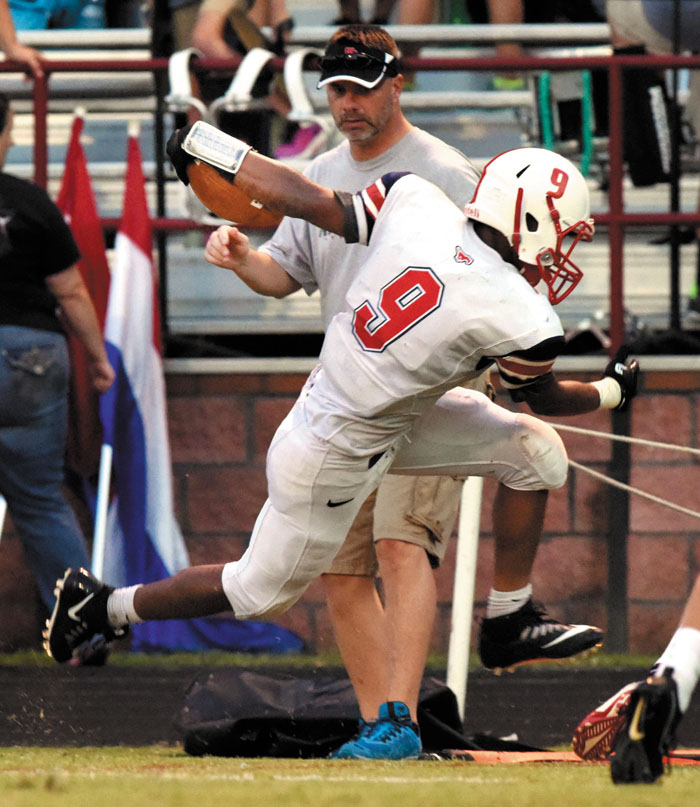 East Rowan's Sam Wall (9) goes down the sideline. Photo by Wayne Hinshaw, for the Salisbury Post

Sam’s older brother, Max, who finished his career in 2016 with 4,005 rushing yards, had three of those 14. Cal Hayes Jr. had the most with four. Thomas Lowe had two, while James Forney, David Dowd, Calvin Edwards and Jerry Sifford accounted for one each. Sifford had the first one for the Mustangs in 1968, rushing for 214 yards against North Iredell.

Junior Gabe Hinceman has been the county’s most versatile scorer, with a receiving TD, a pick-six and 10 PAT kicks. The pick-six came early against South Rowan.

Young backs Tahj Young and Sammy Pinkney got their first varsity TDs in the South game.

East owns a two-game winning streak, the first for the Mustangs since back-to-back playoff victories in 2014 against Freedom and West Henderson.

East plays Friday at Central Cabarrus, against former ER coach Kenneth McClamrock, who was the helm for those two playoff victories.

Lineman Kenny Clarke, who plays on both sides of the ball, was injured on opening night. He’s expected to return to action on Friday when Carson goes to North Rowan.

Coach Joe Pinyan said  a bright spot in the early going has been the blocking of back Josh Lee. It’s critical in Pinyan’s offense that backs play as hard without the ball as the do when they carry it, and Lee has taken that to heart.

QB Cole’s Sifford’s numbers have been down the past two weeks, but Pinyan has no problem with Sifford’s effort.

“He’s still getting something when there’s nothing there,” Pinyan said. “He’s still Cole.”

Last Thursday’s 50-0 loss to A.L. Brown was pretty ugly and dropped the Cougars to 1-2.

“Everyone would love to be 3-0, but we’re 1-2 and a lot of pretty good teams are 1-2 right now,” Pinyan said. “That team we’re playing Friday (North Rowan) was staring 1-2 right in the face before they made a big comeback against Lexington.”

Pinyan is optimistic the Cougars are better than they’ve looked so far.

“We’ve got small numbers and we knew the non-conference part of the schedule was going to really tough for us,” Pinyan said. “But our kids have kept a great attitude and our coaches have a great attitude. Everyone is working as hard as they can to get better and we’re building on our positives every day. Now if we can just eliminate those huge mistakes we’ve been making, we’ll give ourselves a chance to beat some people.”

It’s a mixed blessing when a safety is the team’s leading tackler, but coach Daniel Yow  praised Christian Reynolds, a 5-foot-8, 165-pound junior for his effort in Monday’s 41-8 loss to East Rowan.

“He made 12 tackles and he was all over the field,” Yow said.

Kory Sellers, a senior, accounted for most of South’s big plays in Monday’s loss. Sellers has rushed for 138 yards on only seven carries in South’s first two games. He has 11 catches for 156 yards and a touchdown.

“I’m very proud of a few of our kids, but we need more of them to play well,”Yow said. “We’ve had two good practices and even we got in a productive practice in the rain on Wednesday. It was a little sloppy, cleats got a little wet, but the guys did well.”

Jaleel Webster produced 180 rushing yards and 80 receiving yards in Monday’s incredible 44-37 win against Lexington. Malcolm Wilson bounced back with  a career-best 129 rushing yards after getting very little in the loss to West Rowan. Center Will Anthony led the blocking.

“They got in a groove, and those two backs did exactly what we expect them to do,” North coach Ben Hampton said.

Among the amazing things that happened in North’s win was converting on three straight 2-point conversions in  a matter of minutes to get from down 37-13  to 37-37.

“You go into a game knowing you might need a good 2-point play, but you never expect to have to use three,” North coach Ben Hampton said. “When you’re at midfield, you feel like any play you want to run can get you 3 yards, but when you’re down there for a 2-point conversion and everyone’s packed in tight, it’s not easy to get those 3 yards. I give a lot of credit to our kids for executing.”

Wilson and Chaz McCombs caught 2-point passes, and Webster ran one in.

North QB Willis Mitchell had a crazy night. He was benched after a red zone fumble and a pick-six, but Mitchell returned to the huddle and directed the epic comeback. He scored three rushing TDs.

“He could’ve packed it in, obviously, but he didn’t,” Hampton said. “He did a great job of managing the game in the fourth quarter.”

Everyone had something to say about North’s comeback on Monday.

“It’s funny because I’m not sure you want to brag too much about a game where you got down 24 points,” Hampton said. “But what a great win for our kids. That’s a win that can be a program-builder.There’s some good stuff there.”

Receiver Quintous Smith had a quiet night catching passes, but he scored the deciding TD on a right-to-left  jet sweep.

“He’s a phenomenal athlete,” Hampton said. “That’s a kid you’re going to be hearing from.”

North allowed nearly 600 yards to Lexington and plunged to the bottom of the county defensive stats, but the Cavaliers are thrilled to be 2-1.

In a bad-weather week the only team that was scheduled to play but didn’t get a game in was Salisbury. The Hornets were supposed to play at home against Mountain Heritage, a team making a 3-hour trip by charter bus from Burnsville.

Salisbury coach Brian Hinson was on the phone with Mountain Heritage coach Joey Robinson on Wednesday morning, as they watched storm reports. The rain was expected to hit Thursday morning and last all day, so they stuck with playing the game Friday. When Friday brought thunderstorms and tornado warnings, trying to get Mountain Heritage to Salisbury wasn’t a viable option.

Fields were soaked Saturday. Salisbury didn’t want to push the game back to Monday, not with a big CCC encounter with Thomasville looming on Friday, so the game was canceled.

Salisbury (1-1) would have been glad to take on the challenge, but Hinson saw enough of Mountain Heritage QB Trey Robinson on film to know he’s one of the state’s best players.

“If I was a college coach, I’d offer him a scholarship tomorrow,” Hinson said. “He’s tough, he’s strong, he’s physical and he’d be a great quarterback for a college team that runs the option.  There’s also a lot of places where he could be a linebacker.”

There’s good news on the injury front. Salisbury will have linebacker Nick Austin back for the Thomasville game.

“When Nick got hurt (opening night), the doctor said 10 to 14 days, and we were going to keep him out for the full 14,” Hinson said. “We weren’t going to risk him in non-conference games. We want him at 100 percent for the rest of the season.”

Hinson said Thomasville is a “mirror image” of Salisbury.

“They’ve got really good linebackers and receivers,” Pinyan said. “They’re a little bigger than us and they’ve got athletes all over the field.”

The Falcons have been off since their big county win against North Rowan.

They’ll take on another rival, Davie County, on Friday.

“Davie is really good on defense and they’re getting better offensively,” West coach Joe Nixon said.  “(Star receiver) Cooper Wall is close to getting back, and it could be this week, so we’ve got to be prepared for him to be playing.”

Nixon said the Falcons (1-1) were able to practice outside on Wednesday despite the weather.

“It actually was a pretty good practice,” he said. “We’re plugging along, getting a little better every day, and  we know we’ve got to get a whole lot better. We’re heading into the really tough part of our non-conference schedule.”

The Davie game will be followed by contests against A.L. Brown at home (the first once since 2005) and at Concord.

Nixon believes the move of Brandon Wallace from linebacker to defensive back has made the Falcons better.

A 34-13 victory over Mooresville was aided by the season debut of senior receiver Mason Williams,  who had two catches for 49 yards. He caught 30 balls last season.

Linebacker Cody Hendrix has been a monster for the War Eagles (1-2) with 52 tackles in three games, seven for loss.

DB Hite Merrifield, a Wake Forest baseball commit, isn’t expected to play the rest of the season because of concussion concerns.

Wall, a monster as a junior with 60 catches for 937 yards and 15 TDs, is getting close to his season debut.

The best news out of Kannapolis this week was pitcher/outfielder Cordarius Butler committing to UNC Pembroke’s baseball program.

Butler, the starting quarterback on opening day of the 2016 season against Concord, is still working his way back from the horrific knee injury he suffered that night.

Butler is back to throwing 85 mph, and while he isn’t yet 100 percent, he’s been released for all baseball activities. He’ll be playing with the high-powered South Charlotte Panthers organization this fall.

The Wonders (2-1) cruised past Carson last Thursday and are preparing for Friday’s Military Appreciation Night home game with Mooresville.

Who knows what to expect from the Blue Devils, who mauled West Rowan but also took a mauling from Davie County?