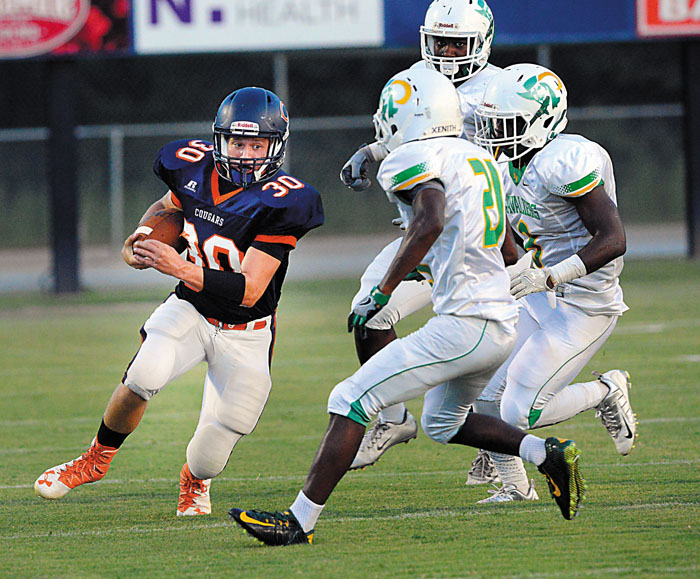 Wayne Hinshaw/for the Salisbury Post ... In a photo from last season, North Rowan’s Terron Smith (21) closes in to make a tackle on Carson’s Bailey Rayfield (30). Smith, who now wears No. 4 for the Cavaliers, had a great game on Monday against Lexington, as North erased a 24-point deficit to win, 44-37.

SPENCER — North Rowan head coach Ben Hampton’s voice still was quivering with emotion, and this was late Tuesday afternoon, 19 hours after the Cavaliers pulled off a comeback for the ages and won at Lexington, 44-37, on Monday night.

Down 24 points with under 11 minutes left, North finally punched the clock on Labor Day, reported for work — and won. North has played football since 1958. The Cavaliers (2-1) had never prevailed in a game in which they’d allowed so many points.

North won the fourth quarter, 31-0, on the road against a talented team that, at the very least, is going to have a winning season. Everyone in the North camp left Lexington’s Philpott Stadium believing that the Yellow Jackets (1-1) will win eight or nine games.

“Riding back, I told (assistant coach Mark) Woody that I’d never been part of anything like that. not as a player or a coach,” Hampton said. “Woody said, ‘Ben, I’ve been around a lot longer than you, and I’ve never seen anything like it, either.'”

The first half was chaos for North. The offensive line struggled to open holes, and North has to run to be successful.  Turnovers happened. Special teams faltered. The defense got winded in the face of a furiously paced Lexington attack.

“Very tough game, but in a game that’s going like that, you have to find a way to come back together as a team,” said Terren “Compton” Smith, a cornerback in North’s 4-2-5 defensive scheme. “Their quarterback was really good, especially with his legs, a true dual-threat QB. You could cover everybody, and he’d still get a big gain.”

“Lexington’s best play,” added long-time North assistant Bill Kesler, “was when the QB didn’t have anyone to throw to and would just start running around. Their second-best play was when he’d fake the ball to a running back and keep it.”

The Yellow Jackets led, 37-13, after QB Saafir Craven romped 76 yards with 2:15 left in the third quarter, the band was loud enough to send North fans in search of aspirin, and Lexington was one defensive stop or one offensive score from securing victory and ending a four-game losing skid in the rivalry. But in those last 14 mind-blowing minutes, Lexington would get zero stops and zero points.

Quarterback Willis Mitchell, benched for a while, and running backs Jaleel Webster and Malcolm Wilson pulled North back in the game — on the ground — behind a rejuvenated offensive line, led by center Will Anthony. Not many comebacks of this magnitude are made by running the ball (plus one big screen to Webster), but this one was.

North’s defense, battered, bruised and bewildered for three quarters, dug in, as the fourth quarter unfolded. North got quick stops. It helped that Craven missed  a series after cramping following his lengthy touchdown run. Lexington went three-and-out on the crucial series he missed.

“It was like we flipped a switch on both sides of the ball in the fourth quarter, ” Hampton said. “It was hard to explain, but it was fun to watch. I do know one thing. No one who was out there will ever forget it.”

North Rowan defensive coordinator Josh Sophia said the most important guy for the Cavaliers’ defense down the stretch was the 5-foot-10, 175-pound Smith. Smith answers to “Compton,” because he moved from the California city, just south of downtown Los Angeles, prior to last season.

“We’ve been kind of waiting for him to come on and have that breakout game, and this was it,” Hampton said. “He’s always been good in man-to-man coverage, but he’s still been learning when it comes to our zone stuff. This time he did everything right. He broke up a lot of passes, four of five of them. Lexington took a lot of pokes at him. He kept coming through.”

After three North touchdowns, three 2-point conversions and three defensive stops — Craven was shaken up trying to pass on that third stop — North was back even at 37-all. When receiver Quintous Smith scored on a jet sweep with 1:57 left and Jacob Young kicked the PAT, North led for the first time at 44-37.

There was just one problem. North had scored so quickly that Lexington still had sufficient time to mount a last-ditch effort.

“We probably should’ve taken more time off the clock,” Hampton said. “But as an offensive coach, you’re just worried about getting those points on the board any way you can.”

As Hampton feared, Lexington started a drive. Terren Smith tried to stop it. He had a loud hit on a receiver who went airborne to pull down a pass.

A “big slam,” is how Smith phrased it.

Nasheed Peoples quarterbacked Lexington on that last push. The Yellow Jackets picked up a first down at the North 33 and still had time to take shots deep.

But  that’s when Terren Smith made an interception at the North goal line to seal victory.

“We were in cloud coverage (Smith and two safeties were deep), making sure they didn’t get behind us and hoping we could tackle them if they caught it in front of us,” Hampton said. “He played it great, had good position and made a timely break on the ball for the big interception.”

All the Cavaliers learned some things on Monday. About football and themselves.

“What we learned is no matter how bad it looks, you keep playing,” Terren Smith said. “We played through a lot.”