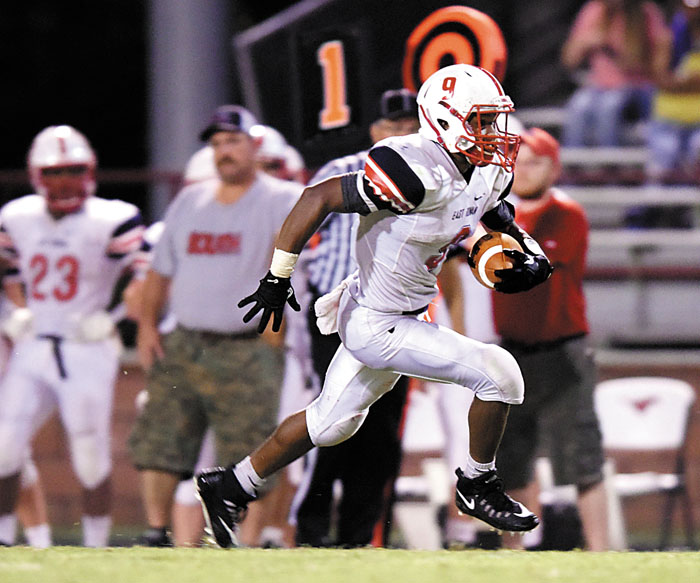 LANDIS — It took less than two minutes for East Rowan to wear out its welcome Monday night.

The Mustangs used the first of six South Rowan turnovers — and first of two pick-six touchdown plays — to open the scoring in a 41-8 stroll past the host Raiders.

“It was a jump start to the game,” defensive back Gabe Hinceman said after his 55-yard interception return just 1:49 into the game triggered the rout. “It started a fire and we kept feeding it.”

East (2-1) fed it with nearly 400 yards total offense, including a career-best 214 yards rushing from junior running back Sam Wall. Its defense picked off four passes, recovered two fumbles and thwarted a pivotal South opportunity late in the first quarter, when it forced a fumble on fourth-and-goal from inside the 1-yard line.

“We came here to dominate,” said linebacker Christian Bennett. “We were level-headed, focused, humbled and ready to win the game. We were hitting them all night and eventually broke their will.”

South (0-2), playing its first game in 17 days, was led by senior Kory Sellers, who caught four passes for 91 yards and ran for an additional 86. Quarterback Brett Amburn passed for 99 yards but was repeatedly flushed out of his comfort zone in his second varsity start.

“We didn’t have too much positive stuff going on,” said South coach Daniel Yow. “Some kids played hard and some played well. I just hope the fact that we played on a Monday instead of a Friday is what put our kids in a funk. They didn’t want to perform the best they could.”

East had no such problem and won its second straight. Wall spent the night running figure-8’s around South’s porous defense and scored the first of his two touchdowns on a 34-yard burst midway through the opening period. He added his county-leading sixth TD in the third quarter when he took a pitch from quarterback Justin Smith, smashed into the line of scrimmage and then zig-zagged away from traffic on a 16-yard run.

“Sometimes the hole is there, sometimes it’s not,” Wall said. “And sometimes you see something that no one else sees. You just hit it and big plays happen.”

Winning coach John Fitz called Wall a “special player,” and added: “We’ve got a bunch of special players. Tonight was his turn. Most of his yards come from the pitch-back, but when we started running some different plays he got a lot on the dives. He’s got great vision out there.”

East built a 21-2 halftime lead, then extended it when safety Noah Green picked off a pass and raced 25 yards into the end zone early in the third quarter. On South’s next possession, scat-back Marquise Rhyne sprinted 57 yards to East seven, but the drive fizzled when Amburn’s subsequent pass was intercepted by senior Clay Washington.

“It doesn’t matter who you’re playing,” Yow lamented afterward. “You have turnovers and you’re putting yourself behind the eight-ball. Turnovers kill you every time.”

“Yeah, but that’s just normal for us,” Bennett said. “Our defense is always hungry.”

East had the take sign all night and used turnover No. 6 to cement the outcome. Smith guided the Mustangs 93 yards on eight plays, capped by Wall’s score that provided a 34-2 lead with 4:19 remaining in the third period. The teams swapped fourth-quarter scores — East’s Vincent Jones scored early and South’s Sellers scored late — ending a battle of teams headed in opposite directions.

“If we keep working as a team, this shouldn’t be the end of it,” Wall said. “We’re not dependent on one person because one person can’t do it all. That’s why it’s called a football team.”

NOTES: South had a number of big plays — Sellers’ 70-yard run in the first quarter, lineman Andrew Byrd’s 31-yard pickup on a wildcat play and Rhyne’s long scamper in the third. Amburn threw a 20-yard touchdown pass, his second of the season, with less than a minute remaining. … East’s Tajh Young had an interception late in the first half. Teammates Jihad Williams and Devon Cherry recovered first-half fumbles. … South opens its CCC season Friday at East Davidson. East travels to Central Cabarrus for a non-conference face-off with former coach Kenneth McClamrock.