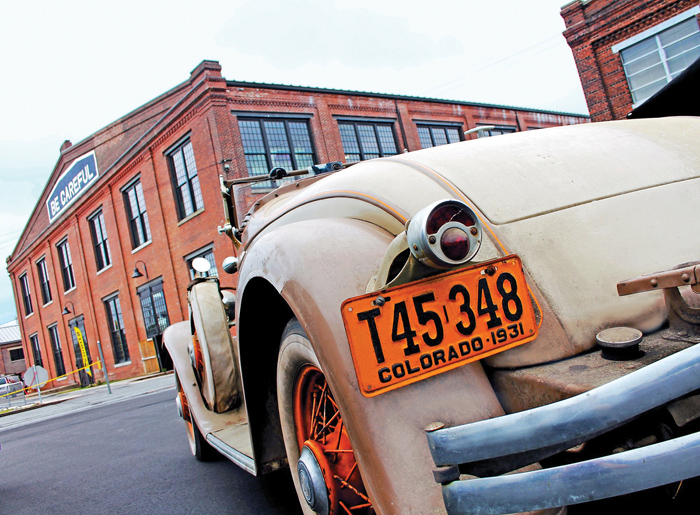 The N.C. Transportation Museum has added five impressive 1930s-era vehicles to its automotive collection. A transportation enthusiast from Georgia donated the cars and pickup trucks that arrived in Spencer last week, including luxury cars like the 1935 Packard Super Eight and the 1933 Rolls Royce 20/25, a rare 1931 Chrysler Roadster convertible coupe, and the blue-collar 1930 Ford Model A Huckster Depot Hack and 1936 International Harvester pickup truck.

Each vehicle is in working order and will be featured moving about the site. “The donor of these automobiles made it clear that he wants these vehicles to be used, not simply put on display to be viewed. Our hope is that we can include them during events, and even as part of our daily offerings in the long term,” said N.C. Transportation Museum Executive Director Kelly Alexander.

Having been produced in the Depression-era 1930s, the vehicles tell the story of a retreat from the excesses of the “Roaring 20s.” However, they also show that advances in automotive engineering and luxury car design continued even during dire economic times.

As the nation became mired in the Great Depression, Packard responded with more subdued versions of its luxury vehicles.  The 1935 Super Eight featured an eight-cylinder engine, rather than the company’s previous 12-cylinder powerhouses, while still offering a larger body and elegant design. While the Twelve was still available in 1935, it was vastly outsold by the more affordable Eights and Super Eights, a sign of tightening belts, even for the most affluent car-buyers.

Similarly, the 1933 Rolls Royce 20/25 was smaller and more affordable than the “Silver Ghost” Phantoms that were so successfully produced by the company during the 1920s. Still featuring luxury options and quality engineering, however, the 20/25 is known as the vehicle that saved the company from the Great Depression.

The 1931 Chrysler Roadster convertible coupe was a continuation of the company’s move toward improved engineering and speed. The 125-horsepower eight-cylinder engine and floating power suspension were firsts for the automaker, showing that even in the most difficult times, Chrysler was still improving its products and producing performance vehicles.

The Model T put the world on wheels in the first decade of the 20th century, and Ford Motor Co. continued that tradition with the Model A in the 1930s. In contrast to the luxurious options from Packard and Rolls Royce, the Model A was designed to fit the needs of blue-collar America. The 1930 Model A Huckster Depot Hack featured a large cargo area at the rear, allowing for a number of uses. In 1930, 3 million Model As had been sold in just three years of production.

A company best known for producing tractors, International Harvester, was also a manufacturer of pickup trucks. The farm-ready 1936 model was made for negotiating poor road conditions, featuring high ground clearance, with a dependable 15-horsepower engine. While utility was primary, the International Harvester design still rivaled many passenger cars of the day.

The N.C. Transportation Museum currently has all five donated vehicles displayed in the newly opened Back Shop, with plans to have them moving about the property soon.

The N.C. Transportation Museum, located in historic Spencer Shops, the former Southern Railway steam locomotive repair facility, is home to the largest remaining operational roundhouse in North America, and numerous structures that represent what was once Southern Railway’s largest steam locomotive repair facility in the southeast. The museum is part of the Division of Historic Sites and the N.C. Department of Cultural Resources. Learn more atwww.nctrans.org.