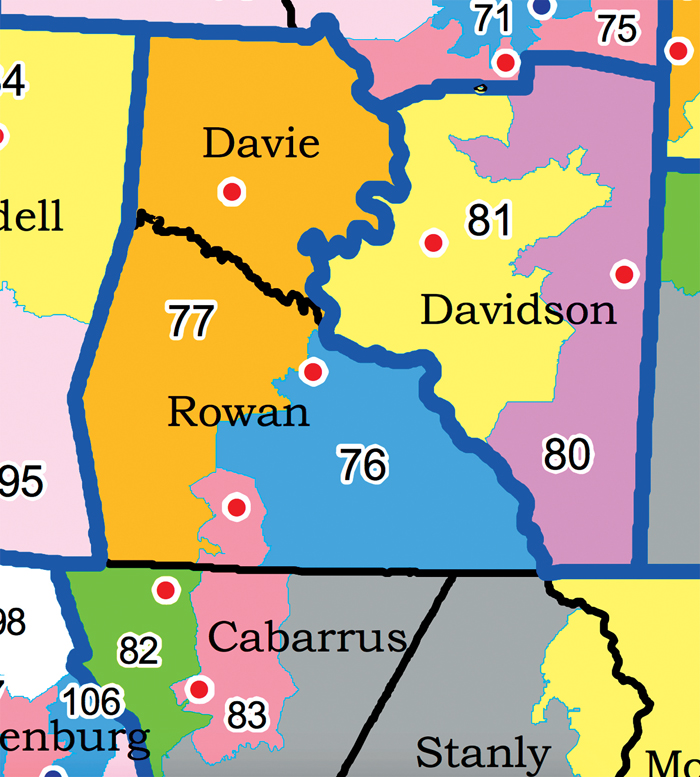 SALISBURY — Rowan County could increase its presence in the N.C. General Assembly if recently redrawn maps hold up in court, said two of the area’s four legislators.

Currently, four state legislators represent parts of Rowan in either the House or Senate, but only two of that group live in the county. Under maps approved last week, it’s possible that four local residents could be state legislators — three representatives and one senator — said Reps. Carl Ford, R-76, and Harry Warren, R-77.

“While it may look like we’re fragmented politically, we could have three members of the House,” Warren said. “That’s solid representation.”

The new maps pair Rowan and Stanly counties to create a district without an incumbent. Warren said a good candidate “would have the odds in their favor” in a bid for the new Senate seat.

In one scenario, where three representatives and a senator all live in Rowan County, locals could lobby more effectively for local projects, Ford said.

“I think, overall, it could end up being better for us than what we’ve had in the past,” Ford said.

The 34th District covers a majority of the county, while the 25th includes southeastern Rowan, Rockwell, Bostian Heights and China Grove.

Most local voters will either have a new representative or move into a new district as a result of the redrawn maps.

Warren says he plans to run for another term in the General Assembly in his new district.

Meanwhile, most voters in west Rowan would stay in the 77th District but have a new representative.

If she runs for and wins another term, Rep. Julia Howard of Davie County would be the 77th District representative. Howard currently represents the 79th District.

The new maps move Ford to a new district — the 83rd. It contains parts of China Grove, Landis and Kannapolis. The district also includes parts of Concord.

In the new maps, Ford is also doubled-bunked — placed in the same district — with Rep. Larry Pittman, a Republican from Concord. That leaves Ford with a decision — run against another Republican, run for a different office or don’t run at all.

He could run for the newly drawn N.C. Senate seat that covers Rowan and Stanly County. As drawn, the district doesn’t have an incumbent within its boundaries.

At the end of 2018, Rowan County will no longer be represented by Sen. Tom McInnis, a Republican from Richmond County. McInnis currently represents the 25th District in the N.C. Senate. In the new maps, the 25th District moves out of Rowan and Stanly counties and into Moore County.

Asked about the change, McInnis said he’s saddened because he’s made a lot of friends in Rowan and Stanly counties. He stressed that regardless of areas his future district might include he would be Rowan County’s senator until the end of 2018.

McInnis said he plans to run for another term in the N.C. General Assembly.

Sen. Dan Barrett, recently appointed to the 34th District seat, will also not represent Rowan county after 2018. The new maps move Barrett’s current district out of the county and double-bunk him with another Republican. Like Ford, Barrett hasn’t announced what he’ll do in 2018.

Regardless of future plans, maps passed last week are not necessarily the ones that will be used for 2018 elections. Federal judges must still give their approval. Complicating matters further, judges could also order a special election instead of waiting until 2018.

When asked, all local legislators said they’re not sure what will happen in court. Warren said there are too many potential scenarios to pick one. McInnis and Ford both said the decision is “above my pay grade.”