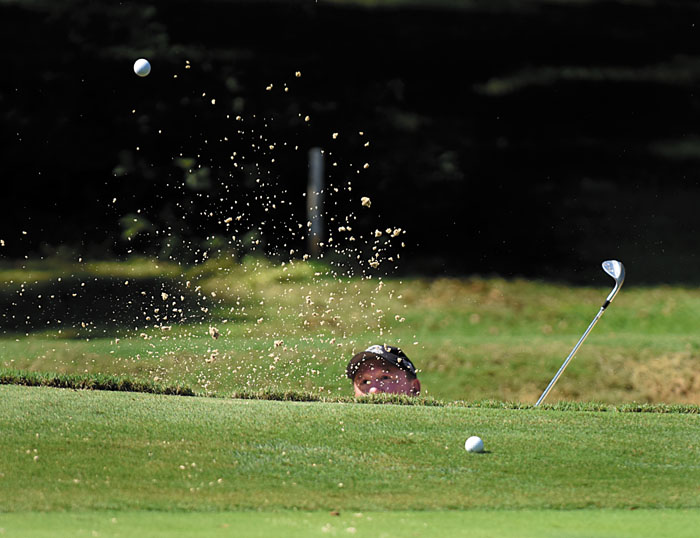 Wayne Hinshaw / for the Salisbury Post Joey Boley blasts out of a sandtrap on hole No. 8 in the Crowder/Dorsett Labor Day Golf Tournament Day 2 on Sunday. The ball on the green to the right is not his.

SALISBURY — Exhausted. That’s the only word to describe golfers Keith Dorsett and Ryan Honeycutt after their six-hour, quarterfinal victory Sunday in the Labor Day 4-Ball tournament at the Country Club of Salisbury.

The 15th-seeded pair advanced to this morning’s semifinal round when Dorsett birdied the 21st and 22nd holes, securing a 1-up decision over 10th-seeded Thad and Bryson Sprinkle.

“We never had the lead until 22,” Honeycutt said after he and Dorsett combined for nine birdies. “We were 8-under par for the day and they were 7-under. Believe me, we’re tired.”

Dorsett and Honeycutt will tee off against 14th seed Lee Frick and Blake Wray at 8 a.m. The other semifinal pairs surprise winners Tyler Mulkey and Jordan Taylor against teenagers Charlie Barr and Michael Childress. The winners meet for the club’s 65th championship at 1 p.m.

“When we qualified (for the championship flight) and snuck in at 15, I knew we had a chance,” Dorsett said. “That’s all we needed. Yesterday was smooth sailing, but this one was tough. We don’t draw pictures of how we want the ball to go. We get it on the green and make putts.”

They nearly secured the match two holes earlier on the par-5 No. 2. Dorsett’s 50-foot putt for birdie could have settled it, but rolled to the lip and hung there. “Needed one more revolution,” Honeycutt said. “He left it dead in the heart. It just stopped short.”

Today’s match with Frick and Wray — 5-and-4 winners over Joey Boley and Richard Cobb — promises to be entertaining. “We’ll have our hands full,” Honeycutt said. “We’ll probably have to be 8-under (par) again.”

Country Club members Frick and Wray were 6-under for 14 holes in their untroubled triumph. They were two holes ahead after nine, then birdied Nos. 10, 11 and 13. It ended when Wray sank a putt for par on 14.

“There’s no key for me and Lee,” Wray said. “We just try to play steady, mistake-free golf. It’s all about fairways and greens and we’ve played this course a thousand times. We’ve had two good days here, 6-under each round. If we do that (today), we’ll have a good shot.”

Eighth-seeded Mulkey and Taylor pulled off the day’s most-confounding upset, ousting top-seeded medalists Jared Barnette and Justin Lefler, 4-and-3. They made three birdies and 12 pars, but played sturdy enough to prevail.

“We made one birdie today,” Barnette explained. “That’s not good enough to win in championship play. Tyler and Jordan, they made pars. We made nothing.”

Mulkey and Taylor were two holes up after five and 3-up at the turn. It was over at 15, where Taylor narrowly missed a 30-footer for eagle and settled for a two-foot birdie putt.

“We just kind of played a consistent round,” he said. “If one of us got in the trouble, the other one was there.”

Mulkey was less enthused after what had to be considered a brand-name victory. “In the championship flight, everybody’s got the same seed,” he said. “Anybody can win. But I’ll tell you this, pars won’t win (today).”

The youngest players in the tournament received the loudest cheers from the gallery. Fourteen-year old Charlie Barr — a freshman at the Cannon School in Concord — and senior classmate Michael Childress rallied from a hole down with three to go for a stunning 1-up win against Clark Alcorn and Alex Nianouris.

“After going one down, I was shaken up,” said Barr, who birdied both the 16th and 17th holes with magnificent shots, then parred the 18th to clinch it. “But it was such a turnaround. I rolled off the two putts and Michael calmed me down. We buddied up really well today.”

Barr and Childress are the fourth seed — making them the betting choice to hoist the championship trophy today. They finished yesterday’s round with a nothing-special scorecard: three birdies and 12 pars.

“Well, we stayed patient and were fortunate,” said Childress, who turned 18 on Aug. 24. “We pieced it together and got around the golf course well. We don’t need to change anything, but I don’t think it’s outlandish to say we haven’t played our best yet.”