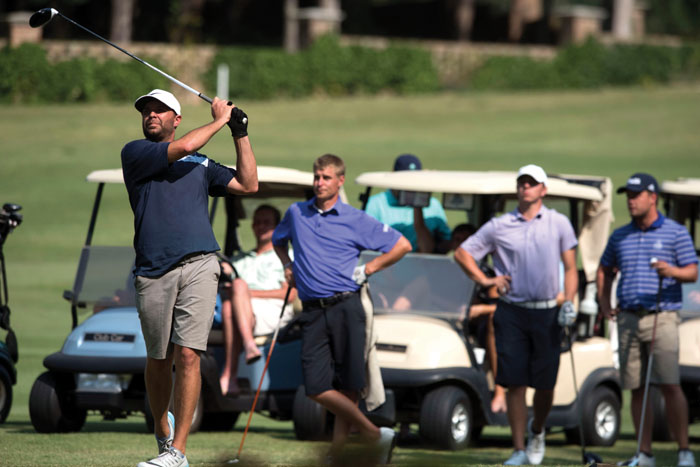 Frick and Wray put together a string of birdies on the front side Monday afternoon to take a two-hole lead at the Country Club of Salisbury, then made it stand up over the final 10 holes to edge Tyler Mulkey and Jordan Taylor, 2&1.

It was the first appearance in the finals of the championship flight for both teams and each responded with stellar sub-par rounds. But Frick and Wray, who were playing as a team for the fifth year in a row, had just a little more down the stretch. Their previous best effort was reaching the semi-finals.

“Honestly, we never dreamed of winning this sucker,” said Frick, 36, of Salisbury. “It just feels good and that is about all I can say.”

Wray, 33, also of Salisbury and a former college golfer at Western Carolina University, said it was a matter of grinding it out through four tough matches in three days. “Today, you play in the morning and then you play in the afternoon,” Wray said. “It’s tough and it takes a lot out of you, so it is just a matter of playing together as best you can.”

For the winners, the long awaited championship was more one of exhausted elation.

The championship match closed out on No. 17, when Frick dropped a 10-foot par putt. For the round, he and Wray posted a 6-under par score with four birdies on the front side and two more on the backside of the par 71 Donald Ross layout. Mulkey and Taylor, both senior golfers at Catawba College, posted a 4-under par round of their own, but it was not enough to close the early gap.

The winners posted three straight birdies on holes 5, 6 and 7, two of them by Wray, to go 2-up. For the next 10 holes, the two teams matched eight pars and two birdies to keep the margin the same.

“After the seventh, we just matched each other on every hole, “ said  Mulkey. “We had a few opportunities to catch them, including a lipped-out birdie on No. 9. But it was just one of those days … some days it falls and some days it just doesn’t.”

It was the first time Mulkey, of Salisbury, and Taylor, of Troy, had played as a team in the event. With graduation looming this spring, Mulkey was unsure what they would do in future Labor Day tournaments. “For the first time playing together, I would say we did pretty good.”

While the finals provided some solid golf, the morning semifinals on Monday provided a lot of drama. Wray drained a 25-foot downhill birdie putt on the 18th hole to give his team a tough, 1-up win over Ryan Honeycutt and Keith Dorsett.

Meanwhile, in the other semifinal, Mulkey and Taylor went 20 holes to oust local teen-aged favorites Michael Childress, 18, and Charlie Barr, 14, the fourth overall seed. Barr was part of the winning team last year with Troy Beaver while Childress was part of the 2014 winning team with Charlie Graeber.

Both Barr and Childress are students and golf team members at The Cannon School in Concord.

In the afternoon championship finals, Frick birdied the first hole to put his team up one, but Taylor birdied the third hole to square the match. Then Wray birdied the fifth and sixth (on another 25-footer) to go one-up and Frick hit it close on seven a dropped a four-footer for birdie for a 2-up lead. It stayed that way for the rest of the afternoon.

“They (Mulkey and Taylor) played great,” Frick stated, “It was just a grind, especially on the back side, but that is how you win matches like this. We just held each other up from one hole to the next.”

The champions definitely plan to return next year to defend their title and seemed more excited by the fact that as the returning winners they do not have to qualify to get into the elite group of top 16 teams. They will be the top seed if they come back to defend their title.

In addition to the championship flight, winners were determined in eight other regular men’s flights, a women’s division (see accompanying story), plus senior men (55-plus) and super senior men (65-plus). For all of the results from the final day in all flights and consolation matches, see the scoreboard section of today’s Salisbury Post on page 2B.