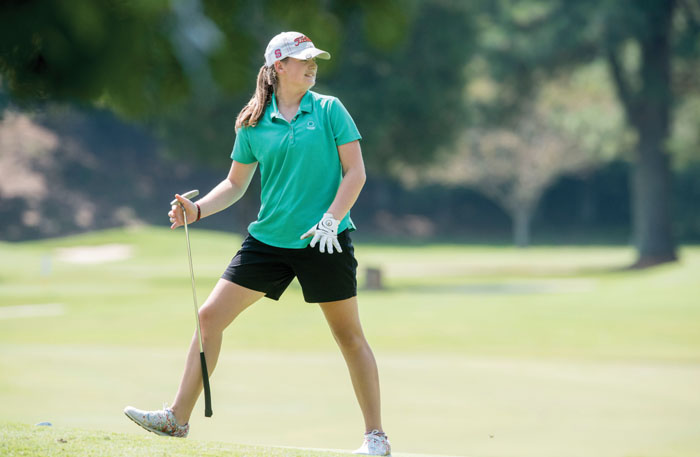 SALISBURY — She did again.

Allison Adams, who has been on the winning team in all seven Crowder-Dorsett Memorial Labor Day 4-ball women’s championships, took matters into her own hands on Monday afternoon at the Country Club of Salisbury.

Adams, playing with Micah Furr, cooly drained a 22-foot par putt on the last hole of her match, shifting the pressure to opponents Kristi Laton and Lucy Martineau.

Both Laton and Martineau had par putts on the No. 9 green, in order to halve the hole and move on to extra holes. However, both narrowly missed and Adams and Furr won their second straight Labor Day title, 1-up.

Adams won the first five women’s competitions with Grace Yatawara and now two with Furr, but the Erwin teacher and mother of two doesn’t have a chance to play much golf — other than the Labor Day tournament.

“I felt like I started hitting it better on the second nine today,” said Adams, who is married to professional golfer Frank Adams III. “It’s a little unnerving to stand over a chip shot when you’ve played two rounds in the past year, as far as confidence-wise. But I hit it better today than I did yesterday.”

Adams’ tee shot on the decisive last hole, the par-3 ninth, was probably the worst of four players, coming up short and right of the green. And her chip shot was not that good either, leaving her 22 feet short, but, at least, under the hole.

“Yeah, I didn’t hit a very good chip shot there,” said Adams. “I’m glad that I gave myself an uphill putt but it was definitely not the distance I wanted. The putt was straight uphill, a little right to left. Just glad I made it. Maybe Starr guided that one into the hole.”

Adams was referring Starr Forney, a fellow teacher at Erwin Middle School and close friend, who died suddenly on Aug. 1. “I thought about her driving over here this morning,” said Adams, who added that Starr was not a golfer. “She had too much of a temper … she would have probably thrown clubs. She was an even-keel person, but golf can make you lose your temper.”

The match, which started on No. 10,  was tight throughout, as Adams and Furr never had more than a one-hole lead. Laton and Martineau had a two-hole advantage after nine holes, but Adams’ birdie on No. 1 and par on No. 2 evened the match.

It was back-and-forth after that. Martineau gave her team a lead on No. 3 with a par, but then Furr made a birdie putt on No. 4 to even things again. Both teams missed chances on No. 5, but Furr’s par putt on the par-3 sixth hole nudged her team ahead again.

The lead didn’t last long. Martineau’s short par putt on No. 7 evened the match again. Both teams bogeyed the par-4 eighth hole, even though both Adams and Furr had poor tee shots. A great third shot from Adams, from off the fairway and between two trees, saved the day. It gave her a 30-footer for par and she got close enough for a bogey, halving the hole.

The women went to No. 9 even and Martineau had the tee shot closest to the hole, though it was just off the green. However, her birdie attempt was too short and her par putt burned the edge of the cup. Laton’s par putt also just missed after her birdie putt went well by the hole.

“I guess I had so much adrenaline going,” said Laton, a perennial finalist but still looking for that first title. “I just wanted to get it close and I just gave it too much, then had 12 feet coming back.

“Just a tough loss — again,” continued Laton. “But, we made it to the finals again and you know, we played some good golf out there all three days. It’s just tough. They (Adams and Furr) played well. That last putt, she made it and won it.”

Furr, last year’s top high school golfer when a senior at Carson, is a freshman at N.C. State now but not a member of the golf team.

“I’ve been practicing in Raleigh, playing on my own, and have been coming back and forth some, practicing for this tournament,” said Furr. “I have not tried out as a walk-on at State, but hope to do so some day. I feel that I’m getting better.”

Furr was once again relieved that she was not part of a team that stopped the Adams’ seven-year, 14-match Labor Day streak.

“It’s a thrill to win again, but there’s a lot of pressure out there,” added Furr. “You don’t want to be the reason Allison loses for the first time in this tournament. I think about that almost every shot out there. The last three holes had me really stressed out.”

While Laton plays every year, it was the first time with Martineau as a teammate. Martineau played well as her par putt on No. 15 and birdie on No. 16 gave the team that two-hole lead at the turn.

“I had a great time out there … just a great three-day tournament, ” said Martineau. “We would have loved to have won and yes, there’s holes you’d like to have back, but you just keep going and try to do your best.”

Laton again looks toward next year. “It’s a draining experience out there,” she said. “It’s tough. Losing last year on the 19th hole and now this time, on the 18th.”