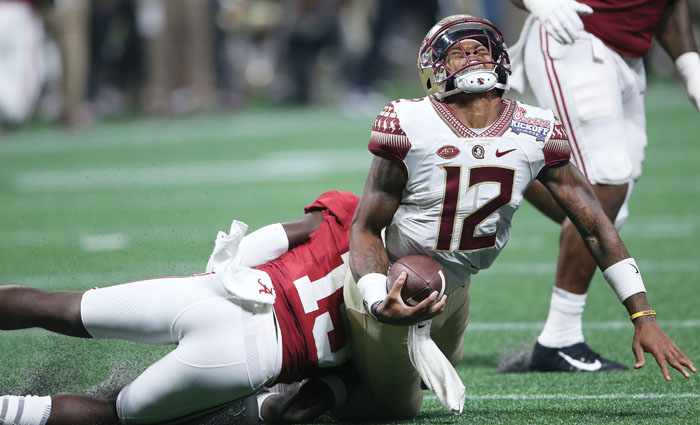 ATLANTA (AP) — The Alabama defense turned in a dominating performance, the Florida State special teams endured a terrible night, and one of the most anticipated opening games in college football history went to the top-ranked Crimson Tide.

Damien Harris ran for a touchdown and blocked a punt, and Jalen Hurts chipped in with a scoring pass on a night that basically required the sophomore quarterback to make no major mistakes, leading Alabama to a 24-7 beatdown of No. 3 Florida State on Saturday at Atlanta’s new $1.5 billion Mercedes-Benz Stadium.

This one was all about that dynamic Bama D.

And those not-to-special teams for the Seminoles.

Alabama picked off a pair of passes by Deondre Francois in the second half, snuffing out any hopes of a Florida State comeback. Throw in a blocked punt, a blocked field goal and a fumble recovery on a kickoff return, and there was really no path to victory for the Seminoles in the first matchup ever between two teams in the top three of The Associated Press preseason rankings.

The Tide led 10-7 at halftime, catching a huge break in the closing seconds when the officials didn’t call a pass interference penalty on Tony Brown while defending Francois’ pass into the end zone for Nyqwan Murray.

Brown never looked for the ball on the play, running into Murray as he tried to go for a scoring catch that would’ve given the Seminoles a lead. When Florida State attempted a 37-yard field goal on the next play, Minkah Fitzpatrick leaped up to make the block on the final play of the half, preserving the edge and prompting a chorus of boos from the FSU faithful as the officials trotted off the field.

Appearing deflated, Florida State never got anything going over the final two quarters. Levi Wallace and Mack Wilson both had interceptions, and Francois’ night ended with him being helped off the field — putting no weight on his left knee — after being sacked from behind by blitzing safety Ronnie Harrison.

Francois immediately grabbed at his knee, and after being treated for several minutes on the turf, he wrapped his arms around a couple of trainers and hobbled off the field.

It was a potentially crushing blow on a night that already went back enough for the Seminoles.

“The defense did a fantastic job, especially in the second half,” Alabama coach Nick Saban said. “Special teams was a big difference. It’s good to get a win, but we have a lot of work to do.”

“We’ll get better,” he added ominously for the rest of the nation.

With the Tide still clinging to that three-point lead, the game was essentially decided by a seven-play sequence toward the end of the third quarter. Backed up in his own territory, Logan Tyler’s punt was smothered by Harris, racing in from the left side, and Dylan Moses fell on it at the Florida State 6.

The Seminoles made an impressive stand, forcing Alabama to settle for Andy Pappanastos’ 25-yard field goal.

It was all for naught when, on the ensuing kickoff, Keith Gavin muffed the ball in the end zone, picked it up, ran into one of his own men, and then fumbled on a hit by Moses. Keith Holcombe recovered at the 11, and Harris ran up the middle for a touchdown on the very next play, splitting two would-be tacklers at the 5.

Florida State managed only 65 yards in the second half and finished with 250 in the game. Alabama had only 269 yards, and missed a pair of field goals, but it didn’t really matter with all the chances created by the defense and special teams.

“This game tells us where we are,” Saban said, “and where we need to go.”

Alabama: The Tide looked very much like a team worthy of its No. 1 ranking. While the no-call on the potential pass interference penalty was a huge break, there was no doubt about the better team in this game. Alabama, which has been a part of the national championship race essentially every year of Saban’s decade-long tenure, figures to be right in the mix again — led, as always, by its defense. The offense still needs a bit of work, especially the passing game.

Florida State: The Seminoles were looking to regain a bit of their swagger after back-to-back 10-3 seasons, which would be a cause for celebration at most schools but not in Tallahassee. Florida State thought it had the squad to contend again for a national title, but the offense was no match for the Crimson Tide and Francois’ injury could be a huge blow. ‘

Alabama: Hosts Fresno State next Saturday in first game of the season at Bryant-Denny Stadium.