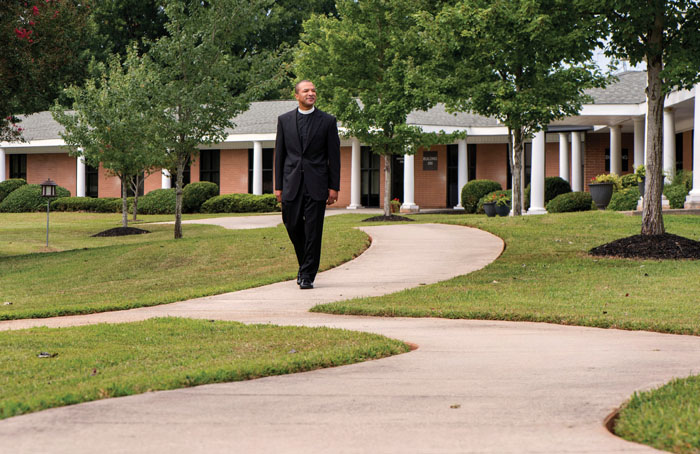 SALISBURY — The green, winding walks of Hood Theological Seminary hold a treasure few realize. In addition to educating and training pastors and ministers, the seminary also turns out chaplains — those on the front lines of ministry, so to speak.

Hood’s on-campus Center for Chaplaincy is, as far as school officials are aware, one-of-a-kind.

“This is to my knowledge, one of the first seminaries in North America to have a Center for Chaplaincy,” Hood President Dr. Virgil Lattimore said.

The center has been up and running for three years — ever since Dr. Ken Walden came on board in 2014— but now it’s beginning to blossom.

“I’m happy to say that in 2017 we have the most students participating in clinical pastoral education and chaplain residents. …We have more right now than in the history of the school,” Walden said.

Walden attributes the growth to a few different factors. One is Lattimore himself, who, in addition to giving Walden free rein to found the center, also served as a chaplain himself for many years in the Air Force Reserves, and eventually for the Pentagon. And Walden himself served as a chaplain in the Air Force Reserves for more than 15 years. The other is the center’s launch and strategic recruitment and promotion by the school.

And a recent $50,000 grant from the Association of Theological Schools means that the Center for Chaplaincy may soon enter a new era of growth — this time reaching out into the community.

For Walden and Lattimore, the grant meant that they were doing something right.

“That was a huge financial affirmation,” Walden said.

The Association of Theological Schools awarded nine grants, with recipients chosen from its roughly 240 members.

“I think it’s a wonderful tribute to Hood that the association . . . choose to give us a grant,” Lattimore said.

While the center exists to educate and equip students exploring a career in chaplaincy, Walden and Lattimore also hope that it will be a place where community members can come to learn more about chaplaincy, where current chaplains can receive continuing education and where the seminary could host workshops and guest speakers.

“This is a unique thing for a seminary,” Lattimore said of the center.

“That number is more than it’s ever been since I’ve been here,” Lattimore said.

It’s a profession that offers budding ministers a steady paycheck in a time of declining congregations. Many churches, Walden explained, are no longer able to provide a full-time salary to pastoral leaders.

“So with the financial realities, clergy people and faith leadership they are having to look in alternative directions for their livelihood,” he said.

For many, that alternative direction is chaplaincy. Hood hopes to prepare future chaplains for the realities they’ll face. Grant funds will be used to bring experienced speakers on board, to host workshops and lectures, to provide travel stipends for chaplaincy students and to fund educational resources and research.

“We want to wed student pastors with those professionals,” Lattimore said of possible speakers at the center.

Hood is currently renovating a building to serve as the Center for Chaplaincy’s hub. Once it’s finished, Lattimore and Walden hope it will be a place to educate the public about their rights to a chaplain.

“I think some lay people do not realize if they become a patient, or if they have a loved one as a patient . . . they have the right to call that hospital and ask the chaplain to visit his or her loved one,” Walden said. “. . . So having the Center for Chaplaincy really provides another level of care that people might not know exists.”

Chaplains are ministers who serve in hospitals, colleges, businesses, the military and other areas to listen and guide people spiritually. But in many ways, chaplaincy is fundamentally different from pastoral care. For one, it’s a wider world.

But people often need spiritual support and guidance outside of the walls of a church — particularly if they are dealing with stress or tragedy.

“We’re mind, body and soul. And our spiritual lives often impact our physical lives and other components of our lives — one would argue almost every component of our lives,” Walden said.

And that impact can be felt in everything from a college student’s test scores to how quickly patients recover while in the hospital.

“There are other factors in a hospital room that’s far beyond medication and machines that will impact the person,” Walden said.

A chaplain is someone who, above all, listens. Often — particularly in hospitals — a doctor or nurse may not have the time, or interest, to hear an individual patient’s spiritual or religious concerns. In colleges, professors or parents may not listen to a student’s hopes and worries without dictating “about who they should be or what they should do.” But a chaplain can give hope and acknowledgement — regardless of who they serve.

“You will often meet people who do not think like you, who do not look like you and who do not believe as you,” Walden said. “. . . When you’re a chaplain at a hospital, you may open the door and the patient may be Christian, may be Jewish, may be Muslim, may be Hindu, may be Sikh — but you’re still their chaplain.”

In addition to serving in hospitals and schools, chaplains are often used to debrief first responders after tragedy strikes.

According to Lattimore, chaplains “meet people at their point of need.” They have respect for whatever someone is going through, and are willing to sit and listen. They can hear a person’s story, but not be overwhelmed by it.

“I’m now going to be someone who won’t judge them or reject them — I’m going to be a companion, a spiritual companion,” Lattimore said.

Chaplaincy presents an opportunity to meet different people, and to hear different stories. It’s a field that Hood hopes many will choose to explore.

For more information on the Center for Chaplaincy, visit www.hoodseminary.edu/initatives/center-for-chaplaincy or call 704-636-7611.