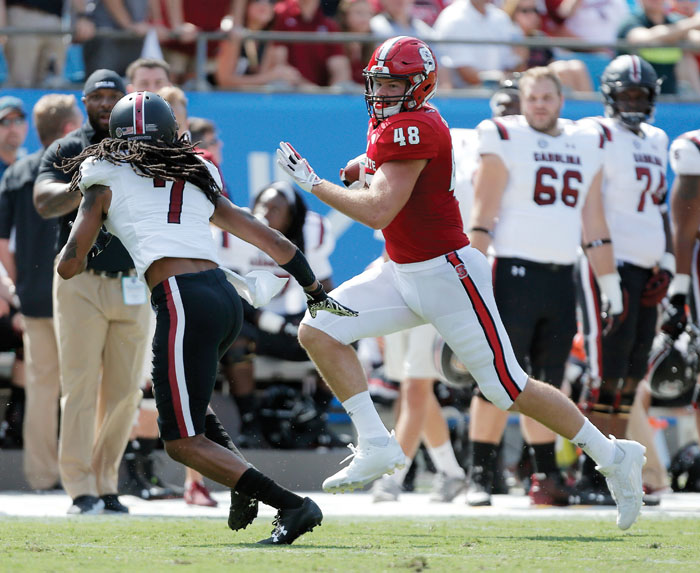 North Carolina State's Cole Cook (48) looks to get by South Carolina's JaMarcus King (7) who stops Cook before he could score during the first half of an NCAA college football game in Charlotte, N.C., Saturday, Sept. 2, 2017. (AP Photo/Bob Leverone)

CHARLOTTE (AP) — When Gamecocks quarterback Jake Bentley rolled out of the pocket and heaved a ball downfield in the direction of a streaking Deebo Samuel he had complete faith his favorite target was going to haul it in.

“If he would have dropped that pass in the end zone I might have killed him,” Bentley said with a laugh.

He didn’t drop it.

Instead, Samuel reached out and snared the ball with one hand in the corner of the end zone for a 39-yard touchdown reception, giving South Carolina the lead and propelling them to a 35-28 victory over North Carolina State in the season opener for both teams.

Samuel returned the opening kickoff 97 yards for a score and caught two touchdown passes from Bentley in an impressive victory over a Wolfpack team that started the season five spots outside of the Top 25.

“He probably won’t say it, but I don’t think anyone in the country can guard him,” Bentley said of Samuel.

Deebo, what do you think?

“No comment,” he said with a smile as the press room erupted in laughter.

Samuel may not be much of a talker, but he certainly can play.

He finished with five catches for 83 yards and his kickoff return set the tone for the game. North Carolina State pulled even three times, but could never grab the lead.

“We work on scramble drills every other day in practice and when he rolled out I kept running,” Samuel said. “When I see the ball coming I knew I had to make a play.”

Bentley threw for 215 yards and three touchdowns, including strikes of 39 and 6 yards to Samuel as the Gamecocks won their 17th season opener in the last 18 years.

Gamecocks safety D.J. Smith broke up a pass from Ryan Finley in the end zone on fourth and goal with six seconds left to preserve the win.

Finley threw for 415 yards and two touchdowns on 45-of-64 passing for North Carolina State. Jaylen Samuels had 15 catches for 85 yards and a touchdown and Kelvin Harmon had 10 for 114 yards for the Wolfpack.

But the Gamecocks scored 14 points off two North Carolina State turnovers, which turned out to be the difference in the game.

“Turnovers is a skillset we work on every day and he will have to look at as a staff how we’re coaching it,” Doeren said.

The biggest came in the third quarter right after Samuel’s touchdown catch.

South Carolina defensive end Dante Sawyer came crashing through the line and sacked Finley, stripping him of the ball. Bryson Allen-Williams hopped on the loose ball at the Wolfpack 13.

South Carolina: Bentley has been touted by some as a NFL-level quarterback and he displayed that promise on Saturday with some precise passes, none better than the 39-yard strike to Samuel. It was a huge win for a team that was a combined 16-22 over the past three seasons but finished strong last year to make a bowl game.

“This sets the tone for the season,” Bentley said.

NC State: Entered the season with high hopes after returning 18 starters from last year, including 11 seniors — the highest number in at least a quarter-century. So this was a huge setback for a program looking to take the next step with a statement win. Two of the biggest concerns have to be the lack of a running game.

THE GREAT START: Samuel got the season started in style for South Carolina, taking the opening kickoff and bouncing to the outside and racing up the field. Only one player touched him as he turned on the afterburners and outran the field.

STAT GAME: South Carolina won despite being limited to 31 yards rushing on 21 carries and being outgained 504-246.

SUSPENSION: Wolfpack coach Dave Doeren said offensive tackle Will Richardson was suspended for the first two games of the season for a violation of team rules. He said it stems from an undisclosed incident that occurred back in the spring.

South Carolina: Will travel next Saturday to face Missouri, which defeated Missouri State 72-43 in the season opener.