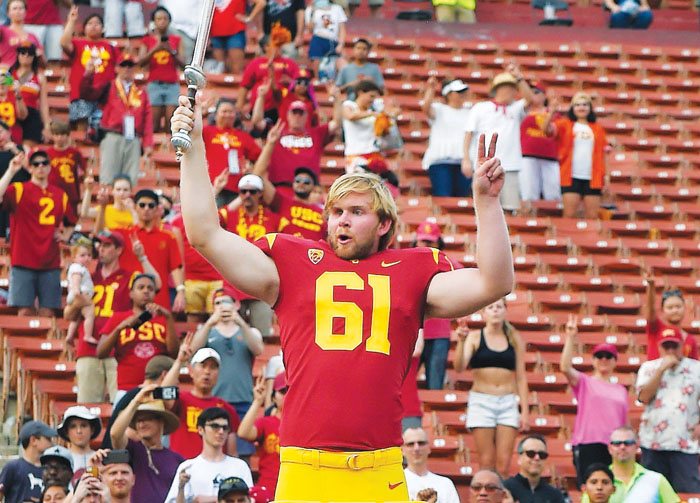 By GREG BEACHAM, AP Sports Writer
LOS ANGELES (AP) — Jake Olson first imagined this moment long before he lost his vision to cancer eight years ago.
Southern California scored a touchdown. Coach Clay Helton turned to the sideline and yelled his name: “Are you ready? Let’s get this done!”
The blind long snapper’s teammates guided him onto the field. They lined him up over the ball. The referee blew the whistle.
And Olson’s snap between his legs was straight and true.
“It turned out to be a beautiful moment,” Olson said.
Olson delivered a flawless extra-point snap for the final point in No. 4 USC’s 49-31 victory over Western Michigan on Saturday.
Although a rare form of retinal cancer took his sight as a child, Olson simply refused to give up on his dream of playing for his beloved Trojans. After years of dedication to football and two seasons of practice, Olson’s dream abruptly came true in USC’s season opener.
Olson got his snap to holder Wyatt Schmidt with 3:13 to play, and the ensuing kick set off a wild celebration for teammates and fans in awe of an indelible moment for an unstoppable athlete.
“I just loved being out there,” Olson said. “It was an awesome feeling, something that I’ll remember forever. Getting to snap at USC as a football player … I’m trying to say as much as I can, because I can’t quite believe it yet.”
Olson’s snap was the culmination of years of dedication to a seemingly crazy dream. The 20-year-old junior has been around the USC football program since 2009 thanks to former coach Pete Carroll, who first heard about Olson’s cancer and his love for the Trojans.
Olson lost his left eye when he was 10 months old. The cancer forced doctors to remove his right eye when he was 12 — and he asked to watch the Trojans’ practice on the night before his surgery.
“To take a situation that ugly, and then to fast-forward eight years and to have that same kid be able to snap on the football field with the team that really got him through that time, is just beautiful,” Olson said. “It’s emotional. Incredible.”
Although he is completely blind, Olson managed to play two years of high school football in his native Orange County. He has worked out with the Trojans since 2015, enrolling at the school with a scholarship for physically challenged athletes and gradually persuading his USC coaches and teammates that his dream was far more than just a stunt.
Helton vowed to get Olson into a blowout game against an opponent that would agree not to do anything that might injure the long-snapper. Western Michigan had no problem after the Trojans’ final TD essentially put the game out of reach.
The score was close for most of a scorching afternoon at the Coliseum, so Olson’s parents, Brian and Cindy, didn’t think today would be the day — until suddenly, it was.
“I was just screaming,” Cindy Olson said. “I was jumping up and down. We had everybody around us, even people we didn’t know, just screaming. I was saying, ‘That’s my son!’ Are you kidding? This was history. This was amazing. This was Jake’s dream.”
Olson takes his role with the Trojans very seriously: He has gained 40 pounds of muscle in two years since joining the team, and he is noticeably brawnier this year. Schmidt is his constant companion, guiding him to the proper spots on the field during practice.
“Jake has worked his butt off ever since he got here,” quarterback Sam Darnold said. “It’s awesome to see him finally get a chance.”
Helton also said this moment wasn’t a one-time event: Olson will snap again for the Trojans whenever the proper situation arises in a game.
Carroll allowed Olson to lead the USC band after a game when he first became a part of the program eight years ago. Olson did it again Saturday, climbing the ladder and holding aloft the sword traditionally used to lead the band — but he did it in his game uniform.
“This has all come full circle,” Cindy Olson said. “Isn’t that cool? I don’t think I’ll be able to sleep tonight.”
___
More AP college football: www.collegefootball.ap.org and www.twitter.com/AP_Top25