Bible & Ballroom: WRHS teacher also has a love of dancing 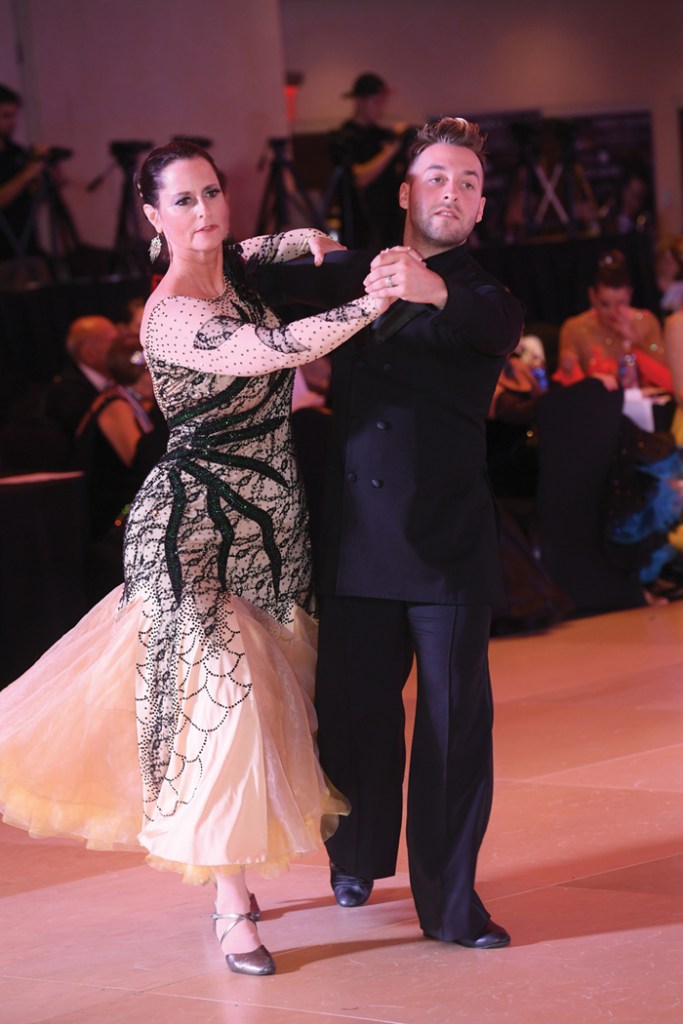 Sara Reeder doesn’t wear glasses. That’s a shame, because you can just imagine her whipping off her glasses, hitting the dance floor after a day in the classroom. She is a Bible teacher by day, and ballroom dancer by night. That’s a pretty sweet gig, wouldn’t you say?

About three years ago, Sara was shopping for a refrigerator in Cornelius. She happened to stop by a Planet Ballroom, which on that day was offering a newcomer’s class. After 45 minutes, she was hooked. She paid a monthly fee which included one private lesson a week and unlimited group lessons.

“I liked it so much I upped the private lessons to twice a week,” says Sara, who teaches Bible History at West Rowan Middle School. This is an elective which students may choose to take.

She started appearing in showcases in October 2015, dancing in Charleston, and going to Charlotte in February 2016. From there, she decided to compete, and worked the whole summer of 2016 with Planet Ballroom and danced in one of their competitions.

Lisaney Kong is her main instructor, and the two of them decided to do “something big.”

That “something big” was competing in August in New York City, in the Empire Dance Championship in Manhattan, which featured some 7,000 dancers from pre-teen to seniors, over four days.

“It’s all ages,” Sara notes. “Some of those young kids are absolutely phenomenal.”

Sara competed in the American Rhythm dance category, in which she and her partner danced the rumba, cha-cha, mambo, swing, and bolero in heats throughout the day. Another day, she and instructor Richard Beaver competed in the American Smooth dance category, in which they danced the slow waltz, foxtrot, tango and Viennese waltz.

“It’s an endurance thing,” she explains. “At the end of the day, you have the championship.”

She didn’t get a medal, she says, but she didn’t come in last, either.

Sara has long enjoyed watching ballroom dancing on PBS, and professional dancers from Europe and Canada came for the competition, she says.

When she was growing up in Minnesota, Sara took tap, jazz and ballet lessons. She and her husband, Michael, married about 30 years ago, and moved to Salisbury, where he and brother Steve own Custom Glass Products on Harrison Road.

The Reeders have two sons, Adam, 18, who works with his family, and Samuel, 21, a senior at Catawba College.

Sara, 53, has no plans to hang up her dancing shoes anytime soon.

“It’s something you can do your entire life,” she says. “There’s no age limit to ballroom dancing. You get a big bang for your buck as far as lifelong learning. I work out to maintain my endurance, and it’s improved by posture and balance — all those things you start losing when you get older.”

She adds, “You use all your muscles. If your body doesn’t hurt while you’re dancing, you’re not doing it right.”

And, she says, you meet a new group of friends. “You don’t do it in isolation. There’s always somewhere to go. It’s just a great way to extend your social life. And you look good at wedding receptions!”

She often attends dances in Lake Norman and Charlotte.

“I go by myself, but I know a lot of people who are there,” she says. “It’s not like clubbing. People are polite and all very friendly. It’s great. Ballroom dancing teaches boys and girls how to relate to each other in a polite way.”

Sara says that Michael is not a dancer.

“It’s my thing and he is so generous to allow me the time to dance,” she says. “Fishing is his focus.”

Together, they enjoy going to the movies, camping and going out to dinner. They also travel, and from New York, they went onto Iceland for Adam’s yo-yo competition (more on that in another article).

Sara says she wasn’t much of a “girly girl” before she started dancing. “Now I am. I do my make-up every day and wear more dresses. For competition, I wear this glitter eye shadow and these huge, honking false eye lashes. I wear hair extensions and a ponytail. It’s over the top, but it’s a lovely experience all the way around.”

Sara has enjoyed downhill skiing, and competed in dressage and jumping (equestrian events), but says that dancing really got her out of her shell. She continues to take lessons at Dynamic Ballroom in Cornelius with J.P. Hipsky and the Ballroom at Quail Hollow at South Park with Steven Freinstein.

When Sara and her family were in Iceland, she heard swing music one night coming out of a club. She quickly went back to the hotel and put on her dancing shoes.

“I was dancing with people from all over the world,” she says. “There were people I danced with who spoke no English.”

No matter. Dance has its own language.

Local girl has opportunity to become a real fashion…