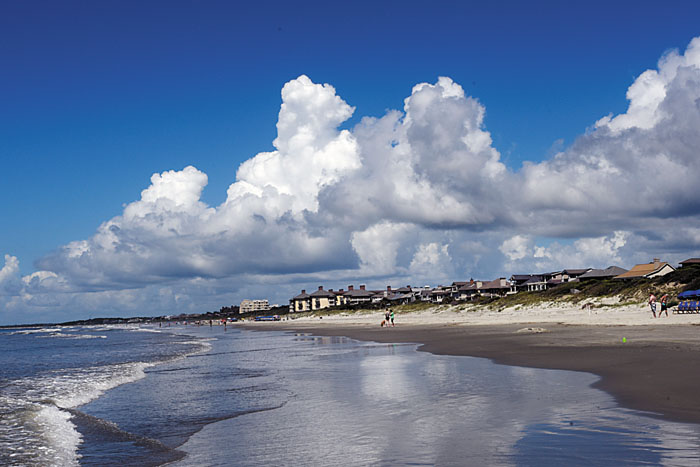 Under the bright sun of morning, the Kiawah Island, S.C., beach is equally beautiful with the white fluffy clouds parting to let the rich blueness of the sky reflect it colors in the breaking waves of the surf. Wayne Hinshaw/For the Salisbury Post

With the opening of schools, the start of fall athletic events, even the horrible storm damage and flood that struck Texas, plus the ongoing shootings and murders here in Salisbury, take a moment and relax and rest your mind from all the things in your life that are stressful and painful.

Maybe you had a great vacation this summer or a wonderful day at Dan Nicholas Park that brought you great pleasure and lasting memories.

As I have written before, I had a wonderful week on Kiawah Island, South Carolina, this summer with all of my family at our annual gathering.

While on the island, I read an article on its history by Christina Rae Butler. In her writings, she stated that in 1670, 148 Englishmen arrived in what is now South Carolina to establish a permanent settlement. Native Americans living along the coast at that time numbered 2,000 from 19 different tribes. The chieftain of the Keyawah tribe (the spelling can be Kiawah, Kiawah, kiawha or keywaha) welcomed the Englishmen and helped them establish CharlesTown on the Ashley River. The settlement was to become the city of Charleston.

The Kiawah Indians were farmers, hunters and fishermen along the coast.

Butler goes on to describe the people who tended their crops in fields scattered around in the area as being women who wore robes made from moss with necklaces of colorful beads. Most of the men wore simple deerskin clothes. The Kiawah natives helped clear the land and suggested the site for the English settlement.

The hostile native tribes from the western part of South Carolina were known to be cannibals and were hostile to the Kiawah tribe. The Englishmen helped defend the local tribesmen.

With the coming of outsiders, the Kiawah people began to diminish in numbers as they contracted new diseases such as smallpox. All the coastal tribes grew smaller in numbers until in 1675, the Kiawah people traded their land on the Ashley River to the settlers for cloth and other goods. Eventually, the tribe disappeared.

Why write about the Kiawah tribe that became extinct in the late 1600s?

It is hard to visit a place and not wonder about the people who inhabited it in earlier years. Knowing that Kiawah Island had residents 4,000 to 6,000 years ago and have now become extinct deserves some thought, while I was enjoying the beauty of the island paradise that was once their home.

Walking on the wide beach of gray wet sand at sunset is breathtaking. The orange evening sky had darkening clouds making a colorful canopy for walkers.

The saltwater reflected the colors of the sky and the blue cooling colors of the coming darkness. The outline of the water’s edge zig-zagged in and out on the beach like the running path of an All-American football running back dodging tacklers.

In the morning, the bright sun over the beach created an equally beautiful scene with the white fluffy clouds parting to let the rich blueness of the sky reflect its colors on the breaking waves of the surf. Blue skies, white clouds, the blue reflected ocean water were outlined by the gray wet sand, making a memorable photo.

A lone reader sat with her book enjoying the sunshine in the quietness of the moment, disturbed only by the breaking ocean waves 30 yards in the distance.

Out at sea, shrimp boat operator is fishing under the approaching, heavy black cloud of a thunderstorm. It is sure to make the water rough.

Behind the sea wall of sand dunes, million-dollar homes line the beach. The homes look like they are hiding behind the dunes from viewers like me. Nice lush green gardens frame the fairways of a golf course.

Take a moment to relax and rest your mind from all the things that are stressful at this time of the year.