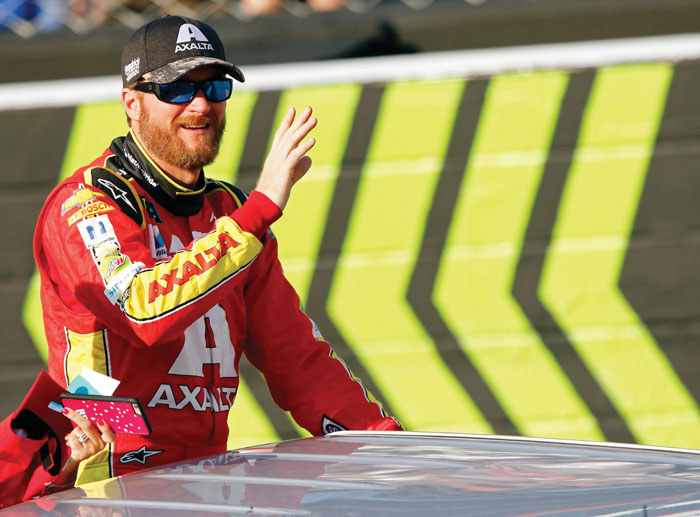 Dale Earnhardt Jr. waves to fans as he makes his way around the track at Bristol Motor Speedway before the NASCAR Cup Series auto race, Saturday, Aug. 19, 2017 in Bristol, Tenn. (AP Photo/Wade Payne)

The sport celebrates and honors its history at its oldest superspeedway, leading up to the Southern 500 on Sunday night.

Race cars sported old, beloved paint schemes, NASCAR Hall of Famers mixed with current drivers and Darlington rechristened one of its suite towers in the names of the late Dale Earnhardt and the retiring Dale Earnhardt Jr.

“We’re all about honoring the legends and heroes of our sport,” Darlington president Kerry Tharp said.

And sometimes, remembering some notable dustups that are among the sports’ richest and most beloved moments.

As Elliott Sadler spoke to reporters NASCAR great Donnie Allison wandered in. Sadler, who’ll sport a back-in-the-day look run by Allison’s rival Cale Yarborough, asked Allison not to come up and take a swing at him as Allison did to Yarborough in their famous Daytona 500 fight in 1979.

“Just don’t say anything smart and I won’t,” Allison shot back with a smile

Don’t be surprised to see some drivers getting hot under the helmet this weekend on a track known for tight corners and flaring tempers.

“I expect it to be hot, humid and nasty,” seven-time NASCAR champion Jimmie Johnson said. “That’s what the Southern 500 has always been about.”

Between the costumes and the retro color schemes — even the Goodyear tires will have old-school lettering — there are several on-track issues to sort out. Winless drivers have only this week and next at Richmond to lock in a spot in the 16-driver Monster Energy NASCAR Cup Series playoffs. There are 13 racers locked in through wins this season, led by points leader Martin Truex Jr. with four. That doesn’t count Joey Logano, who won at Richmond but failed inspection so the victory is wiped out regarding playoff eligibility.

Truex is seeking his second straight Southern 500 and his ninth victory in two years with Denver-based Furniture Row Racing.

“For sure, we’ve had confidence all year, but you have to be careful,” Truex said. “At a place like Darlington, it can get you in trouble. We come every week with an open mind knowing it’s going to be a challenge.”

Those without victories including Earnhardt Jr., who is making his last appearance as a regular driver at Darlington. Dale Sr. was among the best to ever run at the track “Too Tough To Tame,” with nine victories — second to the 10 of NASCAR Hall of Famer David Pearson.

Dale Jr. is winless at Darlington in both the Monster Energy and Xfinity series since his first race here in 1998. His best showing was a second in 2014. It might be hard to find that elusive victory this week either since Earnhardt has struggled much of his farewell season.

He was heartened by the large white “Earnhardt Towers” sign has he cruised through turn three during NASCAR practice.

Earnhardt said his father would be “incredibly proud” of the re-named building. “I love when anything happens to get people to take a moment to remember him, recognize him, honor him,” he said. “That was one of the first things I thought of when he passed away (in 2001) was that nobody ever forgets who this man was. Darlington and the sport does a really good job making sure that’s not going to happen.”

A day earlier, Darlington dedicated three luxury seating areas to one of Earnhardt Jr.’s former teammates, Jeff Gordon, the four-time champion who retired two years ago, although he drove at Darlington last summer for an injured Dale Jr. Gordon was on hand to cut the ribbon on the “Jeff Gordon Finish Line Terrace,” plush box seating in the main grandstand.

Gordon was honored to see a montage of his Darlington highlights — he won seven times including six Southern 500s — on the wall by the seats. He said NASCAR’s emphasis on the past has re-vitalized a Darlington track that seemed headed for the junk pile with other smallish, defunct tracks from NASCAR’s past like North Carolina spots in North Wilkesboro and Rockingham.

“Small markets like this, we’ve seen them go away,” Gordon said. “But this place has so much history, Darlington can’t go away.”