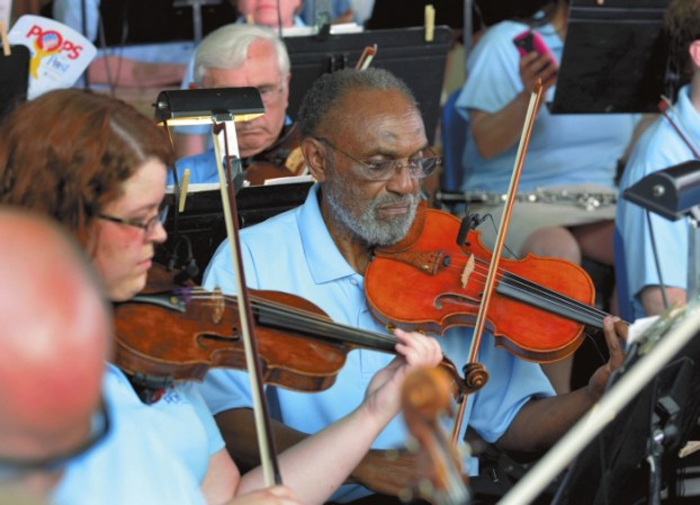 EAST SPENCER — Starting Sept. 26, residents of East Spencer will have the opportunity to make a little music.

The Salisbury Symphony has partnered with town officials to launch a 12-week “learn to play violin” pilot program that is free and open to town residents.

The move is part of new symphony Executive Director James Harvey’s desire to turn Rowan County into “a beacon for the arts.”

Harvey said it’s his dream that the symphony become a countywide organization and for Rowan County to be a place where everyone appreciates the arts.

For that to happen, Harvey said, “we will need every corner, every nook and cranny of Rowan County to be imbibed with the arts.”

For Harvey, the partnership with East Spencer is a step in the right direction — and one he hopes other community arts groups will follow. It’s his hope that music and the arts will regenerate communities like East Spencer.

And it’s one way the symphony can have a positive influence in Rowan County.

“Everybody’s got to do their bit, and this is our bit,” Harvey said.

East Spencer was selected as the launch point for a few reasons. For one, Harvey said, East Spencer is one of the most underserved communities in the county.

According to the latest U.S. Census, the median household income in East Spencer hovers around $14,000. The town has few businesses and, until recently, lacked a school and community center.

Harvey said the recent acquisition of a building suitable for a community center is one reason the town was chosen. Mayor Barbara Mallett has marked the building’s auditorium for use for musical functions, and she was happy to partner with the symphony.

“She wanted to do something for the people of East Spencer,” Harvey said.

The program will teach violin to town residents ages 8 and older.

About  20 slots are open, though symphony officials say they hope to add to that number if the pilot program proves successful.

“Our goal is to just hit this community as a whole,” said Lynn Bowes, symphony education director.

Learning to play a musical instrument at any age has concrete benefits, Bowes said, from engaging different areas of the brain, improving coordination and building social skills. Symphony officials also hope that the pilot program will give people a positive way to get involved and create “a community bond in East Spencer through music.”

Classes will be held once a week at 1909 East, the former Rowan-Salisbury Schools administration building on South Long Street.

The pilot program will cost about $3,500 to launch, including the costs of instructors and materials. Harvey estimates that after materials are acquired, each 12-week session should cost only about $2,500 to run.

Harvey said he doesn’t think the symphony would be able to cover another 12-week session. In light of that, the symphony is looking for anyone interested in sponsoring the program — which Harvey hopes will eventually expand to other areas of the county.

“We need some positivity, and we need the arts,” he said.

East Spencer residents must register for violin instruction, as space is limited.