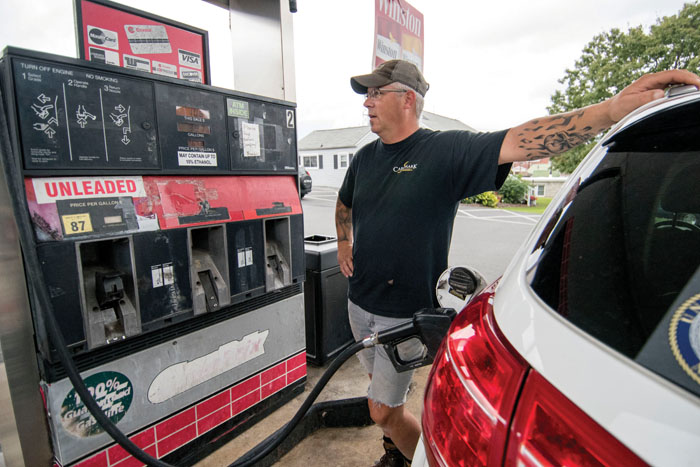 Eric Lipe tops off his tank at the A&L Mini Mart in Faith. Motorists in the Salisbury area are paying a higher price for gasoline in the wake of the storms in the Gulf states. On midday Friday most stations posted a price of $2.55 a gallon for regular gasoline. Jon C. Lakey/Salisbury Post

SALISBURY — The devastation that Hurricane Harvey left in its wake forced at least eight Texas oil refineries to shut down.

Residents across the Southeast are feeling the effects of rising fuel prices, including Rowan County gas station employees and customers.

Robbin Euart has been working at A&L Mini Mart in Faith for more than 20 years and has seen her fair share of gas shortages.

Although Hurricane Harvey is one of the biggest storms to hit the U.S. in years, Euart said a gas shortage following any storm is familiar territory to her.

“(The franchise) calls and tells us what to go up. They control the price; we don’t,” Euart said.

The Associated Press reported that national average price for regular gas was $2.56 a gallon by late Friday afternoon, an increase of 20 cents in the last week, according to GasBuddy.

The nationwide average was already higher than most experts had given as a worst-case scenario when flooding from the devastating storm began knocking out refineries along the Texas Gulf Coast a week ago.

Two of the leading price-forecasting analysts, GasBuddy’s Patrick DeHaan and Tom Kloza of the Oil Price Information Service, now see the national average peaking as high as $2.75 a gallon in the next few days, according to AP.

Many stations in the Dallas area were out of gas Friday, and those that had it were often charging more than $3 a gallon — and drawing long lines of desperate drivers.

Like many local convenience stores, A&L Mini Mart is part of a franchise that supplies its gas.

Euart said the store is still responsible for changing the price on its signs, which means she has kept track of the climbing prices.

Euart said that since Monday, the franchise has called and told the store to raise prices by an average of 10 cents a day.

She said a fair number of customers filled up this week to avoid paying higher prices next week.

There were also some customers worried about whether stores will run out of gas. Euart said that happened after a previous storm.

“One man told me that his wife is on dialysis and he wanted to make sure that he had enough gas to get there,” Euart said.

As of Friday afternoon, prices in Rowan County hovered around $2.55 a gallon.

Cleveland resident Christopher Roberson, who works for a construction company in Charlotte, said he has been filling up in Rowan County because of higher prices in Charlotte.

“In Charlotte, it’s already in the $3’s,” Roberson said. “I always try to fill up here — between here and Mooresville.”

He said he’s concerned about higher gas prices in general, but particularly because of his long commute to work.

According to the Oil Price Information Service, about one-quarter of the Gulf Coast’s oil refining capacity was taken offline in the wake of Hurricane Harvey.

One declared a state of emergency so that the limit on hours that fuel vehicles could travel in and through North Carolina would be waived temporarily.

The other executive order declared an “abnormal market disruption” for gas in North Carolina in light of the temporary shutdown of Texas and Louisiana fuel refineries. That means Cooper put into effect the state’s price gouging law that prevents overcharging in a time of crisis for 45 days.

A news release from the governor’s office encouraged North Carolinians who spot potential gas price gouging to report it to the North Carolina Attorney General’s Office at ncdoj.gov or at 877-5-NO-SCAM.