Plenty of tough matches in Labor Day golf first round 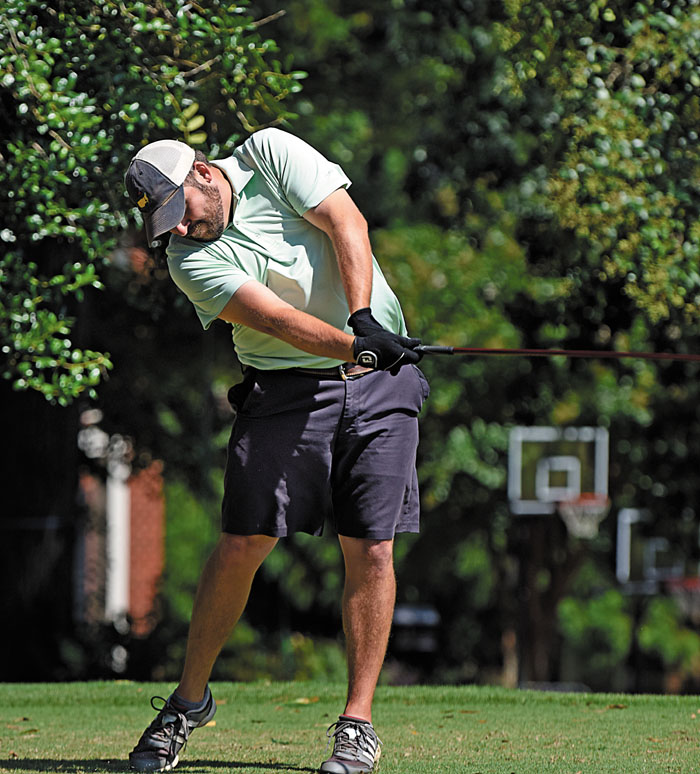 SALISBURY – Given the talent and experience in this year’s Labor Day golf tournament, it is hard to qualify any result in the championship flight as an upset.

The top group in the tournament includes two former championship teams and four individuals who have been part of five other overall titles.

Based on qualifying seeding, however, there were some “upsets” as usual with the second, third, fifth, and seventh-seeded teams going down during Saturday’s opening round competition at the Country Club of Salisbury.

“I would have been upset if we had lost,” said Justin Lefler, who teamed with Jared Barnette to claim medalist honors and top seed with a qualifying score of 65. “But everybody in the championship flight has a real chance to win so there are no true upsets.”

Lefler and Barnette rolled past 16-seeded Caleb Barnhardt and Josh Triplett, 4 & 3, by winning the first three holes of the match and posting five birdies for the day. They have teamed together for the last five years in the event, but this is the first time they have won on opening day in the championship flight. “It was a true team effort,” Barnette said. “We brother-in-law’d it well all day.”

Six of the eight championship matches were won by wide margins. The tightest contest was claimed by No. 12 seed Clark Alcorn and former Davidson College golfer Alex Nianouris, 1-up over No. 5, brothers Michael and Mitchell Swaringen. The Swaringens were 1-up after 15 holes, but Nianouris hit a chip within six inches on their 16th hole to square the match, then took the lead for good on their 17th hole with a par.

The winners like their chances going forward this weekend. “We have grown up playing together and playing this course,” Alcorn stated, “But tomorrow (Sunday) will be a telling match for us as far as our chance to win.”

Today’s quarterfinal foe for Clark and Nianouris will be the youngest but likely most dangerous team in the field — Michael Childress, 18, and Charlie Barr, 14, who was part of the winning team last year with Troy Beaver. The two, who are teammates this year at Cannon School in Concord, won handily over the 13th seeded Jon Allen and Derek Paschal, 5 and 4.

“We were down one after five holes,” Childress said,” and then we got a bit more comfortable from there.” Childress went on a tear with birdies at holes 8, 9, 11 and 13, to pull away, and that was just fine with Barr, who felt he did not play his best in the opening match. “I just made quite a few pars,” Barr said, “But didn’t really do anything great.”

Childress, a University of Richmond golf commit, was part of a winning Labor Day team at age 15 with veteran Charlie Graeber in 2014. “Now it feels weird being the old guy on our team,” Childress said with a grin.

One of the more dramatic finishes of the first day was turned in by the 14th seeded team of Lee Frick and Blake Wray. They overcame third seed Jason Correll and Seth Correll, 5&4, despite trailing by one after seven holes.

“We birdied eight to get even,” Frick said, “then caught fire at the end by going five-under for the last four holes.” The amazing finish was capped by a chipped in eagle shot on the 15th hole by Frick to close out the match. “It was a tough match but we finally got the ball to go in the hole.” he said.

Another intriguing match on opening day was a battle of two former championship teams. Joey Boley and Richard Cobb, the 2011 winners, edged out the 2012 winners, Ken Clarke and Chris Owen, 3 & 2. Cobb also won the tournament in 2005 and 2007, playing with Labor Day legend Mallory McDaniel.

The team of Tyler Mulkey and Jordan Taylor won the 8-9 battle against Austin Moyer and John Tuttle. Mulkey and Taylor face off against the top-seeded Barnette and Lefler in today’s quarterfinals.

The father-son team of Thad and Bryson Sprinkle, seeded 10th, knocked off No. 7 Wally Eidson and Kyle Venrick, 5 and 4. It was the first championship flight appearance for the Sprinkles. “We had a streak where we went birdie, birdie, eagle and that got us going,” said Thad Sprinkle, the dad. His son, Bryson, a standout golfer at East Rowan, had a solid performance. “I just hit it out there and keep it in play,” Thad said, “then I just let him (Bryson) free wheel and go big because he hits it so much farther than me.”

The final winning spot of the first round went to the veteran team of Keith Dorsett and Ryan Honeycutt, two familiar names in local tournaments. Dorsett was part of the 2004 Labor Day winning team and has been playing extremely well of late by claiming both the Rowan Masters and Billings Rowan Amateur titles this summer. Dorsett and Honeycutt beat the second-seeded, father-son team of Glen and Roy Dixon, 4 &3, with four birdies and a long string of pars.

“We had a good time today against a strong opponent,” Dorsett said. “But it is always a team effort in a match-play event like this.”

Quarterfinals and consolation rounds continue this morning with the championship to be decided on Monday afternoon. The championship flight winners’ tee times begin at 1 p.m. today.

No. 1 Jared Barnette and Justin Lefler def. No. 16 Caleb Barnhardt and Josh Triplett, 4 & 3

College Football: Bill Griffin gets the Hall of Fame…