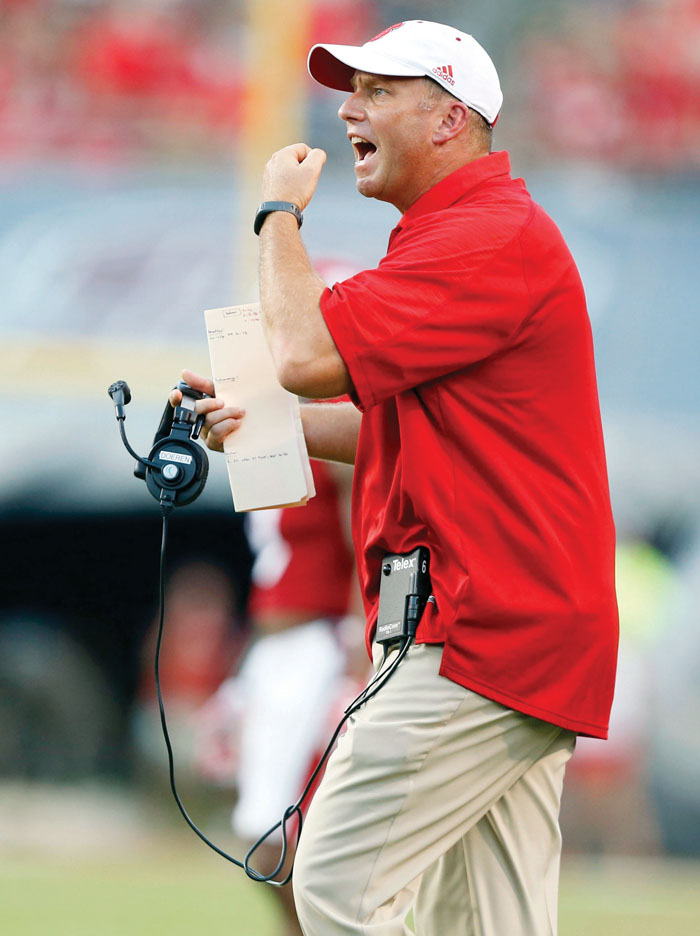 FILE - In this Sept. 17, 2016, file photo, North Carolina State head coach Dave Doeren argues a call during the first half of an NCAA college football game against Old Dominion at Carter-Finley Stadium in Raleigh, N.C. N.C. State is opening the season against a power-conference opponent for the first time under the fifth-year coach. (Ethan Hyman/The News & Observer via AP, File)

RALEIGH (AP) — North Carolina State coach Dave Doeren spent the offseason touting the Wolfpack’s depth and experience. Now his team gets a Saturday opener against a power-conference opponent — South Carolina in Charlotte — in the first test of whether the program is ready to take a leap in his fifth season.

“This is what we’ve been building,” senior Jaylen Samuels said. “This is what everybody has been waiting for.”

N.C. State (7-6) returns 18 starters from last year, including 11 seniors for the program’s highest number in at least a quarter-century. The list of returnees is headlined by quarterback Ryan Finley and a veteran defensive front led by defensive end Bradley Chubb, a preseason Associated Press all-America first-team pick.

Doeren figures it’s the right time for his program, considered a dark horse in a top-heavy Atlantic Coast Conference division, to open against a power-conference opponent for the first time in his tenure.

“I definitely feel as confident as I’ve felt about our depth,” Doeren said.

The Gamecocks (6-7) are in a different spot, coming off a three-year stretch in which they’ve gone 16-22. Coach Will Muschamp closed his first season frustrated by his team’s inability to consistently run the ball against the best competition or stop the run at key moments.

South Carolina boasts a returning quarterback in Jake Bentley, who started the last seven games of his freshman season, and has won 16 of 17 season openers.

“I think we’ve had a good camp, but talk is cheap,” Muschamp said. “We’ve got to go play on Saturday afternoon and play well, and that’s what we plan on doing.”

Some other things to know about Saturday’s matchup between the Wolfpack and Gamecocks:

BENTLEY BALL: South Carolina’s Jake Bentley began last year as a likely redshirt but starts this year as the center of the Gamecocks’ rising hopes. Bentley rallied the team to a 4-2 finish in the regular season to make a bowl game, a huge accomplishment for a team that went 3-9 a season earlier when coach Steve Spurrier resigned in the middle of the year.

WISE MOVE: N.C. State hopes graduate transfer Carson Wise solves its kicking woes. Wise, who played previously at Division II Carson-Newman, will start over Kyle Bambard — who made just 12 of 24 field goals in two seasons and missed a 33-yarder to beat Clemson last year. Bambard will handle kickoffs. “He’s just really level-headed,” coach Dave Doeren said of Wise. “That’s been impressive. So I’m excited to see him in the stadium, and obviously gameday is where it counts the most.”

MOORE RETURNS: South Carolina senior linebacker Skai Moore returns after missing last season because of neck fusion surgery to fix a herniated disc. The 6-foot-2, 218-pound Moore was the team’s leading tackler in 2013, 2014 and 2015. He can become the first in program history to do it all four years with a similar season this year. Moore is also returning to Bank of America Stadium, where he had two interceptions in the end zone to help beat North Carolina in 2015.

SECONDARY QUESTION: N.C. State has a veteran line backed by returning linebackers in Airius Moore and Jerod Fernandez, but the secondary is a question. That’s especially true with starting cornerback Mike Stevens out due to what coach Dave Doeren described as a lower-leg injury.